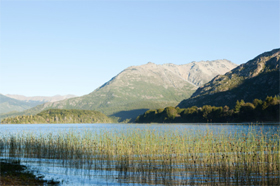 During my early years of marriage, I was friends with a man who loved hiking in the mountains and going nude in seclusion.  He was both naturalist[1] and naturist[2] in outlook, and he took me and my wife in that direction.  Naturally, when Andrei Micael was born, I advocated a more natural baptism than one with ‘holy water’ from a cold stone basin being poured onto his head by a Roman Catholic priest.  Instead, I wanted to trek into the mountains and dip him in a stream, just as John the Baptist[3] baptized the repentant Jews in the River Jordan.  Of course I did not realize that baptism was something one should do when an adult, rather than a child, for how can children repent? They have done nothing to repent from.  My true baptism I would make on myself, when I bathed away my past state in ritual purification on becoming Muslim.

My wife’s mother started to visit us in the summer, the first time just to see Andrei, I think.  Like my wife, she was a Roman Catholic.  Unlike her, however, she was an avid believer in the mediation of Mary, the mother of ‘God’, the saints in their graves, and the boy Jesus.  To this end, she wore a crucifix around her neck and assiduously visited the shrines of Mary (including the Sanctuary of Fatima[4] and Our Lady of Lourdes[5]) at least once a year, and made pilgrimage to the Sanctuary de Saint Benedict[6] every time she came to Braga, where my wife and I lived.  She had a small statue of Mary with child that she used to set up on its own special table (like an altar) in the corner of her bedroom, and she kept a battered old photograph of a fresco of Mary (the mother of Jesus), holding a cup with a bleeding heart, in her wallet.  The former she used to kneel to before going to bed every night, and the latter she would keep while travelling, taking it out to kiss when she wanted to pray.

To me, all these actions were abhorrent, totally against both my primitive concept of the Universal Force or Power, a Unique Creator and Sustainer that permeated the Universe, and also to God as He is described in the Bible.  I became determined to persuade my mother-in-law to stop her idolizing worship of (dead) human beings as mediators to the One Who Hears.  But how?

Back to the Bible

I first tried by using logic.  How can dead men hear? How do we know their piety? Was it not men who made them ‘saints’? And by whose authority were they made saints? Were they not men, like us? But all to no avail.  So finally I decided I would use the weapon of her own scripture because I knew that the First Commandment[7] in the Bible was,

“I am the Lord your God, Who took you out of Egypt and from bondage.  And you shall not take any gods besides Me.  You will not make graven images or likenesses of any creature that lives in the heavens above or the earth below, or in the water under the earth, nor will you bow down to them, or serve them.” (Exodus 20:2-5[8])

If that were the case, then there would be more evidence that God is only One, and immaterial, and only He could hear us.

Over the years that I sustained my regular (summer) persuasion with her, I began to appreciate that the Bible actually contradicted what the Church taught about the ‘god-ship’ of Jesus, and affirmed clearly that God was One.  It completely denied the license[9] we have taken to worship idols[10]  or use them as a focus of our prayer.  So my belief in the God of Abraham slowly increased until my only fear was that I might be wrong.  What if, despite my strong belief that it was not true, it was Jesus who sat on the Throne of Judgment on the Last Day? Then I would be in a pickle.  The evidence in the Bible was ambiguous on this point, since ‘The Revelation of St John[11]’ seemed to indicate that it would be him.

This was my state when I found the need to look for a job that would help me escape my heavy debts at home.  During this period, I decided to give up my job at the British Council in Portugal and venture a language school of my own in Braga.  I wanted to be near at hand for the raising of my son.  At the same time, I decided to buy a home, which would be like renting a flat, except that I would own the place at the end of the process.  My school, however, did not work out, and I ended up not only owing a lot of money to the bank for my house, but also for the starting capital I had borrowed.  When I closed my school two years after I opened it, I foolishly did not declare bankruptcy, instead using my ‘business card’ to become a freelance English teacher.  Although this helped me keep my feel I might just be able to survive, the capital I owed did not diminish appreciably.  I needed some get out plan.  My wife then suggested that I look for a well paid job abroad to deal with the problem, pointing out that many acquaintances had husbands abroad, and had amassed enough money to build homes for their families in the home country.

The day I decided I needed to find such a lucrative job abroad was a black day indeed.  I was in deep gloom because things were coming to a head.  I was unable to keep up with the interest repayments on loans from domestic appliances, the mortgage, our cars and the debts I had accumulated running a language school for three years at a loss, I saw blackness ahead of me – and no local means to climb out of the debt hole I was in.  I felt almost suicidal, thinking death would allow me to escape from debt.  I didn’t know, at the time, that debt was one of the things a person could be barred from paradise for, and that death did not mean you escaped your obligations.

One night I knelt by my bedside, facing the east, and poured out my trouble to God.  I told him I was in despair, at my tether’s end, and could not see myself able to support my wife and children, let alone myself.  I begged him to give me a way out, a way to a good life for us all.  Somehow, I knew he was listening, and my heart eased as I prayed.  Eventually, I felt comfortable enough to lay my head down again, and fall back to sleep.

The next few events proved He had answered my prayer.  The very next day, I was looking through the EFL Gazette and found several advertisements for British Council placements abroad.  When I pointed them out to her, my wife advised me to look for work in the Middle East or Far East where salaries were relatively high.  There and then, I applied to institutions in Oman, Saudi Arabia, Brunei, Taiwan, Japan and Korea.  The British Council gave me an interview, but I was not chosen for any of their places.  An employer in Taiwan chose me and offered me a job, but when I accepted, the process was never followed up by them.  Just as I was beginning to feel all the doors were closing in my face, one of my last choices, a university in Saudi Arabia, offered me a position as a lecturer of English, and I took it.  Praise be to God!  I thought He had answered me financially, but his real gift was to come from an unexpected direction.