Description: How the autobiography of Malcolm X guided a white, middle-class, American teenager from “cow country” to Islam. 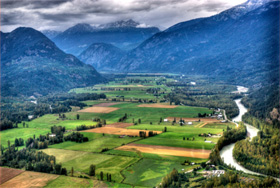 I have often been asked how I came to Islam.  I mean, it isn’t too often you see a white guy from “cow country” turn to Islam.  I guess the most amazing thing about the whole thing is where I started.  Now, I am not one of those stories of brothers who you hear were in gangs, addicted to crack, or worshiped devils at stone altars.  I come from quite a typical background.  I have two sisters; a brother; and both my parents are still married.  My father is an engineer; while my mother is a housewife (or domestic engineer, as she likes to say) and we are as middle-class as you can get.  My family lives in a small country hamlet, just to the south of nowhere.  To give you a glimpse of how rural it is, there is a general store about a mile from my house, where the lady who runs it say “ya’ll come back now, ya hear” when ever you leave the store.

Religion was always a strange subject in my house.  My father is an Irish-Catholic by birth and my mom is a Methodist.  We went to church on occasion, but for the most part, religion was a “spiritual” matter that you just had in your heart.  I can remember as a kid looking at a small figurine of Jesus (which I had “borrowed” from the family nativity set) and wondering why do we go to “number two” when we pray or want something?  Why don’t we just go to “number one”, God?  Growing up, the whole concept of the trinity never made since to me, but since I lived in a spiritual Christian family, this wasn’t really an issue.

As I got older and entered high school, I quickly noticed that I was a bit different.  In my school, like in most schools in America, there were basically four groups with whom you could be associated: the “Alternative”, the “preps”, the “crack-heads” or the African-Americans (being that 90% of the county I grew up in was white, they ended up being somewhat alienated and kept to themselves).  Then there was me.  I have to say looking back now, that this was one of the blessings of Allah.  I very much feel like Allah was protecting me from all sorts of things which, had gotten involved in them, could have brought me down later on.  For example, I was always in search of a “girlfriend”, much like any other typical high schooler.  However, whenever the situation presented itself for me to take advantage of, I always found myself overwhelmed with shyness and I wasn’t able to do anything, not even move my lips.  I am extremely grateful for this now, even if I wasn’t then.

Although I hung out with the “Alternative” group, I never really felt like I fit in.  They liked to talk about music, trash their friends, and do drugs or some other mindless pastime.  I, on the other hand, was interested in the Black Panthers, Medgar Evers, and Malcolm X.  This made me look a little odd to say the least and I received more than a few tags as being a “Black wannabe”.  It was at this time, while in the eleventh grade, that I began to read The Autobiography of Malcolm X, the ultimate anti-white leader, or so I was told.  I read his book, and the more I read it, the more I couldn’t put it down; his story was amazing to me.  He came from nothing and then…there he was.

But, it was the chapter entitled “Mecca” that would have the most profound effect on me.  In it, he told his story of how he was affected by the generosity and compassion of, not only the Muslims he met while making the Hajj, but also by Islam itself.  I read that and thought to myself, “who are these guys?”  So, I went to the school library and started to check out every book that I could about Islam.  I was amazed at what I read; here they believed in the same principals I has found so innate within myself.  They said that there was only One God, that Jesus was not his son, but a rightly guided Messenger and Prophet.  I was taken aback.  I knew that whatever this “Islam thing” was, I needed to be a part of it.

At that time I considered myself a Muslim.  If you had asked me what my religion was, I would have said Islam.  I hadn’t taken my official shahada mind you, but in my heart I was a Muslim.  I was a bit naïve at that point though.  I knew that Muslims were supposed to pray, but I didn’t know how many times, or how to pray and so on.  I didn’t know much, and there wasn’t anyone for me to learn from at that point.  I was just kind of walking around saying “hey, I’m Muslim”.  It was then that I got the jump-start that I needed.  A friend of mine got a bit agitated by me saying I was a Muslim all the time (I was a bit over zealous at this point) and said that I wasn’t really Muslim.  “You don’t even pray,” he told me.  I thought to myself, you know what…he’s right.  I knew I needed to take this being a Muslim thing a step further.  That’s where I ran into a problem.

Who were these Muslims?  I didn’t know a Muslim or where to meet any.  There wasn’t exactly a mosque down the block from my house you have to understand.  You could have literally found gold more easily than a Muslim where I lived.  So, I searched the phone book and came across a mosque in Washington D.C.  But, that was unfortunately about two and a half hours away and might as well have been two thousand miles away.  When I first called them I was so nervous.  Here I was about to talk to a Muslim!  They were very pleased by my enthusiasm towards Islam and my eagerness at becoming a Muslim.  But, they wanted me to come to the mosque.  This would of course be a problem.

At the time I was still in high school and under the reign of my parents, who also controlled my extended whereabouts, especially since it was the family vehicle that I was driving.  My chances of getting that car for a trip to D.C.  were slim at best.  What was I going to do?  I couldn’t get to the Muslims, so how was I going to be a Muslim.  I asked them if they could come down here, but that was to no avail.  I needed to do this now; I couldn’t just sit around for another year or two with this.  It was after much prodding that I finally convinced the brother to let me take my shahada right then and there, on the phone.  I guess that might have been a first…conversion by phone.

So, that is how I came to Islam.  I can truly say now, looking back on the whole story, that I was overwhelmingly blessed by the way Allah guided me to Islam.  I look back now and see my old friends from high school and how lost they are.  Then I look at myself.  I mean I know that I have more than a few rough edges and that I have much improving to do, not only as a Muslim, but also as a person in general.  But, I can’t help but feel a bit awed that I was guided and that Allah picked me to be guided and out of where?  Nowhere.

I look back and I think…what was it that guided me?  What could have led me to this?  This “religion of the Arabs”, that was so foreign to me that I would have needed a passport just to get in.  Then I realized that what happened to me was from Allah and that He alone has guided me.  I feel kind of awestruck when I think of it.  I mean, I don’t know why, but Allah picked me for this religion of guidance.  I feel like I have been saved from the Hell fire and plucked from the ashes.  It is this, my being guided to Islam by Allah and Allah alone, which is the greatest blessing that I have ever received.

Alhamdulillah. May God bless U.