Description: A brief introduction about the existence and abilities of Jinn. 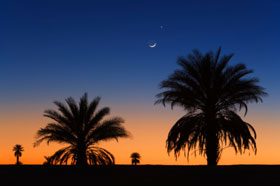 Throughout history man has always had a deep attraction for the supernatural and the unseen.  The existence of a world parallel to our own has always fascinated people.  This world is commonly referred to as the spirit world, and almost every set of people have some concept of one.  With some people, these spirits are no more then the souls of dead people- or ghosts.  With others, spirits are either the forces of good or the forces of evil - both battling against one another to gain influence over humanity.  However, both of these explanations are more in tune with folk tales and fantasy.  The true explanation of such a world comes from Islam.  Like every other way, Islam also claims to explain this realm of the unseen.  It is from this realm that Islam explains to us about the world of the Jinn.  The Islamic explanation of the Jinn provides us with so many answers to modem day mysteries.  Without the knowledge of this world, the Muslims would become like the non-Muslims and be running around looking for any old answer to come their way.  So, who or what are the Jinn?

The Jinn are beings created with free will, living on earth in a world parallel to mankind.  The Arabic word Jinn is from the verb ‘Janna’ which means to hide or conceal.  Thus, they are physically invisible from man as their description suggests.  This invisibility is one of the reasons why some people have denied their existence.  However, (as will be seen) the affect which the world of the Jinn has upon our world, is enough to refute this modern denial of one of God’s creation.  The origins of the Jinn can be traced from the Quran and the Sunnah.  God says:

“Indeed We created man from dried clay of black smooth mud.  And We created the Jinn before that from the smokeless flame of fire” (Quran 15:26-27)

Thus the Jinn were created before man.  As for their physical origin, then the Prophet, may the mercy and blessings of God be upon him, has confirmed the above verse when he said:

“The Angels were created from light and the Jinn from smokeless fire.” (Saheeh Muslim)

It is this description of the Jinn which tells us so much about them.  Because they were created from fire, their nature has generally been fiery and thus their relationship with man has been built upon this.  Like humans, they too are required to worship God and follow Islam.  Their purpose in life is exactly the same as ours, as God says:

Jinns can thus be Muslims or non-Muslims.  However, due to their fiery nature the majority of them are non-Muslims.  All these non-Muslim Jinns form a part of the army of the most famous Jinn, Satan[1].  Consequently, these disbelieving Jinns are also called devils.  Jinns also become Muslims, as they did in the time of the Prophet when a group of them were amazed by the recitation of the Quran.  God orders the Prophet to tell the people of this event:

“Say (O’ Muhammed): It has been revealed to me that a group of Jinn listened and said; ‘Indeed we have heard a marvelous Quran.  It guides unto righteousness so we have believed in it, and we will never make partners with our lord’.”(Quran 72:1-2)

In many aspects of their world, the Jinn are very similar to us.  They eat and drink, they marry, have children and they die.  The life span however, is far greater then ours.  Like us, they will also be subject to a Final Reckoning by God the Most High.  They will be present with mankind on the Day of Judgment and will either go to Paradise or Hell.

That which clearly distinguishes the Jinn from mankind, are their powers and abilities.  God has given them these powers as a test for them.  If they oppress others with them, then they will be held accountable.  By knowing of their powers, we can often make sense of much of the mysteries which go on around us.  One of the powers of the Jinn, is that they are able to take on any physical form they like.  Thus, they can appear as humans, animals trees and anything else.  Thousands of people have sighted strange looking creatures all over the world - and it seems more plausible all the sightings of such creatures may have been Jinns parading in different forms.

The ability to possess and take over the minds and bodies of other creatures is also a power which the Jinn have utilized greatly over the centuries.  This however, is something which has been prohibited to them as it is a great oppression to possess another being.  Human possession is something which has always brought about great attention.  But the true knowledge of this subject is rare.  Over the last 3 decades the subject of possession has become very commercialized.  During the 70’s, films such as The Exorcist and Rosemary’s Baby were used to educate people about possession.  However, because such institutions (the film industry) were heavily influenced by Christianity, knowledge of the subject was non-existent.  Rather then educate people about Jinn possession, films such as The Exorcist just tended to scare the living daylights out of us!

Only through Islam can we understand such a phenomena.  We know as Muslims, that Jinns possess people for many reasons.  Sometimes it is because the Jinn or its family has been hurt accidentally.  It could be because the Jinn has fallen in love with the person.  However, most of the time possession occurs because the Jinn is simply malicious and wicked.  For this reason we have been commanded to recite the Quran frequently in our houses as the Prophet said:

“Indeed, Satan flees from the house in which Surah Al-Baqarah (the 2nd chapter of the Quran) is recited.” (Al-Tirmidhi)

If a person does become possessed, then the name of God has to be used in expelling the Jinn.  If we look at the practice of the Prophet and his companions, we find many invocations to exorcise the Jinn.  All of them invoke God to help the possessed person.  How contrary this is to many modern-day exorcists.  Many exorcists, often invoke the names of others besides God to exorcise the Jinn.  When the Jinn does leave, these people believe that their way was successful.  However, this is a ploy of the Jinn, as it knows that if it obeys the exorcist, then it has succeeded in making him worship others besides God.  The Jinn often returns when the exorcist leaves, as it knows that nothing except the words of God can stop it from oppressing others.

It is not only humans which are possessed, but also animals, trees and other objects.  By doing this, the evil Jinn hope to make people worship others besides God.  The possession of idols is one way to do this.  Not so long ago the world-wide phenomenon of Hindu idols drinking milk, shocked the world.  From Bombay to London, Delhi to California, countless idols were lapping up milk.  Ganesh the elephant god, Hanuman the monkey god and even Shiva lingam, the male private organ (!), all seemed to guzzle down the milk as if there was no tomorrow! Unfortunately people were taken in by this and many flocked to feed the Hindu gods.  This feat was undoubtedly done by the Jinn as a classic attempt to make people worship false gods.

[1] Unlike Christianity, Islam maintains that Satan (Lucifer) was from the Jinn and not an angel.  Angels do not have a free will to disobey.

Alhamdullilah. I believe I'm well on the way to quenching my thirst for enlightenment through your website. May Almighty Allah bestow His Mercy & Blessings on all those contribute towards a better understanding of Islam.

I want to learn more, the story is interesting. However, I am not cinvince about the jinn existence. Unlike the Holy spirit, I have experince Him and the bible also mention it in the books of Acts 2:1–31)

this post enhances knowledge about Allah and sunnah . jazakumullah kairan

Thank u very mach and may Allah bless u with more knowledge...