The Major Signs of the Day of Judgment (part 3 of 7): The False Messiah I

Description: The following series of articles mention the Major Signs that will occur shortly before the end of the world and the coming of the Day of Judgment.  This part includes the sayings of the Prophet Muhammad on the coming of the false Messiah, how to recognize him by certain physical features and other special signs. 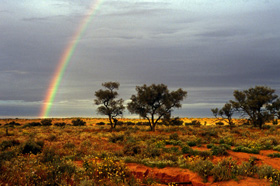 A brief discussion shall be given of each of the major signs mentioned by the Prophet, may the mercy and blessings of God be upon him, in the above hadeeth.[1]  Obviously, since this is a discussion related to matters of the “unseen,” that is, matters that humans have yet to witness and experience, much of the discussion will be restricted to exactly what has been mentioned in the texts of the Quran or the Sunnah.

“There has never been a prophet who has not warned the Nation of that one-eyed liar (the Dajjaal).” (Saheeh Al-Bukhari

Furthermore, the Prophet, as recorded in authentic hadeeth, used to seek refuge in God during his prayers from the trials of the false messiah.

The various hadeeth of the Prophet provide a great deal of information about the Dajjaal.  The Prophet, for example, made it clear that he is a human being.[3]  In general, the true believer should not be deceived by the Dajjaal because the Prophet has given such a clear description of him that there is very little room for him to deceive a believer.  However, this emphasizes the importance of knowledge in Islam.  If someone is completely unaware of how the Prophet described the Dajjaal, then it would not be surprising that he may fall for some of the tricks and deception of this evil being.

The numerous hadeeth about the Dajjaal include a description of the Dajjaal’s physical features.  These hadeeth include the following:

Muslim recorded that Ibn Umar narrated that God’s Messenger made a mention of Dajjaal in the presence of the people and said: “God is not one-eyed and behold that Dajjaal is blind in the right eye and his eye would be like a floating grape.”

In another hadeeth recorded by Imam Muslim and others, the Prophet said: “There would be written three (Arabic) letters: Kaaf[4]  Faa[5]  and Raa[6]  These three letters in this order form the basis for Arabic word “Kaafir” which means disbeliever, between the eyes of the Dajjaal.”  In another hadeeth, the Prophet stated that every Muslim would be able to read those letters.

The Prophet also described some of what the Dajjaal would come with.  For example, Imam Muslim recorded that the Prophet said:

The Companion of the Prophet Hudhaifah similarly stated, “I know more than you as to what there would be along with the Dajjaal.  There would be along with him two canals (one flowing with water) and the other one (having) fire (within it), and what you would see as fire would be water and what you would see as water would be fire.  So he who among you is able to see that and is desirous of water should drink out of that which he sees as fire.” (Muslim)

Like all religious deceivers, those who are cognizant of the truth will be able to see behind his amazing schemes and tricks.  The following hadeeth makes this point very clear. Abu Saeed al-Khudri reported that God’s Messenger one day gave a detailed account of the Dajjaal, and in that he mentioned the following:

“He would come but would not be allowed to enter the mountain passes to Medina.  So he will come to stop at some tracts of land (which contain high concentrations of salt and wherein seepage occurs causing them to be barren) adjacent to the city of Medina, and a person who would come out (to where the Dajjaal is) and say to him, ‘I bear testimony to the fact that you are the Dajjaal about whom God’s Messenger (may peace be upon him) had informed us.’  The Dajjaal would then say (to his followers), ‘What would be your opinion if I were to kill this (person) and then bring him back to life, even then would you harbor some doubt in this matter?’  They would respond, ‘No.’  He would then kill (the man) and then bring him back to life.  When he would bring that person back to life, he would say, ‘By God, I had no better proof of the fact (that you are a Dajjaal) than at the present time.’  The Dajjaal would then make an attempt to kill him (again) but he would not be able to do so.”

[1] In this short article, the Mahdi will not be discussed for the following reason: Although the coming of the Mahdi is affirmed via numerous hadeeth of the Prophet, the Prophet did not mention his coming in the hadeeth that list major signs of the Day of Judgment.

[2] Actually, the Prophet spoke about many great liars and deceivers, which is what the word dajjaal implies, who will appear before the Day of Judgment.  For example, al-Bukhari and Muslim record that the Prophet said, “The Last Hour would not come until there would arise about thirty impostors, liars, and each one of them would claim that he is a messenger of God.” Those can be considered “minor dajjaals” and from the minor signs of the Day of Judgment.  The “major dajjaal” is the greater sign of the Day of Judgment and concerning whom the Prophet, may the mercy and blessings of God be upon him, reserved his greatest warnings.

[3] There are some who have interpreted the Dajjaal to be, for example, certain un-Islamic ideologies, nations, or worldviews, and so forth.  Although one should learn from the trials that will appear at the hands of the Dajjaal and avoid such trials no matter where they may come from, it is incorrect, though, to distort the clear meaning of the hadeeth and claim that the Dajjaal is any other than a human being who will appear shortly becoming the descending of Jesus.

[4] Kaaf which is like the letter “k” in English in phonetically speaking [and not in terms of how it is written].

[5] Faa which is like the letter “f” in English phonetically speaking [and not in terms of how it is written].

[6] Raa which is closest to the Spanish “r” phonetically speaking [and not in terms of how is written].

So much important information, I just can't stop seeking. Islam is the truth and all praises are due to Allah. Valuable words..