God’s Preservation of the Sunnah (part 3 of 7): The Importance and History of the Isnad

Description: The following series of articles discusses the means used throughout history to ensure that the Sunnah, or teachings of Prophet Muhammad, remained authentically preserved and free from alteration and interpolation.  Part Three: The importance and history of the Isnad from the earliest years. 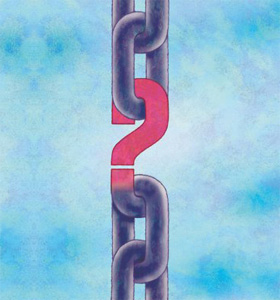 Another important tool used in the preservation of hadeeth was the Isnad system that was developed uniquely by the Muslim nation.  The Isnad system is where one states his sources of information, in turn tracing that narrative all the way back to the Prophet, may the mercy and blessings of God be upon himmay God bless him.

The importance of the Isnad has been eloquently stated by Abdullah ibn al-Mubaarak who said, “The Isnad is part of the religion.  If it were not for the Isnad anyone would say whatever he wishes to say.”[1]  Indeed, the Isnad has been essential in separating the authentic from the weak hadeeth and in identifying the fabricated hadeeth.  Even today, no one can dare narrate a hadeeth without possibly being asked to provide the source of that hadeeth.  Ibn al-Mubaarak continued and said, “If you ask the person where he got the hadeeth from he will [be forced to] become silent.”  The Isnad acted and acts as a type of guarantee or safeguard for the authenticity of the hadeeth.  The early scholars of hadeeth would not even consider a hadeeth if it had no known Isnad to it.

Concerning the importance of the Isnad, Sufyaan al-Thauri (d. 161) said, “The Isnad is the sword of the believer.  Without his sword with him with what will he fight?”  By the use of the Isnad, the Muslim scholars were able to eradicate (or “fight”) the innovations that some people tried to bring into Islam.  Muhammad ibn Seereen (d. 110), Anas ibn Seereen, Al-Dhahaak and Uqba ibn Naafi have all been reported to have said, “This knowledge [of hadeeth] is the religion, therefore, look to see from whom you are taking your religion.”[2]  Since the Sunnah forms an essential part of Islam, accepting hadeeth from a certain person is similar to taking one’s religion from him.  Hence, one must be careful only to take his religion from people who are trustworthy and who can trace what they have said back to the Prophet and this can only be done through the use of the Isnad.

This system was even more of a safeguard than today’s system of publication and copyrighting.  Hamidullah wrote:

“Modern scholars quote, in learned works, the sources of important statements of facts.  But even in the most carefully documented works, there are two drawbacks:

(a)  In case of published works, there is little or no possibility of verifying whether there are any misprints or other inaccuracies¾ this would not happen if one were to depend on a work only after hearing [it] from the author himself, or obtaining a copy certified by the author, or¾ in case of old works¾ by those who have had the opportunity of hearing it from the author, or his authorized transmitter.

(b)  One is contented now-a-days with one’s immediate source, without much caring to trace the preceding sources of that source, and mounting in seriatim up to the eye-witness of the event.  In Hadeeth works the case has been different…”[3]

In conclusion, one may state that the Isnad is an essential component of every hadeeth as without it there is no way for anyone to verify the authenticity of the narration.  Abdullah ibn al-Mubaarak certainly spoke the truth when he said that without the Isnad anyone is free to say whatever he wishes to say and claim that it is part of the religion of Islam.[4]  The importance of the Isnad is, in fact, very obvious and very few have ever questioned its importance.  More important, therefore, is a discussion of when the Isnad began to be used for if it were not until a long time after the death of the Prophet, it would, in fact, be useless.

In his Ph.D. dissertation, Umar Fullaatah has discussed the history of the Isnad in great detail.  Due to space limitations, it is not possible to present his discussion in detail.  However, he has made the following important conclusions:

Concerning when the Isnad was first used with respect to the transmitting of hadeeth, he states that, by default, the Companions used to use Isnads but since there was usually no intermediary between them and the Messenger of God it was not obvious that they were relating through the Isnad.  The Companions would either narrate the hadeeth in a manner that made it clear that they heard it directly from the Prophet, or in a manner that made it clear that they may not have heard that particular hadeeth directly from the Prophet.  Fullaatah states that the vast majority of the hadeeth of the Companions were those hadeeth that they had heard directly from the Messenger of God.  Therefore, the Isnad was first used during the time of the Companions although, it may be said, that it was hardly noticeable.

[1] Quoted by Imam Muslim in the introduction to his  Sahih in the chapter entitled, “Expounding on the point that the  Isnad is part of the religion.”