Christian Scholars Recognize Contradictions in the Bible (part 1 of 7): Introduction

Description: A look at what some of the leading Christian Scholars have said about the authenticity of the Bible.

“Then woe to those who write the book with their own hands and then say: ‘This is from God’, to traffic with it for a miserable price.  Woe to them for what their hands do write and for the gain they make thereby.” (Quran 2:79)

“And when there came to them a messenger from God, Confirming what was with them, a party of the people of the book threw away the book of God behind their backs as if (it had been something) they did not know.” (Quran 2:101)

“Ye shall not add unto the word which I (God) command you, neither shall ye diminish [ought] from it, that ye may keep the commandments of the Lord your God which I command you.” (Deuteronomy 4:2) 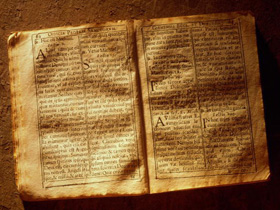 “..Yes, the Bible is human, although some out of zeal which is not according to knowledge, have denied this.  Those books have passed through the minds of men, are written in the language of men, were penned by the hands of men and bear in their style the characteristics of men….It is Human, Yet Divine,”[1]

“...Not so the New Testament...There is condensation and editing; there is choice reproduction and witness.  The Gospels have come through the mind of the church behind the authors.  They represent experience and history...”[2]

“It is well known that the primitive Christian Gospel was initially transmitted by word of mouth and that this oral tradition resulted in variant reporting of word and deed.  It is equally true that when the Christian record was committed to writing it continued to be the subject of verbal variation.  Involuntary and intentional, at the hands of scribes and editors.”[3]

“Yet, as a matter of fact, every book of the New Testament with the exception of the four great Epistles of St. Paul is at present more or less the subject of controversy, and interpolations are asserted even in these.”[4]

Dr. Lobegott Friedrich Konstantin Von Tischendorf, one of the most adamant conservative Christian defenders of the Trinity was himself driven to admit that:

After listing many examples of contradictory statements in the Bible, Dr. Frederic Kenyon says:

“Besides the larger discrepancies, such as these, there is scarcely a verse in which there is not some variation of phrase in some copies [of the ancient manuscripts from which the Bible has been collected].  No one can say that these additions or omissions or alterations are matters of mere indifference”[6]

Throughout this book you will find countless other similar quotations from some of Christendom’s leading scholars.  Let us suffice with these for now.

Christians are, in general, good and decent people, and the stronger their convictions the more decent they are.  This is attested to in the noble Quran:

“...and nearest among them (men) in love to the believers will you find those who say ‘we are Christians’: because amongst these are men devoted to learning and men who have renounced the world, and they are not arrogant.  And when they listen to the revelation received by the messenger (Muhammad), you will see their eyes overflowing with tears for they recognize the truth: They pray: ‘Our Lord!  we believe; write us down among the witnesses.’” (Quran 5:82-83)

All biblical “versions” of the Bible prior to the revised version of 1881 were dependent upon the “Ancient Copies” (those dating between five to six hundred years after Jesus).  The revisers of the Revised Standard Version (RSV) 1952 were the first biblical scholars to have access to the “MOST ancient copies” which date fully three to four hundred years after Christ.  It is only logical for us to concur that the closer a document is to the source the more authentic it is.  Let us see what is the opinion of Christendom with regard to the most revised version of the Bible (revised in 1952 and then again in 1971):

“The most accurate and close rendering of the original” - (The Times)

The publishers themselves (Collins) mention on page 10 of their notes:

Let us see what these thirty two Christian scholars of the highest eminence backed by fifty cooperating Christian denominations have to say about the Authorized Version (AV), or as it is better known, the King James Version (KJV).  In the preface of the RSV 1971 we find the following:

“...Yet the King James Version has GRAVE DEFECTS..”

They go on to caution us that:

“...That these defects are SO MANY AND SO SERIOUS as to call for revision”

The Jehovah’s Witnesses in their “AWAKE” Magazine dated 8th September 1957 published the following headline: “50,000 Errors in the Bible” wherein they say “..there are probably 50,000 errors in the Bible...errors which have crept into the Bible text...50,000 such serious errors...”  After all of this, however, they go on to say: “...as a whole the Bible is accurate.”  Let us have a look at only a very few of these errors.

[6] Our Bible and the Ancient Manuscripts, Dr. Frederic Kenyon, Eyre and Spottiswoode, p. 3

Next: Christian Scholars Recognize Contradictions in the Bible (part 2 of 7): Examples of Interpolation