Salman the Persian, Zoroastrian, Persia (part 1 of 2): From Zoroastrianism to Christianity

Description: One of the greatest of companions, Salman the Persian, once Zoroastrian (Magian) narrates his story of his search for the true religion of God.  Part One: From Zoroastrianism to Christianity. 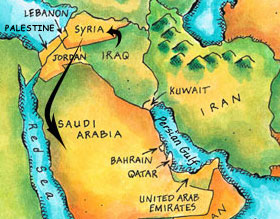 The blessed Companion of the Prophet Muhammad, may the mercy and blessings of God be upon him, Salman al-Farisi narrates[1]  his journey to Islam as follows:

“I was a Persian man from the people of Isfahaan[2]  from a town known as Jayi.  My father was the town chief.  To him, I was the most beloved creature of God.  His love for me reached the point to which he trusted me to supervise the fire[3] he lit.  He would not let it die down.

My father owned a large area of fertile land.  One day, while busy with his construction, he told me to go to his land and fulfill some chores he desired.  On my way to his land, I came across a Christian church.  I heard the sound of people praying inside.  I did not know how people lived outside, for my father kept me confined to his house!  So when I came across those people [in the church] and I heard their voices, I went inside to watch what they were doing.”

When I saw them, I liked their prayers and became interested in their religion.  I said [to myself], “By God, this religion is better than that of ours.”  By God, I did not leave them until sunset.  I did not return to my father’s Land.

I asked [i.e., the people of the church].  “From where did this religion originate?”

I returned to my father who had become worried and sent [someone] after me.  Upon my arrival, he said, ‘O son!  Where have you been?  Didn’t I entrust you with an assignment?”

I said, “My father, I came across some people praying in their church and I liked their religion.  By God I stayed with them until sunset.”

My father said, “My Son!  There is no good in that religion; the religion of you and your forefathers’ is better.’ ”

“No, by God, it is better than our religion.”

He threatened me, chained me by my feet and kept me confined to his home.  I sent a message to the Christians requesting them to inform me of the arrival of any Christian trade caravan coming from Al-Shaam.  A trade caravan arrived and they informed me, so I then told [the Christians] to let me know once the people of the caravan finish their business and set off to return to their country.  I [indeed] was informed [by them] when the people of Al-Shaam finished their business and were about to set off to their country, so I then let loose the chains from my feet and accompanied [the caravan] until we reached Al-Shaam.

Upon my arrival I asked, “Who is the best amongst the people of this religion [of yours]?”

I went to him and said, “I like this religion, and I would love to be with you and serve you in your church, in order that I may learn from you and pray with you.”

He said, “You may enter and stay with me,” so I joined him.

After some time, Salman discovered something of the bishop.  He was a bad man who ordered and motivated his people to pay charity, only to keep it for himself.  He did not give it to the poor.  He had heaped up seven jars of gold and silver!  Salman continued:

I despised him because of his deeds.

He [the bishop] died.  The Christians gathered to bury him.  I informed them that he was a bad man who ordered and motivated people to give him their charity only to keep it for himself, and that he did not give any of it to the poor.  They said, “How do you know this?”

I replied, “I can show you his treasure.”

I showed them the place [where he kept it] and they recovered from it seven jars heaped up with gold and silver.  When they saw it they said, “By God we will never bury him.”  So they crucified him and stoned him.[5]

They replaced their bishop.  I never saw anyone [from them] who prayed better than him [the new bishop]; nor a man more detached from this worldly life and attached to the Hereafter, nor a person more committed to working day and night.  I loved him more than anyone else I loved before.

I stayed with him for sometime before his death.  When his death approached I told him, “O [so and so], I stayed with you and loved you more than anything else I loved before.  Now the Decree of God [i.e., death] has come, so who do you recommend for me [to keep to], and with what do you order me?”

The bishop said “By God!  People are in total loss; they have altered and changed [the religion] they were upon.  I do not know of anyone who is still holding to the religion I am upon except a man in al-Musil,[6]  so join him [and he gave me his name].”

When the man died, Salman moved to al-Musil and met the person he recommended…

I said to him, “[Such & such person] at the time of his death  recommended me to join you.  He told me that you are holding to the same [religion] as him.”  I stayed with him and found him to be the best man holding on to the matter [religion]of his  companion.

Soon he died.  When death approached him, Salman requested of him [as he did earlier with his first companion] to recommend another person who was upon the same religion.

The man said, “By God!  I don’t know of anyone on the same matter [religion] as ours except a man in Naseebeen[7]  and his name is [such and such], so go and join him.”

Following his death, I traveled to the man of Naseebeen.”  Salman found the man and stayed with him for a while.  The same incidents occurred.  Death approached and before he died, Salman came to the man and asked for his advice as to whom and where to go.  The man recommended that Salman join another man in Amuria[8]  who was also upon the same religion.

Salman moved to Amuria after his companion died.  He found his new reference and joined him on his religion.  Salman [at that time] worked and, “earned some cows and one sheep.”

Death approached the man of Amuria.  Salman repeated his requests, but [this time] the answer was different.

The man said, “O son!  I don’t know of anyone who is upon the same [religion] as we are.  However, a Prophet will emerge in your lifetime, and this Prophet is on the same religion as Abraham.”

The man described this Prophet, saying, “He will be sent with the same religion as Abraham.  He will come from the land of Arabia and will migrate to a place located in between two lands filled with black stones [as if burned by fire].  There are palm trees spread in the midst of these two lands.  He can be recognized by certain signs.  He [will accept] and eat [from] the [food] which has been given as a gift, but will not eat from charity.  The seal of Prophethood will be between his shoulders.  If you can move to that land, then do so.”

[2] Isfahaan: A Region in northwest Iran.

[3]  His father was a Magean who worshipped fire.

[4] Al-Shaam: It encompasses the areas known today as Lebanon, Syria, Palestine, and Jordan

[5] An important point to note here is that Salman did not turn away from what he thought was the truth at that time because of the ac­tions of one person. He did not say, “Look at these Christians! The best of them is so evil!” Rather, he understood that he had to judge the religion by its beliefs, and not by its adherents.

[8] Amuria: A town that was part of the Eastern Region of the Roman Empire.

Next: Salman the Persian, Zoroastrian, Persia (part 2 of 2): From Christianity to Islam

salam-aleikum, very helpful lifestory. my heart goes out to the many people who, like myself, have wandered for years in various forms of christianity, somehow knowing in their hearts there is another way, a pure way, a complete way to live, to relate rightly to oneanother, and to serve Allah.