Description: An examination of the concept that Jesus is the son of God from Christian sources.  The meaning of the term “Son of God” in the Old and New Testament.

that a cat has only nine lives.” 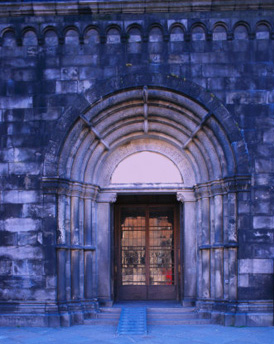 Son of God, son of David, or son of Man?  Jesus is identified as “son of David” fourteen times in the New Testament, starting with the very first verse (Matthew 1:1).  The Gospel of Luke documents forty-one generations between Jesus and David, while Matthew lists twenty-six.  Jesus, a distant descendant, can only wear the “son of David” title metaphorically.  But how then should we understand the title, “son of God?”

The “Trilemma,” a common proposal of Christian missionaries, states that “Jesus was either a lunatic, a liar, or the Son of God, as he claimed to be.”  For the sake of argument, let’s agree that Jesus was neither a lunatic nor a liar.  Let’s also agree he was precisely what he claimed to be.  But what, exactly, was that?  Jesus called himself “Son of Man” frequently, consistently, perhaps even emphatically, but where did he call himself “Son of God?”

Let’s back up.  What does “Son of God” mean in the first place?  No legitimate Christian sect suggests that God took a wife and had a child, and most certainly none conceive that God fathered a child through a human mother outside of marriage.  Furthermore, to suggest that God physically mated with an element of His creation is so far beyond the limits of religious tolerance as to plummet down the sheer cliff of blasphemy, chasing the mythology of the Greeks.

With no rational explanation available within the tenets of Christian doctrine, the only avenue for closure is to claim yet one more doctrinal mystery.  Here is where the Muslim recalls the question posed in the Quran:

…while others shout, “But God can do anything!”  The Islamic position, however, is that God doesn’t do inappropriate things, only Godly things.  In the Islamic viewpoint, God’s character is integral with His being and consistent with His majesty.

So again, what does “Son of God” mean?  And if Jesus Christ has exclusive rights to the term, why does the Bible record, “...for I (God) am a father to Israel, and Ephraim (i.e. Israel) is my firstborn” (Jeremiah 31:9) and, “...Israel is My son, even my firstborn” (Exodus 4:22)?  Taken in the context of Romans 8:14, which reads, “For as many as are led by the Spirit of God, they are the sons of God,” many scholars conclude that “Son of God” is metaphorical and, as with christos, doesn’t imply exclusivity.  After all, The Oxford Dictionary of the Jewish Religion confirms that in Jewish idiom “Son of God” is clearly metaphorical.  To quote, “Son of God, term occasionally found in Jewish literature, biblical and post-biblical, but nowhere implying physical descent from the Godhead.”[1]  Hasting’s Bible Dictionary comments:

In Semitic usage “sonship” is a conception somewhat loosely employed to denote moral rather than physical or metaphysical relationship.  Thus “sons of Belial” (Jg 19:22 etc.) are wicked men, not descendants of Belial; and in the NT the “children of the bridechamber” are wedding guests.  So a “son of God” is a man, or even a people, who reflect the character of God.  There is little evidence that the title was used in Jewish circles of the Messiah, and a sonship which implied more than a moral relationship would be contrary to Jewish monotheism.[2]

Those who rebut by quoting Matthew 3:17 (“And suddenly a voice came from heaven, saying, ‘This is My beloved son, in whom I am well pleased’”) have overlooked the point that the Bible describes many people, Israel and Adam included, as “sons of God.”  Both II Samuel 7:13-14 and I Chronicles 22:10 read, “He (Solomon) shall build a house for My name, and I will establish the throne of his kingdom forever.  I will be his Father, and he shall be My son.”

Entire nations are referred to as sons, or children of God.  Examples include:

Genesis 6:2, “That the sons of God saw the daughters of men…”

Genesis 6:4, “There were giants on the earth in those days, and also afterward, when the sons of God came in to the daughters of men…”

Deuteronomy 14:1, “Ye are the children of the Lord your God.”

Job 1:6, “Now there was a day when the sons of God came to present themselves before the LORD…”

Job 2:1, “Again there was a day when the sons of God came to present themselves before the LORD…”

Job 38:7, “When the morning stars sang together, and all the sons of God shouted for joy?”

Philippians 2:15, “that you may become blameless and harmless, children of God without fault in the midst of a crooked and perverse generation…”

1 John 3:1-2, “Behold what manner of love the Father has bestowed on us, that we should be called children of God! … Beloved, now we are children of God…”

In Matthew 5:9 Jesus says, “Blessed are the peacemakers, for they shall be called sons of God.”  Later in Matthew 5:45, Jesus prescribed to his followers the attainment of noble attributes, “that you may be sons of your Father in heaven.”  Not exclusively his Father, but their Father …

The above excerpt is taken from Dr. Brown's forthcoming book, MisGod'ed, which is expected to be published along with its sequel, God'ed.  Both books can be viewed on Dr. Brown's website, www.LevelTruth.com.  Dr. Brown can be contacted at BrownL38@yahoo.com