What is a Miracle?

Description: The difference between miracles, karamahs and magic. 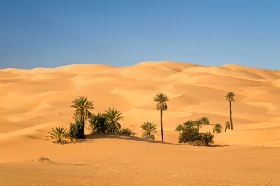 Islam defines a miracle as an extraordinary act or event that is contrary to the laws of nature and can only come about through the direct intervention of God Almighty Himself.  The Arabic word for miracle is mu’jizah.  It stems from the word ajz, meaning something that incapacitates, cannot be resisted, unique.  According to Islam, miracles are performed by the permission of God, by the Prophets of God.  Miracles are not magic, which is by definition a trick or illusion, nor is a miracle an event brought about by a learned righteous people who are not Prophets of God.  These events are called karamahs.  Thus we find three distinct categories, miracles, karamahs and magic.

God sent the Prophets and Messengers primarily to guide humankind.  They were humans, of outstanding character, pious and trustworthy, that the people could emulate and look to for direction.  They were not gods, demi-gods or saints with divine qualities, rather they were mere mortals charged with a difficult task.  They possessed exceptional characteristics because they were obligated to face extraordinary trials and tribulations in order to spread the message to worship God Alone.

In order to make each Prophet credible in his particular time and place, God granted them miracles, pertinent, relevant and understandable to the people to whom they were sent.  In the time of Moses magic and sorcery were prevalent therefore Moses’ miracles appealed to the people he was sent to guide.  In the time of Muhammad, the Arabs, although predominantly unlettered, were masters of the spoken word.  Their poetry and prose were considered outstanding and a model of literary excellence and the miracle of Prophet Muhammad, may the mercy and blessings of God be upon him, was of this nature and much more..The miracle that defined Prophet Solomon was his unique kingdom.  At the time of Jesus, the Israelites were very knowledgeable in the field of medicine.  Consequently, the miracles Jesus performed were of this nature and included returning sight to the blind, healing lepers and raising the dead.

“And you heal those born blind and the lepers by My leave.   And behold!  You bring forth the dead by My leave.” (Quran 5:10)

A karamah is an extraordinary matter or event that is brought about at the hands of a believer who obeys God, refrains from sin and whose piety at a very high level in the sight of God. Unlike a miracle which is meant to be done publically so that people would recognize the truthfulness of the Prophet, a karamah usually only benefits the one to whom it is given.  A karamah could include such things as knowledge, power or something astonishing such as the karamah that was given to Usayd ibn al-Hudayr, one of Prophet Muhammad’s companions. A group of angels in a cloud of light shaded Usayd when he recited Quran[2].  A karamah also occurred for Maryam, the mother of Prophet Jesus.

So her Lord accepted her with goodly acceptance.  He made her grow in a good manner and put her under the care of Zakariya .  Every time he entered her praying place, he found her supplied with sustenance.  He said: “O Maryam (Mary)!  From where have you got this?”  She said, “This is from God.  Verily, God provides sustenance to whom He wills, without limit.” (Quran 3:37)

A miracle results in nothing but good and is given by the Almighty to the Prophets as a sign of their veracity.  This is coupled with a life of exemplary morals and character, and a message of goodness.

Magic can also bring about something extraordinary; however no good can come from magic.  It is performed by evil people and is done by seeking the help of the devils and drawing close to them[3].  Miracles cannot be learnt or undone, whereas magic can be learnt, cancelled out or undone.

Prophet Moses’ encounter with the magicians at Pharaoh’s court explains the difference between magic and miracles.

They said: “O Musa (Moses)! Either you throw (first), or shall we have the (first) throw?” He (Moses) said: “Throw you (first).” When they threw they bewitched the eyes of the people, and struck terror into them, and they displayed a great magic.  And We revealed to Moses, “Throw your stick,” and behold! It swallowed up straight away all the falsehoods which they showed.  Thus truth was confirmed, and all that they did was made of no effect.  So they were defeated there and returned disgraced.  And the magicians fell down prostrate. (Quran 7:115-120)

The magicians understood that Moses was not preforming a trick or illusion as they had done.  They understood deception well and knew that Moses’ actions were a miracle.  Thus they accepted the truth and fell down in prostration to God, knowing full well that it would bring about their death for disobeying Pharaoh.

Miracles can be of two types; those that occur at the request of the people, who want a sign of the veracity of the Prophet who was sent to them and the second type,  occur without being requested.  An example of the first type is when Prophet Saleh’s people requested he bring out from behind the mountain a she camel and her offspring. As well, when the unbelievers in Mecca asked the Prophet Muhammad to show them a miracle, he showed them the splitting of the moon.  One of Prophet Muhammad’s companions mentioned this event saying, “We were with God’s Messenger at Mina, when the moon was split in two parts.  One part was behind the mountain and the other one was on this side of the mountain.  God’s Messenger said to us, “Bear witness to this”[4].

An example of the second type is what happened when the tree trunk cried and longed for Prophet Muhammad.  He, the Prophet used to give his Friday speech while leaning on a palm tree.  One of his followers suggested they make a pulpit for him and they did. So the next Friday when the Prophet stood on the pulpit, the tree trunk began whimpering for him like a child.

Muslims believe that the Quran itself is a miracle.  Prophet Muhammad said, “Every Prophet was given miracles on account of which their people believed; but, I have been given divine revelation which Allah has revealed to me, so I hope that my followers will outnumber the followers of other Prophets on Resurrection Day.”[5] Prophet Muhammad was implying that the Quran itself is the greatest miracle of all time; it is a miraculous book filled with miracles of all kinds.  Its revelation, literary excellence, and its content, including scientific, prophetic and historical information, all contribute to Quran’s status as a miracle.

[1] To learn more about the Jinn, please see: http://www.islamreligion.com/articles/669/viewall/