Description: Islamic answers to the first of some of the “Big Questions” in Life all humans inevitably ask, Who Made Us? 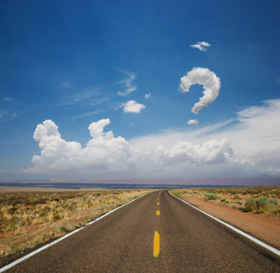 At some point in our lives, everybody asks the big questions: “Who made us,” and “Why are we here?”

So who did make us?  Most of us have been brought up more on science than religion, and to believe in the Big Bang and evolution more than God.  But which makes more sense?  And is there any reason why the theories of science and creationism cannot coexist?

The Big Bang may explain the origin of the universe, but it doesn’t explain the origin of the primordial dust cloud.  This dust cloud (which, according to the theory, drew together, compacted and then exploded) had to come from somewhere.  After all, it contained enough matter to form not just our galaxy, but the billion other galaxies in the known universe.  So where did that come form?  Who, or what, created the primordial dust cloud?

Similarly, evolution may explain the fossil record, but it falls far short of explaining the quintessential essence of human life—the soul.  We all have one.  We feel its presence, we speak of its existence and at times pray for its salvation.  But only the religious can explain where it came from.  The theory of natural selection can explain many of the material aspects of living things, but it fails to explain the human soul.

Furthermore, anyone who studies the complexities of life and the universe cannot help but witness the signature of the Creator.[1]  Whether or not people recognize these signs is another matter—as the old saying goes, denial isn’t just a river in Egypt.  (Get it? Denial, spelled “de Nile” … the river Ni … oh, never mind.) The point is that if we see a painting, we know there is a painter.  If we see a sculpture, we know there’s a sculptor; a pot, a potter.  So when we view creation, shouldn’t we know there’s a Creator?

The concept that the universe exploded and then developed in balanced perfection through random events and natural selection is little different from the proposal that, by dropping bombs into a junkyard, sooner or later one of them will blow everything together into a perfect Mercedes.

If there is one thing we know for certain, it is that without a controlling influence, all systems degenerate into chaos.  The theories of the Big Bang and evolution propose the exact opposite, however—that chaos fostered perfection.  Would it not be more reasonable to conclude that the Big Bang and evolution were controlled events? Controlled, that is, by the Creator?

The Bedouin of Arabia tell the tale of a nomad finding an exquisite palace at an oasis in the middle of an otherwise barren desert.  When he asks how it was built, the owner tells him it was formed by the forces of nature.  The wind shaped the rocks and blew them to the edge of this oasis, and then tumbled them together into the shape of the palace.  Then it blew sand and rain into the cracks to cement them together.  Next, it blew strands of sheep’s wool together into rugs and tapestries, stray wood together into furniture, doors, windowsills and trim, and positioned them in the palace at just the right locations.  Lightning strikes melted sand into sheets of glass and blasted them into the window-frames, and smelted black sand into steel and shaped it into the fence and gate with perfect alignment and symmetry.  The process took billions of years and only happened at this one place on earth—purely through coincidence.

When we finish rolling our eyes, we get the point.  Obviously, the palace was built by design, not by happenstance.  To what (or more to the point, to Whom), then, should we attribute the origin of items of infinitely greater complexity, such as our universe and ourselves?

Another argument to dismiss the concept of Creationism focuses upon what people perceive to be the imperfections of creation.  These are the “How can there be a God if such-and-such happened?”  arguments.  The issue under discussion could be anything from a natural disaster to birth defects, from genocide to grandma’s cancer.  That’s not the point.  The point is that denying God based upon what we perceive to be injustices of life presumes that a divine being would not have designed our lives to be anything other than perfect, and would have established justice on Earth.

Hmm … is there no other option?

We can just as easily propose that God did not design life on Earth to be paradise, but rather a test, the punishment or rewards of which are to be had in the next life, which is where God establishes His ultimate justice.  In support of this concept we can well ask who suffered more injustices in their worldly lives than God’s favorites, which is to say the prophets?  And who do we expect to occupy the highest stations in paradise, if not those who maintain true faith in the face of worldly adversity? So suffering in this worldly life does not necessarily translate into God’s disfavor, and a blissful worldly life does not necessarily translate into beatitude in the hereafter.

I would hope that, by this line of reasoning, we can agree upon the answer to the first “big question.”  Who made us? Can we agree that if we are creation, God is the Creator?

If we can’t agree on this point, there probably isn’t much point in continuing.  However, for those who do agree, let’s move on to “big question” number two—why are we here? What, in other words, is the purpose of life?

Dr.  Brown is the author of The Eighth Scroll, described by North Carolina State Senator Larry Shaw as, “Indiana Jones meets The Da Vinci Code.  The Eighth Scroll is a breath-holding, white-knuckled, can’t-put-down thriller that challenges Western views of humanity, history and religion.  Bar none, the best book in its class!” Dr.  Brown is also the author of three scholastic books of comparative religion, MisGod’ed, God’ed, and Bearing True Witness (Dar-us-Salam).  His books and articles can be found on his websites, www.EighthScroll.com and www.LevelTruth.com, and are available for purchase through www.Amazon.com.

[1] To this end, and leaving all of the author’s religious inclinations aside, I heartily recommend reading A Short History of Nearly Everything, by Bill Bryson.

Next: The Big Questions (part 2 of 3): The Purpose of Life

Salaam to visiters and readers of this Islamic informative site, I personally found this site too much impressive and informative and i hope you did too. I just want mention that nothing in the world is created but for specific and particular purpose. Every single element and created thing in our life has a duty and functuates according to plan which the biggest planner has selected for it or them. best wishes to all.