Description: The last sermon of Prophet Muhammad which he delivered at Hajj, the annual pilgrimage made to Mecca by Muslims all over. 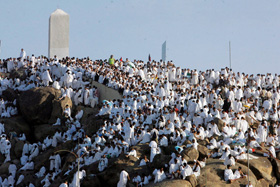 Beloved Prophet Muhammad, may the mercy and blessings of God be upon him, was born in Mecca, Saudi Arabia circa 570 C.E.  He is an example for all of humanity.  He was a remarkable man at all times.  He excelled in all walks of life by being a prophet, ruler, orator, soldier, husband, friend, father, uncle, nephew, and a grandfather.  He was a man of love, patience, courage, wisdom, generosity, intelligence and magnitude who inspired millions of lives throughout the world.

God says in the Quran that he was sent as a mercy for the people of the world.

His Prophetic Mission began at the age of forty, circa 610 C.E., and continued until 632 C.E.  From the path of ignorance, mankind was lead to the straight path and was blessed with the guidance of God.

Shortly before his death, Prophet Muhammad delivered a sermon during the Hajj, which came to be known as his "Final Sermon".  This final sermon was not only a reminder to his followers, but also an important admonition.  The final sermon confirms the end of his Prophetic Mission.

Year 10 A.H.  of the Islamic Calendar is considered to be one of the most significant years for three reasons.  Firstly, this was the year when the Prophet delivered his Last Sermon during his farewell pilgrimage to Mecca.  Secondly, this was the year where a number of deputations came to the Prophet to announce their Islam as well as their tribes.  Thirdly, it was the golden period of Islam when multitudes of people embraced the faith by accepting the message of the Prophet.

Prophet Muhammad’s final sermon was delivered during the Hajj of the year 632 C.E., the ninth day of Dhul Hijjah, the 12th month of the lunar year, at Arafat, the most blessed day of the year.  There were countless Muslims present with the Prophet during his last pilgrimage when he delivered his last Sermon.

After praising, and thanking God, the Prophet, may the mercy and blessings of God be upon him, said "O People, lend me an attentive ear, for I know not whether after this year, I shall ever be amongst you again.  Therefore, listen to what I am saying to you very carefully and take these words to those who could not be present here today.

O People, just as you regard this month, this day, this city as Sacred, so regard the life and property of every Muslim as a sacred trust.  Return the goods entrusted to you to their rightful owners.  Hurt no one so that no one may hurt you.  Remember that you will indeed meet your Lord, and that He will indeed reckon your deeds.  God has forbidden you to take usury (interest), therefore all interest obligation shall henceforth be waived.  Your capital, however, is yours to keep.  You will neither inflict nor suffer any inequity.  God has Judged that there shall be no interest, and that all the interest due to Al-Abbas ibn Abd’el Muttalib shall henceforth be waived...

Beware of Satan, for the safety of your religion.  He has lost all hope that he will ever be able to lead you astray in big things, so beware of following him in small things.

O People, it is true that you have certain rights with regard to your women, but they also have rights over you.  Remember that you have taken them as your wives only under a trust from God and with His permission.  If they abide by your right then to them belongs the right to be fed and clothed in kindness.  Do treat your women well and be kind to them for they are your partners and committed helpers.  And it is your right that they do not make friends with any one of whom you do not approve, as well as never to be unchaste.

O People, listen to me in earnest, worship God, perform your five daily prayers, fast during the month of Ramadan, and offer Zakat.  Perform Hajj if you have the means.

Remember, one day you will appear before God and answer for your deeds.  So beware, do not stray from the path of righteousness after I am gone.

O People, no prophet or apostle will come after me, and no new faith will be born.  Reason well, therefore, O people, and understand words which I convey to you.  I leave behind me two things, the Quran and my example, the Sunnah, and if you follow these you will never go astray.

Thus the beloved Prophet completed his Final Sermon, and upon it, near the summit of Arafat, the revelation came down:

"…This day have I perfected your religion for you, completed My Grace upon you, and have chosen Islam for you as your religion…" (Quran 5:3)

Even today the Last Sermon of Prophet Muhammad is passed to every Muslim in every corner of the world through all possible means of communication.  Muslims are reminded about it in mosques and in lectures.  Indeed the meanings found in this sermon are indeed astounding, touching upon some of the most important rights God has over humanity, and humanity has over each other.  Though the Prophet’s soul has left this world, his words are still living in our hearts.

love you Prophet Muhammad’s allaah he give to you many things like holy quraan i love muslim people.

Congratulations for your efforts for such wonderful website! This will help to clear the misunderstandings of the followers of other faiths. May God help you in pursuing your mission! Adil Ansari

I always have in mind this sermon of our Prophet(pbbuh), if all the muslims on earth could read, learn and remember the message, particulary this part: , I think we muslims from over the world would not suffer from injustice, discrimination connected to our race when we are looking for job or when we are working in muslim companies.

Saalam, the sermon, the last sermon of our Prophet keeps me going every day, it is my pillar of faith. It is straight to the point. I will keep the faith to the last day, It is a true sermon.....

Mashallah, very nice. may Allah guide us to jannah

I wish to thank you in this beautiful translation of The Last Sermon. Clearly many of our Muslim brothers have neither heard this Sermon or have changed the words....The Muslims are the Last with the untouched and perfect Religion (" The First will be the last and the last to become first") Are We the Last generation before the the End??? All Man has not heeded the Beautiful Message and has violated all therein, hence. NOW making this Prophesy to now become true> May Allah have mercy upon our Souls.

I love this last sermon of prophet Muhammad. May peace be upon him.

I am proud to be a Muslim

may Allah's peace and blessings be upon prophet Muhammad

Good its great Mohd. SAW is always b here in our hearts Thank u

Thnx for the work done in Islam

it is great! may Allah bless.

My beloved prophet may Allah blessing an peace be upon him

this is very good history

I have learnt a lot from this article that Allah as it is only through the mercy of Allah that someones proportion of knowledge increases.

Woah. I never knew Islam was so interesting. I'm taking this to thought. One of my fellow muslim students was telling me about this, and I decided to look into it. It's really interesting. I'm taking a consideration of becoming muslim, and after that student told me that, I thought to myself "Wow, they're really religious for 9 year olds." Then I thought, "You know if they can do it I can too." I really enjoy your guys way. Thank you for the respect to Christians as I am now. :)

May Allah guide us on to the straight path aameen

Precise, easy to understand and with valuable advice .

It was very helpful for me to understand the message of our prophet Muhammad (pbuh) and we should convey to other.....this web is very helpful.....

I am impressed with this site. The live chat was very helpful.

I pray to Allah so that I become a true Muslim