Description: A brief and basic outline of the importance of wills. 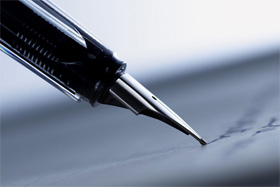 Islam is much more than a religion; it is a way of life.  Islam is guidance from God that directs us through life, and God willing into the next life.  It is for this reason that God also guides us through the process of death and dying.  Death will come to each and every one of us; however there are things we can do to make our passing easier for those we leave behind.  One of those things is to make sure we leave an Islamically sound will.  Islam has placed great emphasis on both the laws of inheritance and making a will, thus there is compelling evidence that every sane adult Muslim should have a will.

“It is the duty of a Muslim who has anything to bequeath not to let two nights pass without writing a will.”[1]

The Islamic will, in Arabic, al wasiyah is a set of instructions that come into effect after a person’s death.  The will is acted upon after the payment of funeral expenses and any outstanding debts.

Islamic law allows a person to bequeath up to 1/3 (one third) of his or her estate to whomever he or she wishes, providing the beneficiaries are not from amongst those who will benefit from the remaining 2/3 (two thirds).  Those who are entitled to the final two thirds of the estate are set out in chapter 4 of the Quran.  When one of Prophet Muhammad’s close companions suffered from a severe illness he asked how much of his vast wealth he should bequeath as a gift because he only had one daughter who qualified to be an inheritor under Islamic law.  The Prophet, may the mercy and blessings of God be upon him, stated one third and said, “It is better to leave them rich rather than poor and destitute”.[3]

A person should take his obligations seriously and think about who could benefit from his or her bequests.  It is an opportunity to perhaps help a poor relative who would not otherwise qualify for a share or even to leave something to a person of another faith, because they cannot inherit from the other two thirds of the estate.

“The followers of two different religions may not inherit from each other.’[4]

Nowadays there are many qualified people that can help one write a will that fulfils all of the Islamic obligations.   In fact the Islamic laws of inheritance have been praised and copied by many individuals and law firms, and academics in the West.  Consider this statement by a leading British university Professor Almaric Rumsey from Kings College in London, England:

“The Muslim law of inheritance comprises beyond question the most refined and elaborate set of rules for the devolution of property that is known to the western world.”

When an estate is divided according to this divine system of law that is outlined in the Quranic text and in the traditions of the Prophet, it would be highly rewarding in the sigh tof God. Besides this, there are a number of compelling reasons why a person should make an Islamically acceptable will.  Firstly it gives a person peace of mind to know that their wishes will be carried out after their death.  It helps resolve or avoid completely the unnecessary disputes that sometimes occur after a person’s death.

A will also makes financial sense.  If a person dies without a will it is called having died intestate and this means the wealth will be distributed according to the laws of the country in which the person lived.  This may or may not be in an Islamic fashion depending upon where in the world the deceased person resided.  Consider the situation, God forbid, where a married couple dies leaving young children, if there is no will, and thus no guardians appointed, the courts have an overwhelming say in where those children are placed.  No will means that such children’s lives, both now and in the hereafter could be in peril, should guardianship be given to someone not Islamically suitable.

An Islamic will gives a person the opportunity to help those less fortunate.  He or she can assure that the charities they supported in their life are not neglected at their time of death.  A will helps not only the beneficiaries, but can help the deceased person too who may wish to set up provision for an ongoing charity, an action that continues to be rewarded even after death.  In accordance with the principle that one third of a person’s estate may be distributed as he or she wishes the prophet Muhammad, may the mercy and blessings of God be upon him, said, “God was being generous to you when He allowed you to give one-third of your wealth (in charity) when you die, to increase your good deeds.”[5]

“When a man dies his actions come to an end except for three: an ongoing charity; knowledge that benefits others or pious offspring who pray for him”.[6]

As with any legal document an Islamic will must be witnessed.  A person making a will should choose his witnesses carefully, remembering that a person who inherits is not able to be a witness.  If he or she does so they will not be able to inherit.  The ideal situation would be to choose two trustworthy Muslim men to witness the signing of the will.  However if this is not possible, then two non-Muslim men may be taken as witnesses.

In most cases it is possible to make an Islamic will that is legally acceptable in almost any part of the world.  Islamic wills have been praised for their thoroughness and the fact that they are almost never considered uncertain.

In the following article we will look more closely at the verses in Quran that set out the laws of inheritance.

Next: Islamic Inheritance and Wills (part 2 of 2): Who are the inheritors?

It's so interesting that the law can be a little different due to some religious circumstances. It would make sense that you would want to honer the view and beliefs of all religions, it would be interesting in these types of situations though. I would guess that when a situation like this occurs, you have to get a really good lawyer in order to sort things out.