Description: A Jewish atheist speaks about the notion that Islam spread by the sword.  Part One: Emperors and Popes. 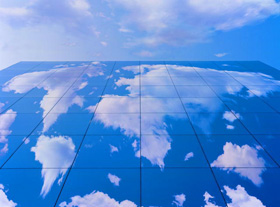 Since the days when Roman Emperors threw Christians to the lions, the relations between the emperors and the heads of the church have undergone many changes.

Constantine the Great, who became Emperor in the year 306 - exactly 1700 years ago - encouraged the practice of Christianity in the empire, which included Palestine.  Centuries later, the church split into an Eastern (Orthodox) and a Western (Catholic) part.  In the West, the Bishop of Rome, who acquired the title of Pope, demanded that the Emperor accept his superiority.

The struggle between the Emperors and the Popes played a central role in European history and divided the peoples.  It knew ups and downs.  Some Emperors dismissed or expelled a Pope, some Popes dismissed or excommunicated an Emperor.  One of the Emperors, Henry IV, “walked to Canossa”, standing for three days barefoot in the snow in front of the Pope’s castle, until the Pope deigned to annul his excommunication.

But there were times when Emperors and Popes lived in peace with each other.  We are witnessing such a period today.  Between the present Pope, Benedict XVI, and the present Emperor, George Bush II, there exists a wonderful harmony.  Last week’s speech by the Pope, which aroused a world-wide storm, went well with Bush’s crusade against “Islamofascism”, in the context of the “Clash of Civilizations”.

In his lecture at a German university, the 265th Pope described what he sees as a huge difference between Christianity and Islam: while Christianity is based on reason, Islam denies it.  While Christians see the logic of God’s actions, Muslims deny that there is any such logic in the actions of Allah.

As a Jewish atheist, I do not intend to enter the fray of this debate.  It is much beyond my humble abilities to understand the logic of the Pope.  But I cannot overlook one passage, which concerns me too, as an Israeli living near the fault-line of this “war of civilizations”.

In order to prove the lack of reason in Islam, the Pope asserts that the prophet Muhammad ordered his followers to spread their religion by the sword.  According to the Pope, that is unreasonable, because faith is born of the soul, not of the body.  How can the sword influence the soul?

To support his case, the Pope quoted - of all people - a Byzantine Emperor, who belonged, of course, to the competing Eastern Church.  At the end of the 14th century, the Emperor Manuel II Palaeologus told of a debate he had - or so he said (its occurrence is in doubt) - with an unnamed Persian Muslim scholar.  In the heat of the argument, the Emperor (according to himself) flung the following words at his adversary:

“Show me just what Mohammed brought that was new, and there you will find things only evil and inhuman, such as his command to spread by the sword the faith he preached”.

WHEN MANUEL II wrote his treatise, he was the head of a dying empire.  He assumed power in 1391, when only a few provinces of the once illustrious empire remained.  These, too, were already under Turkish threat.

At that point in time, the Ottoman Turks had reached the banks of the Danube.  They had conquered Bulgaria and the north of Greece, and had twice defeated relieving armies sent by Europe to save the Eastern Empire.  On May 29, 1453, only a few years after Manuel’s death, his capital, Constantinople (the present Istanbul) fell to the Turks, putting an end to the Empire that had lasted for more than a thousand years.

During his reign, Manuel made the rounds of the capitals of Europe in an attempt to drum up support.  He promised to reunite the church.  There is no doubt that he wrote his religious treatise in order to incite the Christian countries against the Turks and convince them to start a new crusade.  The aim was practical, theology was serving politics.

In this sense, the quote serves exactly the requirements of the present Emperor, George Bush II.  He, too, wants to unite the Christian world against the mainly Muslim “Axis of Evil”.  Moreover, the Turks are again knocking on the doors of Europe, this time peacefully.  It is well known that the Pope supports the forces that object to the entry of Turkey into the European Union.

Is there any truth in Manuel’s argument?[1]

wow that is something,

i would just like to thank the person who took the time to design this website inorder to aknowledge people about islam..and to elaborate to the people of the world that islam is not a complicated relgion that most people view. I would like to make the sugestion to improve this site..which is to add video clips of teachings of islam. which in my opnion would inspire many...