The First Migration (part 1 of 2): Linked by their Love for Prophet Jesus 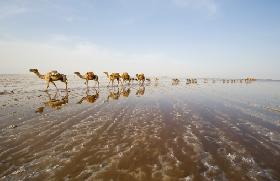 Ethiopia is a country that most of us know very little about.  You might recognize the name but do you know that it is one of the countries in the region known as the Horn of Africa?  It is the second most populous nation in Africa and frequently in the grip of severe famine.  The region that we now call Ethiopia was once, in English, and most commonly outside Ethiopia, known as Abyssinia.  It was also previously known as the Kingdom of Axum, and named by Mani (216–276 CE)[1]  as one of the four great powers of his time along with Persia, Rome, and China.  Axum remained a strong empire and trading power until the rise of Islam in the 7th century.  However, unlike the relations between the Islamic powers and Christian Europe, Axum was on good terms with its Islamic neighbours.  For Muslims, Ethiopia is synonymous with freedom from persecution and fear.

In the early years of Islam the Muslims were persecuted and tortured by the ruling families of Mecca.  There were even instances of people mistreating members of their own families.  Among the new converts to Islam were the poor and weak who were unable to put up with pain and hunger they were forced to endure.  In order to protect them and their new found religion Prophet Muhammad, may the mercy and blessings of God be upon him, sent approx 80 people, including one of his own daughters, to Ethiopia.  This event is known as the first Hijrah (migration).

The King of Ethiopia, sometimes known as the Negus and possibly one of the last rulers of the Axum Empire was known as a just and truthful man.  He was a Christian with deep religious convictions.  Prophet Muhammad believed that his followers would be well looked after if they migrated to a country whose religion was Christianity-a scriptural religion whose Prophet was Jesus son of Mary.  The migrants set off on their hazardous journey carrying with them a letter of introduction for the King.  What follows is a translation of that letter.

I begin with the Name of God, the Most Merciful, Most Gracious, From Muhammad, the Messenger of God to the Negus Al-Asham, king of Abyssinia (Ethiopia).

Peace be upon you, I praise God and I bear witness that Jesus, son of Mary, is the slave of God. He was created by the command of God and Mary the virgin, the good, the pure, conceived Jesus. As God created Adam, He created Jesus.  I call you to God, the Unique without partner, and to His obedience, and to follow me and believe in that which came to me, for I am the Messenger of God.

I send to you my cousin Jafar with a number of Muslims, and when they come, I ask you to entertain and receive them.  Peace be upon all those who follow True Guidance.

When the rulers of Mecca heard about the migration they hastened to send their own emissaries to the Ethiopian court.  It was their fear that if such a ruler welcomed the Muslims it would give credence to the new religion and legitimize their beliefs.  They planned to convince the King to expel the Muslims by giving him gifts, and by spreading gossip and slander about the new religion and the immigrants.  However the King was a wise, noble and just man and was prepared to meet and hear both groups.

The two Meccan delegates reiterated their accusations.   They said, “Your Majesty, you well know that a group of fools have turned renegade and have taken asylum in your country.  They did not embrace your religion, but rather invented their own religion that neither of us knows.  We are people of high rank who are related to their fathers, uncles, and tribes, and ask that you would surrender these wretched renegades to us”.

The King then asked the group of Muslims why they had chosen this new religion rather than adhere to the religion of their forefathers or embrace the established religion of Christianity.  Jafar, the son of Abu Talib and thus Prophet Muhammad’s cousin, rose to speak on behalf of the immigrants and Islam.  He said:

O your Majesty, we used to be a people of ignorance.  We worshipped idols, ate dead animals, committed great sins, severed family relations, and the strong among us abused the weak.  We were like that until God sent from among us a Prophet who was known for his noble descent, honesty, trustworthiness, and decency.  He invited us to worship God alone and abstain from worshipping stones and idols.  He ordered us to speak nothing but the truth and to render back our trusts to those to whom they are due.  Moreover, he ordered us to keep our ties of kinship intact, be good to our neighbours, and abstain from what is forbidden.  He also ordered us not to commit evil, nor to say false statements, nor to eat up the property of orphans, nor to accuse chaste women of wrong-doing without proof or witness.  He has commanded us to worship God alone and not to associate anything with Him and to pray, give Zakat and fast.

Hence, we believed in him and in God's message to him.  We worshipped God alone.  We rejected that which we used to associate with Him as His partners.  We consider unlawful what he has told us is unlawful and lawful what he has told us is lawful.  For this reason alone our people have attacked us, tortured us and forced us from our religion.  They intend to make us revert to the worship of idols instead of praising God.  They want us to consider lawful the evil actions which we used to do in the past.  When they tortured us and hemmed us in, and came between us and our religion, we left for your kingdom, choosing you because we need your protection.  We hope that we would be treated fairly while we are with you, O King!

The King listened to this exchange with patience and attention, when both the Meccans and the Muslims had spoken he turned to Jafar and said, “Do you have with you anything sent down from God to your Prophet?” What happened next caused both the King and his bishops to weep until their beards were soaked with tears, and we will learn about what this was in part 2.

[1] The founder of Manichaeism, a gnostic religion of late antiquity which was once widespread but is now extinct.

Next: The First Migration (part 2 of 2): Come to a word that is just between us and you