What is Eid ul Adha?

Description: Following the example of Prophet Abraham and having complete trust in God. 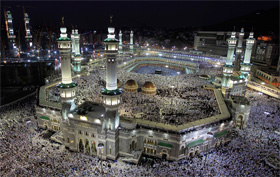 The twelfth month of the Islamic calendar is called Dhul Hijjah.  It is the month that contains one of the greatest pillars of Islam – Hajj or the major pilgrimage.  It also contains one of only two Islamic reoccurring festivals, Eid ul Adha.  These two special occasions, the Hajj and Eid ul Adha, are inextricably linked by one special man, Prophet Ibrahim, known in Jewish and Christian traditions as Prophet Abraham.

Making the pilgrimage is often called following in the footsteps of Ibrahim.  This is due to the fact that the rituals involved in the pilgrimage replicate many of the events in Prophet Ibrahim’s life.  Eid ul Adha commemorates a specific trial in the life of Ibrahim.  He was commanded by God to sacrifice, his son Ishmael.  Eid ul Adha occurs on the 10th day of Dhul Hijjah, the day on which most of the Hajj rites have been preformed and the pilgrims slaughter an animal to honour Prophet Ibrahim’s obedience to God.

“Surely Ibrahim was an example, obedient to God, by nature upright, and he was not of the polytheists.  He was grateful for Our bounties.  We chose him and guided him unto a right path.  We gave him good in this world, and in the next he will most surely be among the righteous.” (Quran 16:120-121)

In a divinely inspired dream, Ibrahim saw himself sacrificing his son Ishmael.  All members of Ibrahim’s family demonstrated complete trust in God, therefore Ibrahim revealed the dream to Ishmael.  He readily agreed that his father must carry out the command of God.  Together they went to the place of sacrifice and offered Ishmael’s life to God.  Ibrahim prepared to sacrifice his beloved son.  At this point the shaytaan (satan) tempted Ibrahim trying to make him disobey God, but Ibrahim resisted and drove the shaytaan away.  Ibrahim looked down at his son for what he believed was the last time but as the blade came close to Ishmael’s neck God stayed his hand and revealed that there was no need for Ibrahim to continue.  His sacrifice had already been fulfilled.

Giving up something big for the sake of God, such as the life of your child, must seem like a huge and unimaginable sacrifice.  Today even going without something small, such as a cup of coffee, to donate the money to charity seems like a large sacrifice.  Try to imagine  how Ibrahim must have felt as he held the blade above his child’s neck.  In the last moment he was relieved of his duty to follow God’s commands.  Having complete trust in God, knowing with certainty that God knows and wants what is best for us is often difficult, but it should not be.

“…And whosoever fears God and keeps his duty to Him, He will make a way for him to get out (from every difficulty).  And He will provide him from (sources) he never could imagine….” (Quran 65:2-3)

God replaced Ishmael with a sheep and it is for this reason that Muslims sacrifice an animal on the celebration of Eid ul Adha; however it is more than a celebration, it is a reminder.  We are reminded of our own submission to the will of God.  Those Muslim’s who are not making the pilgrimage and who can afford it sacrifice an animal in remembrance of Prophet Ibrahim’s test.

“Their meat will not reach Allah, nor will their blood, but what reaches Him is piety from you….” (Quran 22:37)

Distributing the meat from the sacrifice of Eid al-Adha strengthens many of our efforts to please God with our piety.  Usually, a portion is eaten by the immediate family and relatives, a portion is given away to friends and neighbours and a portion is donated to the poor.  The act symbolizes our willingness to give up our bounties to strengthen ties of kinship and friendship and our enthusiasm to give up things that are of benefit to us in order to help those who are in need.  In the sacrifice we recognize that all blessings come from God.

Eid ul Adha commences on the 10th day of Dhul Hijjah.  For those who are not at the pilgrimage, it begins with an extra early morning prayer performed in congregation, called the Eid prayer. It is a time of celebration, a time to visit family and friends and thank God for all the blessings He has bestowed upon us.  It demands contact with relatives, kindness to family and neighbours, and empathy and compassion for the poor. Above all Eid ul Adha reminds us that God is great and that He is the source of all bounties.  Through the good times and the trying times God is the source of all comfort and all peace, and submission to Him brings the greatest benefits of all.

I need this article in chinese language!