Why is the universe the way it is? 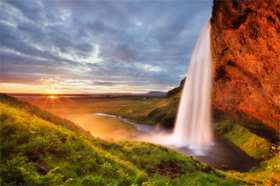 One of the most important questions that almost all thinkers, philosophers and people like you and I have asked is "Why does the universe exist at all?  And why is it the way it is?" In response to this question there are those who say that the universe is uncaused, in other words it is eternal, meaning it has no beginning and no end.  If this is true, there should be an infinite history of past events.  However, the infinite in the real world is not possible as it implies a quantity that is limitless.  Let’s take the following examples into consideration: if there were an infinite number of books in a room and two were taken away, how many would be left?  The response may be "infinity" or for those who are logically inclined "infinity minus two".  In any case, the responses don’t make sense because although two have been taken away from infinity there still remains infinity! Consequently, we’re not able to count the remaining books left in the room.  Therefore the infinite leads to contradictions and simply doesn’t exist in the real world (although it exists in mathematical discourse; however it is based upon certain axioms and conventions).  Therefore, it logically follows that the universe must have a finite history of past events, which indicates that it must have begun to exist at some point in time.

The above may sound too philosophical, but it is also supported by scientific evidence, for instance, Stephen Hawking, in his lecture The Beginning of Time states, "The conclusion of this lecture is that the universe has not existed forever.  Rather, the universe, and time itself, had a beginning in the Big Bang, about 15 billion years ago."[1]  According to contemporary cosmologists, the universe began at time zero with the event commonly called the "Big Bang".  The theory postulates that the universe began as a "singularity", an extremely hot and dense entity that expanded and subsequently cooled, going from something incredibly small and hot to the current size and temperature of our universe.  In light of these facts, it is interesting to note that there is no scientific explanation as to what happened before time zero.  In addition to this, the Big Bang theory can only postulate what happened 1 x 10-34 seconds after the Big Bang but not anytime before it.  What happened before this particular point in time is unknown.

In the context of the above discussion, it can be concluded that generally physicists agree that as a result of the Big Bang, physical time and space were created as were energy and matter.  So two premises can be drawn from all the above: 1. Whatever begins to exist has a cause   2. The universe began to exist - Therefore the universe has a cause.  How do we get to this conclusion?  Well, if everything we know and see that begins to exist has a cause, for example a noise in the room or the pyramids at Giza, then the universe - which also began to exist -must also have a cause.

The Cause for the Universe = God?

Our discussion so far has provided good reasons to believe that there must have been a cause for the universe.  However, this doesn’t tell us much about what the cause is, but if we think deeply about the nature of the cause - also known as conceptual analysis - we can conclude that it must be very powerful as it brought into existence the entire universe, and it must be:

The cause for the universe must be a single cause for several reasons.  An attractive argument to substantiate this claim includes the use of the rational principle called Occam’s razor.  This principle is commonly summarised as "the simplest explanation is the best explanation".  In philosophical terms the principle enjoins that we should not multiply entities beyond necessity.  What this basically means is that we should stick to explanations that do not create more questions than it answers.  In the case of the cause for the universe we have no evidence to claim multiplicity, in other words more than one, and if we did it would create more questions than it answers.

This cause must also be uncaused due to the absurdity of an infinite regress, in other words an indefinite chain of causes.  To illustrate this better, if the cause of the universe had a cause and that cause had a cause ad infinitum, then there wouldn’t be a universe to talk about in the first place.  For example, imagine if a Stock Trader on a trading floor at the Stock Exchange was not able to buy or sell his stocks or bonds before asking permission from the investor, and then this investor had to check with his, and this went on forever, would the Stock Trader ever buy or sell his stocks or bonds?  The answer is no.  In similar light, if we apply this to the universe we would have to posit an uncaused cause due to this rational necessity.

However, some philosophers and scientists claim that "why doesn’t the cause be the universe itself?" and "why can’t the cause stop at the universe?" Well, the problem with these claims is that they would imply the universe created itself, which is absurd because how can anything exist and not exist at the same time?  Finally, it would be irrational to claim that whatever begins to exist causes itself!