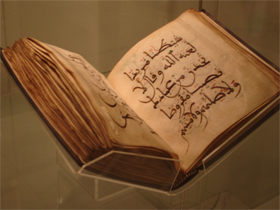 Any publicity is good publicity.  These words have been written and uttered so many times it is impossible to attribute the quote to any one person.  Any publicity is good publicity; meaning that it is better that something receives bad publicity rather than no publicity at all.  In the past decade we have been swamped with bad publicity about Islam, yet conversion statistics indicate that the number of people converting to Islam is growing at a phenomenal rate.  Why is this so?  Because wise people do not believe everything they read and see, they question, they apply critical thinking skills, they acquire knowledge and form their own conclusions.

Finding the correct information does not come easily.  You need to search, to look for your proofs and evidences.  Do you want to know about Islam? Which one of the thousands of books will you turn to first? Everything you ever wanted to know about is out there is cyber space waiting for the click of a mouse or the touch of a screen.  Type Islam into Google search and what do you come up with? 479 million results in just .21 of a second.  Pretty impressive, but where do you start? Now here is a novel answer, how about at the beginning, back where it all began.  Let us begin when God spoke to the angels.

God knows what we do not know and contrary to what many would have us believe His words are not hidden and they are not obscure.  Do you want to know about Islam, do you want to prove to yourself that Islam is the true religion bestowed upon mankind? There is an easy methodology that will help you sort through the hundreds of thousands of different bits of information available.  It begins with the Quran.

The second verse of the second chapter of Quran begins with the words, “This is the book whereof there is no doubt, guidance to those who are righteous...” God knows that every human being is searching for that elusive connection and He says to humankind - this is the book, this is the guidance you have been searching for.  Is this enough? Yes it could be.  Throughout the centuries people have converted to Islam merely from hearing the recitation of Quran, still others have embraced Islam after hearing the soulful call to prayer.  Some people convert to Islam after observing a way of life that combines, tolerance and respect with forgiveness and mercy and then there are those who need proof.

However, asking for proof is not to the seeker’s detriment.  Our religion, the way of life that is Islam, is not based on guess work, it is based on the words of God and the authentic teachings of His messenger Prophet Muhammad.  Islam is the religion of informed knowledge, not blind faith.  When Pharaoh asked Prophet Moses who was the Lord of humankind and all that exists, he, Moses, answered, “The Lord of the heavens and the earth, and all that is between them, if you seek to be convinced with certainty”. (Quran 26: 24 & 25) Seek to be convinced.  Hold a copy of Quran in your hands and read, contemplate and ponder.  Seek your evidence and prepare to be amazed.

The Quran tells us about the power of God and how it operates in the universe.  It explains that God’s knowledge encompasses all things and that He is not only the Creator but also the Sustainer of the universe.

Evidence of the truth of Islam can be found in the scientific evidence that is found throughout the Quran.  Some people like to call them miracles - scientific miracles in the Quran.  There is complete consistency between many of the discoveries of modern science and the words of God written down more than 1400 years ago.  Amazing scientific facts that could not have been known until recently tend to prove that the Quran is the word of God and thus that Islam is the true religion of all human beings.  Logic tells us that 21st century knowledge in the 6th century could not be a coincidence.

Quran speaks eloquently about human embryonic development, and the fact that mountains have deep roots under the surface of the ground.  It describes one of the undisputed facts of cosmology, that the universe was formed out of the remnants of smoke.  Quran even describes the prefrontal area of the cerebrum as the place where lies and sins originate.  Modern science tells us that this is the area responsible for planning, and initiating and the area responsible for choosing either good or sinful behaviour.

Prophet Muhammad, may the mercy and blessings of God be upon him, was unable to read or write yet scientific facts are also found in his authentic sayings and traditions.  While teaching and counselling his followers, Prophet Muhammad mentioned scientific facts including the seven layers of the earth’s crust.  In depth articles backed up by evidence from scientists and doctors can be found on this web site and many others.

In part 2 we will continue to examine the Quran and learn more about its miraculous nature; we will look at more evidence for the existence of God and discuss how logical proofs can only lead to one conclusion.