Bilal Ibn Rabah (part 1 of 2): From Slavery to Freedom

Description: In the face of torture one man clings to his new religion.

"I was present....  when Mohammad, the Messenger of God, walked the earth.  I heard what he said and saw what he did…"  So begins a book based on the life of one of Prophet Muhammad’s closest companions – Bilal Ibn Rabah. 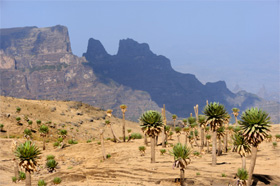 Bilal was a black slave, almost certainly the son of slaves, and is believed to have been from Abyssinia (now known as Ethiopia).  Being born into servitude, he probably never expected life to offer him more than hard work, pain and drudgery.  However Bilal walked the earth at a very momentous time.  He was a slave in the city of Mecca when an unlettered man began to call the people to worship One God.  This man was Muhammad, the Messenger of God, may the mercy and blessings of God be upon him, and his message was for all of humanity.

When a person is poor or destitute, hungry or afraid, or beaten bruised and broken, a message infused with the concepts of mercy, forgiveness and justice is very appealing.  The down trodden were just the sort of people who flocked to the side of Prophet Muhammad, eager to take comfort in his words, and deeds.  Bilal, possibly the first African to convert to Islam accepted the message whole heartedly.  Life for Bilal was about to get a great deal worse.  Like a drowning man holding the rope that will drag him to safety, Bilal clung to the words of the One God and they were essential in saving his life.

Bilal heard the message of Muhammad, that God is One, the Almighty, All Merciful but he also heard the words of his owner.  Umayya ibn Khalaf, a wealthy Meccan, was worried that his livelihood based around idol worship would be disrupted by Muhammad’s message.  He spoke to others also concerned about the changes to the political and religious landscape of Mecca saying, "Muhammad was never a liar, magician, or mad, but we have to describe him this way until we turn away from him those who rush to his religion."

According to biographer Ibn Ishaq and others[1], Bilal suffered terribly for his immediate acceptance of Muhammad’s message.  It is said that he was beaten mercilessly, dragged around the streets and hills of Mecca by his neck, and subjected to long periods without food or water.  His owner Umayya ibn Khalaf reportedly, "would bring him out at the hottest part of the day and throw him on his back in the open valley and have a great rock put on his chest; then he would say to him, ‘You will stay here till you die or deny Muhammad and worship al-Lat and al-’Uzza"[2].  Bilal would not renounce Islam, and amidst his suffering he uttered only one word – Ahad (meaning One God) [3]

News of the slave who cried out ‘God is One!’ even in the midst of torture soon reached Prophet Muhammad and his companions.  Abu Bakr, Prophet Muhammad’s closest friend and a wealthy trader of equal status to Umayya was sent to investigate.   He came upon the open field where Bilal was being tortured for amusement. Abu Bakr did not lose his temper, for that was not his way, but he remonstrated with the torturers.  He said to Umayya, "Have you no fear of God that you treat this poor man like this?"  He replied saying: "You are the one who corrupted him, so you save him from his plight!" Abu Bakr replied: "Then sell him to me, name your price." Umayya, was a businessman and could not give up making a profit, so he sold Bilal for a good price. To humiliate Bilal, he added: "I would have sold him to you even if you had offered me only an ounce of gold."  Abu Bakr answered: "I would have bought him even if you had asked for one hundred ounces."

Bilal was cared for and nursed back to health.  Upon his recovery he was taken to Prophet Muhammad and he stood by his side giving support and calling others to Islam. At the time of Prophet Muhammad slavery was a worldwide, entrenched institution.  The laws of Islam sought to emancipate slaves; God mentions in the Quran the expiation for many sins is to free a slave, and it is regarded as an act of piety.

Bilal loved to be in the company of Prophet Muhammad and became exceptionally close to him.  Various traditions mention Bilal having the honour of waking the Prophet each morning and spending as much time as possible in his company.  The story of Bilal is often used to demonstrate the importance of pluralism and racial equality in Islam.  More importantly it is an example of piety being the measure of a man, rather than race, ethnicity or social status.

In part 2 we will learn more about Bilal, the Muslim migration to Medina and the great honour bestowed on Bilal, the freed slave of Abyssinia.

[2] Idols worshipped by the people of Mecca.

[3] The Arabic word Ahad is used rather than the English one or the Arabic wahad because of its meaning – not just one the numeral but One God.