Description: A Jewish scholar recognises events predicted in the Torah and accepts Islam. 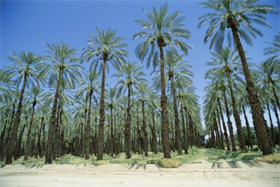 In 622CE Prophet Muhammad, may the mercy and blessings of God be upon him, and most of the Muslim community migrated from Mecca to Medina.  At that time Medina was known as Yathrib.  It was not so much a city as a series of fortresses and strongholds where various political factions were united by tenuous alliances.  Medina was ruled by two large Arab tribes, the Khazraj and Aws.

A group of influential leaders invited Prophet Muhammad and his followers to Medina. When Prophet Muhammad reached there several of the Jewish clans were troubled, to say the least.  In these first troublesome years the Prophet established the first Islamic state.  During this time some individual Median Jews accepted Islam, the most famous of which is Abdullah Ibn Salam, a well respected and liked religious scholar and rabbi.

Husain Ibn Salam, as he was then known was a religious man, dedicated to study and contemplation.  He also worked on his small orchard/date plantation but organised his time in such a way that his religious study and devotion always took precedence.  He studied the Torah in great detail, although historical records seem to indicate that the study of the Talmud played a very small part in Judaism in the Arabian Peninsula at the time.  Never the less because of his study Husain was aware of the verses in the Torah mentioning a prophet who would complete the message of all previous prophets.  When he heard the reports of a man in Mecca claiming to be such a man, the messenger of God, he took an immediate interest.

In authentic traditions and in the translation of Husain /Abdullah’s own words we find the following passage.  “When I heard of the appearance of the Messenger of God, I began to make enquiries about his name, his genealogy, his characteristics, his time and place and I began to compare this information with what is contained in our books.  From these enquiries, I became convinced about the authenticity of his prophet-hood and I affirmed the truth of his mission.”

For some time, possibly years, Husain Ibn Salam continued to study his scripture and listen to news of Prophet Muhammad.  Then, in 622 CE,  Messengers rushed into the streets of Medina announcing that the Messenger of God was in Quba, only a short distance away.  The stories relate that Husain was in his date plantation, high up in one of the date palms.  When he heard the news he shouted Allahu Akbar – God is great.  His elderly aunt could hear the excitement in his voice  and  remonstrated with him declaring that he could not be more excited if Moses himself was about to enter the town.

Those words were correct for Husain Ibn Abdullah was of the opinion that Muhammad was the brother of Moses, since they were both Prophets.  Without hesitation Husain joined the crowds thronging into the streets, waiting to meet and greet Prophet Muhammad.  Husain relates that he pushed in amongst the crowd longing to be close to the man he had been waiting for.  The first words Husain heard from Prophet Muhammad’s lips were, ‘O people! Spread peace…Share food…Pray during the night while others sleep… and you will enter Paradise in peace…’[1]

Husain looked into the eyes of the Prophet of God, he scrutinised his face and said with complete certainty, “There is no god worthy of worship but Allah and Muhammad is the Messenger of Allah”.  Upon hearing the words come so spontaneously from the man’s lips the Prophet turned to him and asked in a gentle yet strong voice, “What is your name?”  Husain replied, “Husain Ibn Salam”.  “From this day forward”, Prophet Muhammad said, “you will be known as Abdullah Ibn Salam”.

Abdullah Ibn Salam (part 2 of 2): A man from the people of Paradise

Description: Abdullah Ibn Salam’s knowledge of the Torah led him to the religion of Islam. 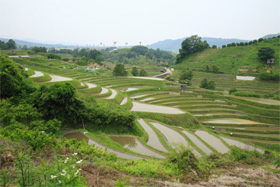 In the new city of Medina relations between all political affiliations were tense.  The fabric of society was held together by tribal and political alliances and any change threatened to plunge the area into chaos.  The advent of Islam was one such change.  Prophet Muhammad and his followers were invited to relocate to  Yathrib (now known as Medina) with Prophet Muhammad, may the mercy and blessings of God be upon him, assuming leadership of the immediate area.  The Prophet’s  diplomatic skills  and trustworthiness were well known and admired, however some groups, particularly some Jewish groups did not want any change to their tenuous yet profitable alliances.  Such was the Median political landscape; into this mix came Abdullah Ibn Salam.

In part 1 we learned that Husain Ibn Salam was a Jewish scholar, well respected and trusted by his community.  Because of his study Ibn Salam was convinced that Prophet Muhammad was the prophet predicted in the Torah.  When Prophet Muhammad arrived in Medina ibn Salam rushed into his presence and declared his belief in the teachings of Islam and Muhammad’s Prophethood.   Prophet Muhammad changed Ibn Salam’s name from Husain to Abdullah (the slave of God).

Abdullah Ibn Salam was excited to be in the company of Prophet Muhammad.  He spent as much time as possible with him asking questions, talking about both Islam and Judaism and enjoying the company of the man the Torah had predicted so very long ago.  Abdullah Ibn Salam wanted very much for his people to accept Islam as their religion and Muhammad as their Prophet however he was afraid of how they would react if he informed them of his conversion.  Ibn Salam was known amongst the Jews to be a righteous, well educated man and he discussed his problem with Prophet Muhammad; they agreed upon a plan.

One day, when he was in the company of the respected Jewish elders of Medina, Prophet Muhammad asked them their thoughts and opinions about the character of Ibn Salam.  They replied that, "he is the best of us, the son of the best of us, the most knowledgeable and the son of the most knowledgeable”[1]  Prophet Muhammad continued to question them and asked what their opinion would be if Ibn Salam came to learn about and accept Islam.  The Jews reacted with horror.  Never would he do such a thing they cried!  At that moment Ibn Salam entered the room and declared his conversion to Islam.  The Jews reacted angrily, but Ibn Salam knew that the Jewish revealed books had predicted the coming of Prophet Muhammad.

Although alliances were tenuous all political factions in Medina, at least in the beginning, accepted the leadership of Prophet Muhammad.  They even referred matters of  religious law to him.  On one occasion when a group of Jews requested that Prophet Muhammad pass sentence on  an adulterous couple, he immediately asked what the  ruling according to the Torah was.  They replied, ‘’We make their wrong action known and flog them”.

Ibn Salam knew that the correct punishment was stoning and he insisted that the Torah itself be used to confirm their words.  A copy of the Torah was bought before them thus we discover that an incorrect answer was given to deliberately mislead the Prophet.  Abdullah Ibn Salam pointed to the correct passages that were deftly hidden under the hand of the Jewish man holding the parchment.  The punishment in the Torah was stoning, ibn Salam read the correct passages and Prophet Muhammad ordered that this rule be upheld.

Abdullah Ibn Salam loved being in the company of Prophet Muhammad.  He spent as much time with him as possible and delighted in their talks and companionship.  He was devoted to the Quran and was often in the mosque praying, learning and teaching.  He was known amongst the Muslims as an effective and dedicated teacher and his study circles were popular and well attended.  Abdullah Ibn Salam was also known amongst the Muslims of Medina as a man destined for Paradise.  Among the authentic traditions of Prophet Muhammad is a story explaining exactly why Abdullah Ibn Salam was considered to be among the people of Paradise.

Qays ibn `Abbad said, “I was in the mosque when a man whose face showed signs of humbleness came to pray.  The people said, `This is a man from among the people of Paradise.  When he left, I followed him and spoke with him.  I said to him, `When you entered the mosque the people said you were from the people of Paradise.’ He said, `All praise is due to God! No one should say what he has no knowledge of.  I will tell you why they said that.  I had a dream during the time of the Messenger of God and I narrated it to him.  I saw that I was in a green garden, ‘ and he described the garden’s plants and spaciousness, `and there was an iron pole in the middle of the garden affixed in the earth and its tip reached the sky.  On its tip, there was a handle, and I was told to ascend the pole.  I said, `I cannot.’ Then a helper came and raised my robe from behind and said to me, `Ascend.’ I ascended until I grasped the handle and he said to me, `Hold on to the handle.’ I awoke from that dream with the handle in my hand.  I went to the Messenger of God and told him about the dream and he said, “The garden represents Islam, the pole, it represents the pillar of Islam, and the handle represents the most trustworthy handhold.  You shall remain Muslim until you die.”[2]