Hajj - The Journey of a Lifetime (part 2 of 2): The Rites of Abraham

Description: One fifth of humankind shares a single aspiration: to complete, at least once in a lifetime, the spiritual journey called the Hajj.  Part Two: The procession from Arafah until the last of the Rites, and a Hajj accepted by the Almighty.

Just after sunset, the mass of pilgrims proceeds to Muzdalifah, an open plain about halfway between Arafat and Mina.  There they first pray and then collect a fixed number of chickpea-sized pebbles to use on the following days. 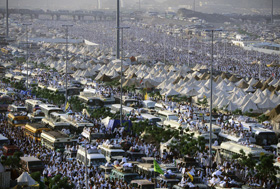 Before daybreak on the third day, pilgrims move en masse from Muzdalifah to Mina.  There they cast at white pillars the pebbles they have previously collected, a practice associated with the Prophet Abraham.  As pilgrims throw seven pebbles at each of these pillars, they remember the story of Satan’s attempt to persuade Abraham to disregard God’s command to sacrifice his son.

Throwing the pebbles is symbolic of humans’ attempt to cast away evil and vice, not once but seven times - the number seven symbolizing infinity.

Following the casting of the pebbles, most pilgrims sacrifice a goat, sheep or some other animal.  They give the meat to the poor after, in some cases, keeping a small portion for themselves.

This rite is associated with Abraham’s readiness to sacrifice his son in accordance with God’s wish.  It symbolizes the Muslim’s willingness to part with what is precious to him, and reminds us of the spirit of Islam, in which submission to God’s will plays a leading role.  This act also reminds the pilgrim to share worldly goods with those who are less fortunate, and serves as an offer of thanksgiving to God.

As the pilgrims have, at this stage, finished a major part of the hajj, they are now allowed to shed their ihram and put on everyday clothes.  On this day Muslims around the world share the happiness the pilgrims feel and join them by performing identical, individual sacrifices in a worldwide celebration of ‘Eid al-Adha, “the Festival of Sacrifice.”  Men either shave their heads or clip their hair, and women cut off a symbolic lock, to mark their partial deconsecration.  This is done as a symbol of humility.  All proscriptions, save the one of conjugal relations, are now lifted. 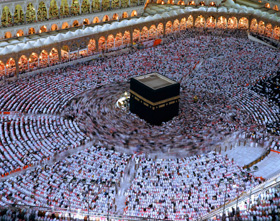 Still so journing in Mina, pilgrims visit Mecca to perform another essential rite of the hajj: the tawaf, the seven-fold circling of the Kaaba, with a prayer recited during each circuit.  Their circumambulation of the Kaaba, the symbol of God’s oneness, implies that all human activity must have God at its center.  It also symbolizes the unity of God and man.

Thomas Abercrombie, a convert to Islam and a writer and photographer for National Geographic Magazine, performed the hajj in the 1970’s and described the sense of unity and harmony pilgrims feel during the circling:

“Seven times we circled the shrine repeating the ritual devotions in Arabic: ‘Lord God, from such a distant land I have come unto Thee....  Grant me shelter under Thy throne.’  Caught up in the whirling scene, lifted by the poetry of the prayers, we orbited God’s house in accord with the atoms, in harmony with the planets.”

While making their circuits pilgrims may kiss or touch the Black Stone.  This oval stone, first mounted in a silver frame late in the seventh century, has a special place in the hearts of Muslims as, according to some hadeeth, it is the sole remnant of the original structure built by Abraham and Ishmael.  But perhaps the single most important reason for kissing the stone is that the Prophet did so.

No devotional significance whatsoever is attached to the stone, for it is not, nor has ever been, an object of worship.  The second caliph, Umar ibn al-Khattab, made this crystal clear when, on kissing the stone himself in emulation of the Prophet, he proclaimed:

“I know that you are but a stone, incapable of doing good or harm.  Had I not seen the Messenger of God kiss you - may God’s blessing and peace be upon him - I would not kiss you.”

After completing the tawaf, pilgrims pray, preferably at the Station of Abraham, the site where Abraham stood while he built the Kaaba.  Then they drink of the water of Zamzam.

Another, and sometimes final, rite is the sa’y, or “exerting.”  This is a reenactment of a memorable episode in the life of Hagar, who was taken into what the Quran calls the “uncultivable valley” of Mecca, with her infant son Ishmael, to settle there.

The sa’y commemorates Hagar’s frantic search for water to quench Ishmael’s thirst.  She ran back and forth seven times between two rocky hillocks, al-Safa and al-Marwah, until she found the sacred water known as Zamzam.  This water, which sprang forth miraculously under Ishmael’s tiny feet, is springs from the same well from which pilgrims drink today

These rites performed, the pilgrims are completely deconsecrated: They may resume all normal activities.  They now return to Mina, where they stay up to the 12th or 13th day of Dhu al-Hijjah.  There they throw their remaining pebbles at each of the pillars in the manner practiced or approved by the Prophet.  They then take leave of the friends they have made during the Hajj.  Before leaving Mecca, however, pilgrims make a final tawaf round the Kaaba to bid farewell to the Holy City.

Usually pilgrims either precede or follow the hajj, “the greater pilgrimage,” with the umrah, “the lesser pilgrimage,” which is sanctioned by the Quran and was performed by the Prophet.  The umrah, unlike the hajj, takes place only in Mecca itself and can be performed at any time of the year.  The ihram, talbiyah and the restrictions required by the state of consecration are equally essential in the umrah, which also shares three other rituals with the hajj: the tawaf, sa’y and shaving or clipping the hair.  The observance of the umrah by pilgrims and visitors symbolizes veneration for the unique sanctity of Mecca. 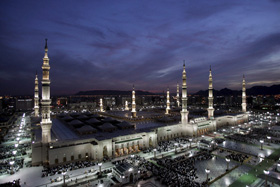 Before or after going to Mecca, pilgrims also avail themselves of the opportunity provided by the hajj or the umrah to visit the Prophet’s Mosque in Medina, the second holiest city in Islam.  Here, the Prophet lies buried in a simple grave.  The visit to Medina is not obligatory, as it is not part of the hajj or umrah, but the city - which welcomed Muhammad when he migrated there from Mecca - is rich in moving memories and historical sites that are evocative of him as a Prophet and statesman.

In this city, loved by Muslims for centuries, people still feel the effect of the Prophet’s life.  Muhammad Asad, an Austrian Jew who converted to Islam in 1926 and made five pilgrimages between 1927 and 1932, comments on this aspect of the city:

“Even after thirteen centuries [the Prophet’s] spiritual presence is almost as alive here as it was then.  It was only because of him that the scattered group of villages once called Yathrib became a city and has been loved by all Muslims down to this day as no city anywhere else in the world has ever been loved.  It has not even a name of its own: for more than thirteen hundred years it has been called Madinat an-Nabi, ‘the City of the Prophet.’  For more than thirteen hundred years, so much love has converged here that all shapes and movements have acquired a kind of family resemblance, and all differences of appearance find a tonal transition into a common harmony.”

As pilgrims of diverse races and tongues return to their homes, they carry with them cherished memories of Abraham, Ishmael, Hagar, and Muhammad.  They will always remember that universal concourse, where poor and rich, black and white, young and old, met on equal footing.

They return with a sense of awe and serenity: awe for their experience at Arafat, when they felt closest to God as they stood on the site where the Prophet delivered his sermon during his first and last pilgrimage; serenity for having shed their sins on that plain, and being thus relieved of such a heavy burden.  They also return with a better understanding of the conditions of their brothers in Islam.  Thus is born a spirit of caring for others and an understanding of their own rich heritage that will last throughout their lives.

The pilgrims go back radiant with hope and joy, for they have fulfilled God’s ancient injunction to humankind to undertake the pilgrimage.  Above all, they return with a prayer on their lips: May it please God, they pray, to find their hajj acceptable, and may what the Prophet said be true of their own individual journey:

“There is no reward for a pious pilgrimage but Paradise.” (Al-Tirmidhi)

Previous: Hajj - The Journey of a Lifetime (part 1 of 2): The Day of Arafah and its Preparation