Hajj - The Journey of a Lifetime (part 1 of 2): The Day of Arafah and its Preparation

Description: One fifth of humankind shares a single aspiration: to complete, at least once in a lifetime, the spiritual journey called the Hajj.  Part One: An Introduction to the Hajj and some of the rites leading up to the actual day of Hajj. 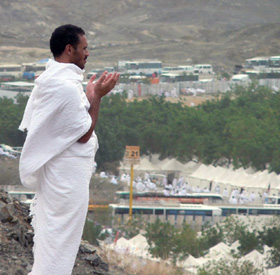 The hajj, or pilgrimage to Mecca, a central duty of Islam whose origins date back to the Prophet Abraham, brings together Muslims of all races and tongues for one of life’s most moving spiritual experiences.

For 14 centuries, countless millions of Muslims, men and women from the four corners of the earth, have made the pilgrimage to Mecca, the birthplace of Islam.  In carrying out this obligation, they fulfill one of the five “pillars” of Islam, or central religious duties of the believer.

Muslims trace the recorded origins of the divinely prescribed pilgrimage to the Prophet Abraham.  According to the Quran, it was Abraham who, together with Ishmael built the Kabah, “the House of God”, the direction toward which Muslims turn in their worship five times each day.  It was Abraham, too who established the rituals of the hajj, which recall events or practices in his life and that of Hagar and their son Ishmael.

In the chapter entitled “The Pilgrimage”, the Quran speaks of the divine command to perform the hajj and prophesies the permanence of this institution:

“And when We assigned for Abraham the place of the House, saying ‘Do not associate Anything with Me, and purify My House for those who go around it and for those who stand and bow and prostrate themselves in worship.  And proclaim the Pilgrimage among humankind: They will come to you on foot and on every camel made lean By traveling deep, distant ravines.’” (Quran 22:26-27)

By the time the Prophet Muhammad, may the mercy and blessings of God be upon him, received the divine call, however, pagan practices had come to muddy some of the original observances of the hajj.  The Prophet, as ordained by God, continued the Abrahamic hajj after restoring its rituals to their original purity.

Furthermore, Muhammad himself instructed the believers in the rituals of the hajj.  He did this in two ways: by his own practice, or by approving the practices of his Companions.  This added some complexity to the rituals, but also provided increased flexibility in carrying them out, much to the benefit of pilgrims ever since.  It is lawful, for instance, to have some variation in the order in which the several rites are carried out, because the Prophet himself is recorded as having approved such actions.  Thus, the rites of the hajj are elaborate, numerous and varied; aspects of some of them are highlighted below.

The hajj to Mecca is a once-in-a-lifetime obligation upon male and female adults whose health and means permit it, or, in the words of the Quran, upon “those who can make their way there.”  It is not an obligation on children, though some children do accompany their parents on this journey.

Before setting out, a pilgrim should redress all wrongs, pay all debts, plan to have enough funds for his own journey and for the maintenance of his family while he is away, and prepare himself for good conduct throughout the hajj.

When pilgrims undertake the hajj journey, they follow in the footsteps of millions before them.  Nowadays hundreds of thousands of believers from over 70 nations arrive in the Mecca by road, sea and air every year, completing a journey now much shorter and in some ways less arduous than it often was in the past.

Till the 19th century, traveling the long distance to Mecca usually meant being part of a caravan.  There were three main caravans: the Egyptian one, which formed in Cairo; the Iraqi one, which set out from Baghdad; and the Syrian, which, after 1453, started at Istanbul, gathered pilgrims along the way, and proceeded to Mecca from Damascus.

As the hajj journey took months if all went well, pilgrims carried with them the provisions they needed to sustain them on their trip.  The caravans were elaborately supplied with amenities and security if the persons traveling were rich, but the poor often ran out of provisions and had to interrupt their journey in order to work, save up their earnings, and then go on their way.  This resulted in long journeys which, in some cases, spanned ten years or more.  Travel in earlier days was filled with adventure.  The roads were often unsafe due to bandit raids.  The terrain the pilgrims passed through was also dangerous, and natural hazards and diseases often claimed many lives along the way.  Thus, the successful return of pilgrims to their families was the occasion of joyous celebration and thanksgiving for their safe arrival.

Lured by the mystique of Mecca and Medina, many Westerners have visited these two holy cities, on which the pilgrims converge, since the 15th century.  Some of them disguised themselves as Muslims; others, who had genuinely converted, came to fulfill their duty.  But all seem to have been moved by their experience, and many recorded their impressions of the journey and the rituals of the hajj in fascinating accounts.  Many hajj travelogues exist, written in languages as diverse as the pilgrims themselves.

The pilgrimage takes place each year between the 8th and the 13th days of Dhul-Hijjah, the 12th month of the Muslim lunar calendar.  Its first rite is the donning of the ihram. 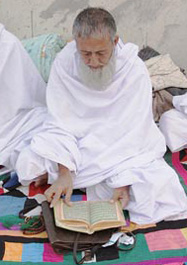 The ihram, worn by men, is a white seamless garment made up of two pieces of cloth or toweling; one covers the body from waist down past the knees, and the other is thrown over the shoulder.  This garb was worn by both Abraham and Muhammad.  Women dress as they usually do.  Men’s heads must be uncovered; both men and women may use an umbrella.

The ihram is a symbol of purity and of the renunciation of evil and mundane matters.  It also indicates the equality of all people in the eyes of God.  When the pilgrim wears his white apparel, he or she enters into a state of purity that prohibits quarreling, committing violence to man or animal and having conjugal relations.  Once he puts on his hajj clothes the pilgrim cannot shave, cut his nails or wear any jewelry, and he will keep his unsown garment on till he completes the pilgrimage.

A pilgrim who is already in Mecca starts his hajj from the moment he puts on the ihram.  Some pilgrims coming from a distance may have entered Mecca earlier with their ihram on and may still be wearing it.  The donning of the ihram is accompanied by the primary invocation of the hajj, the talbiyah:

The thunderous, melodious chants of the talbiyah ring out not only in Mecca but also at other nearby sacred locations connected with the hajj.

On the first day of the hajj, pilgrims sweep out of Mecca toward Mina, a small uninhabited village east of the city.  As their throngs spread through Mina, the pilgrims generally spend their time meditating and praying, as the Prophet did on his pilgrimage. 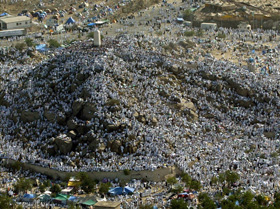 During the second day, the 9th of Dhu al-Hijjah, pilgrims leave Mina for the plain of Arafat where they rest.  This is the central rite of the hajj.  As they congregate there, the pilgrims’ stance and gathering reminds them of the Day of Judgment.  Some of them gather at the Mount of Mercy, where the Prophet delivered his unforgettable Farewell Sermon, enunciating far-reaching religious, economic, social and political reforms.  These are emotionally charged hours, which the pilgrims spend in worship and supplication.  Many shed tears as they ask God to forgive them.  On this sacred spot, they reach the culmination of their religious lives as they feel the presence and closeness of a merciful God.

The first Englishwoman to perform the hajj, Lady Evelyn Cobbold, described in 1934 the feelings pilgrims experience at Arafat.

“It would require a master pen to describe the scene, poignant in its intensity, of that great concourse of humanity of which I was one small unit, completely lost to their surroundings in a fervor of religious enthusiasm.  Many of the pilgrims had tears streaming down their cheeks; others raised their faces to the starlit sky that had witnessed this drama so often in the past centuries.  The shining eyes, the passionate appeals, the pitiful hands outstretched in prayer moved me in a way that nothing had ever done before, and I felt caught up in a strong wave of spiritual exaltation.  I was one with the rest of the pilgrims in a sublime act of complete surrender to the Supreme Will which is Islam.”

She goes on to describe the closeness pilgrims feel to the Prophet while standing in Arafat:

“...as I stand beside the granite pillar, I feel I am on Sacred ground.  I see with my mind’s eye the Prophet delivering that last address, over thirteen hundred years ago, to the weeping multitudes.  I visualize the many preachers who have spoken to countless millions who have assembled on the vast plain below; for this is the culminating scene of the Great Pilgrimage.”

The Prophet is reported to have asked God to pardon the sins of pilgrims who gathered at Arafat, and was granted his wish.  Thus, the hopeful pilgrims prepare to leave this plain joyfully, feeling reborn without sin and intending to turn over a new leaf.

Next: Hajj - The Journey of a Lifetime (part 2 of 2): The Rites of Abraham

I like this articles very much. Hopefully, someday I also can write down my experience like that, but the more important is to fulfill my obligatory of the last pillars in Islam with my wife. Insha Allah(If Allah Wishes)