Description: The rise and history of a religion incorrectly associated with Islam. 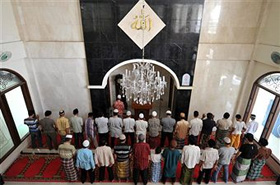 Many of us have heard the term ‘Nation of Islam’, and may think that it is merely a different way of expressing the phrase Ummah of Muhammad, meaning those who follow the teachings of Muhammad, may the mercy and blessings of God be upon him.  Still others may associate the words Nation of Islam with African Americans.  Perhaps it seems obvious that ‘Nation of Islam’ is referring to African American Muslims, however a little bit of research proves this to be wrong.  Although this group does on occasion align itself with the religion of Islam at times, the belief system is vastly different and in fact goes completely against the tenants of Islam.  The first pillar of Islam, the foundational belief, is, there is no god but Allah and Muhammad is His final messenger.

In the late 1920’s a man appeared on the streets of Detroit, USA selling African silks and artefacts door to door.  The name he was using at the time was Wallace Fard Muhammad.  His origins, ancestry and ethnicity were, and still are, open to debate.  However one thing is definitely true, his charismatic personality allowed him to convince many members of the African American community to join his newly founded religion, ‘Nation of Islam’.  In 1930 he opened  the first NOI temple.  Wallace Fard taught “freedom, justice, and equality to the members of the lost tribe of Shabazz in the wilderness of North America”.  He taught the poor African Americans that they were somebody “with a past, a future, a history and a destiny’.  Within three years he had converted nearly 8000 followers.[1]

One of W Fard Muhammad’s  most devoted followers was Elijah Poole, an unemployed auto mechanic from Georgia.  He changed his name to Elijah Muhammad and soon became Fard’s Cheif Minister.  In the summer of 1934, Fard suddenly disappeared as mysteriously as he had arrived.  Elijah Muhammad was named the new leader and assumed the title of "Messenger of Allah." Bearing in mind that such a title is a great blasphemy and coupled with the following statement from Elijah Muhammad’s book, Message to the Blackman, we can see that from the very beginning NOI has no connection to the religion of Islam.  Not even to the extent of being called either an off shoot or a cult.

“Allah (God) came to us from the Holy City Mecca, Arabia, in 1930.  He used the name Wallace D. Fard, often signing it W. D. Fard.  In the third year (1933), He signed His name W. F. Muhammad, which stands for Wallace Fard Muhammad.  He came alone.  He began teaching us the knowledge of ourselves, of God and the devil, of the measurement of the earth, of other planets, and of the civilizations of some of the planets other than earth.”[2]

Islam says categorically and without reservation that there is no god but Allah.  He has no partners, associates, sons or daughters.  God does not take on human form and to even suggest such a possibility is a major sin and deviation from the teachings of Islam.

The single most important convert to NOI is Malcolm Little, who converted to Nation of Islam in a  Concord, Massachusetts prison in 1947.  Malcolm Little is now better known to the world as Malcolm X.  While Malcolm was in prison Elijah Muhammad was preaching that white society actively worked to keep African-Americans from empowering themselves and achieving political, economic and social success.  NOI also called for a state of their own, uninhabited by white people.  When he was paroled in 1952, Malcolm was a devoted follower with the new surname X.  (Little  was a slave name and  Malcolm chose "X" to signify his lost tribal name.)

Malcolm was both intelligent and articulate, and soon became the national spokesperson for NOI.  He established new mosques (temples) and utilised all fields of media available at the time to spread the NOI message across the United States.  He is credited with increasing membership from 500 in 1952 to more than 30 thousand by 1963.  During this time Malcolm preached that black people were genetically superior to white people but were dominated by a system of white supremacy.

As the years passed, through the grace of God, Malcolm X moved closer to the real Islam.  He was well read and travelled extensively.  In early 1964 Malcolm publicly declared his separation from NOI, stating irreconcilable differences and growing tensions between himself and Elijah Muhammad.  In the same year he participated in the annual pilgrimage to Mecca.  Malcolm was overwhelmed by the universal brotherhood he experienced on Hajj and returned to the US, a Sunni Muslim determined to preach his message to all races.  Malcolm X was assassinated - gunned down at the Audoban Ballroom in Harlem, New York, on February 21, 1965.

Elijah Muhammad continued to lead NOI until his death from congestive heart failure on February 25, 1975.  His son, Warith Deen Muhammad became the new leader of the NOI.  Because of his knowledge of Islam he began to make changes, the most dramatic being the merger of his followers into traditional or Sunni Islam.

“I have been trying to bring what used to be called the Nation of Islam to what I call a natural and normal Islamic community.  The idea we have had of a community is not Islamic and came from the days of Black Nationalism.”[4]

Many of Elijah Muhammad's former followers were pleased with Wallace’s new direction, however many were not.  In 1979, the disenchanted faction, led by Louis Farrakhan, split from Wallace’s new American Muslim Mission that now allowed white members.  Farrakhan’s group adhered to the original teachings of black supremacy and once again called themselves NOI.

The Watchman Expositor[5] an independent Christian research and apologetics ministry founded in 1979 states that, “Although Farrakhan's organization claims to be the authentic Nation of Islam, there are three other organizations making this same claim.  John Muhammad, Elijah Muhammad's blood brother, heads one, based in Detroit.  A second organization is based in Atlanta and headed by Silas Muhammad.  Emanuel Abdulla Muhammad established a third organization in Baltimore.  The most recognized of the four organizations is that founded by Louis Farrakhan.”

In part 2 we will delve deeper into the world of NOI and discover that they may actually have more in common with Scientology then Islam and spend some time comparing tenants of faith.

[1] Gnosis Magazine, p.  59.  & Lincoln, The Black Church Since Frazier, (New York: Schocken Books, 1989) p.  163.  Both cited in the article The Nation of Islam and  archived at http://www.watchman.org/profile/nationofislampro.htm