The True Religion (part 4 of 8): The Message of False Religions

Description: The fourth chapter of the book “The True Religion.”  How one can recognize a false religion upon study of its basic message. 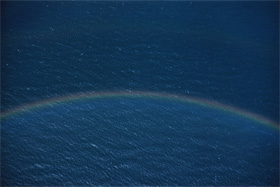 There are so many sects, cults, religions, philosophies, and movements in the world, all of which claim to be the right way or the only true path of God.  How can one determine which one is correct or whether, in fact, all are correct?  One method by which the answer can be found is to clear away the superficial differences in the teachings of the various claimants to the ultimate truth, and identifies the central object of worship upon which they call, directly or indirectly.  False religions all have in common one basic concept with regard to God: they either claim that all men are gods, or that specific men were God, or that nature is God, or that God is a figment of man’s imagination.

Thus, it may be stated that the basic message of false religion is that God may be worshipped in the form of His creation.  False religions invite man to the worship of creation by calling the creation or some aspect of it God.  For example, Prophet Jesus invited his followers to worship God, but those who claim to be Jesus followers today call people to worship Jesus, claiming that he was God.

Buddha was a reformer who introduced a number of humanistic principles in the religion of India.  He did not claim to be God, nor did he suggest to his followers that he be an object of worship.  Yet today most Buddhists who are to be found outside of India have taken him to be God and they prostrate themselves to idols made in their perception of his likeness.

By using the principle of identifying the object of worship, we can easily detect false religions and the contrived nature of their origin.  As God said in the Quran:

“You do not worship besides Him but only names which you have named, you and your forefathers, for which Allah has sent down no authority: the command belongs only to Allah: He has commanded that you worship Him; that is the right religion, but most men do not understand.” (Quran 12:40)

It may be argued that all religions teach good things, so why should it matter which one we follow?  The reply is that all false religions teach the greatest evil the worship of creation.  Creation-worship is the greatest sin that man can commit because it contradicts the very purpose of his creation.  Man was created to worship God alone as Allah has explicitly stated in the Quran:

Consequently, the worship of creation, which is the essence of idolatry is the only unforgivable sin.  One who dies in this state of idolatry, has sealed his fate in the next life.  This is not an opinion, but a revealed fact stated by God in his final revelation to man:

“Verily Allah will not forgive the joining of partners with Him, but He may forgive (sins) less than that for whomsoever He wishes...” (Quran 4:48, 4:116)