What is Buddhism? (part 1 of 2): The Path to Enlightenment

Description: A brief overview of Buddhism.

Definition: A widespread Asian religion or philosophy, founded by Siddartha Gautama in NE India in the 5th century BCE, which teaches that enlightenment may be reached by elimination of earthly desires and of the idea of the self.[1] 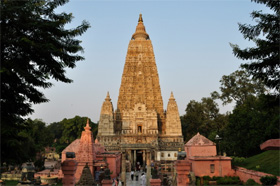 Buddhism is the religion of more than 500 million people around the globe.  The majority of those people live in Asia but there are substantial Buddhist communities in other continents.  There are two main Buddhist traditions, Theravada (The School of the Elders) and Mahayana (The Great Vehicle).  Buddhism is not strictly a religion and is often described a philosophy of life.

Who was the Buddha?

According to Theravada scripture the Buddha (Siddartha Gautama) was born in the 5th century BCE.  He was the son of King Śuddhodana, the ruler of a small kingdom in what is modern day Nepal.  Shortly after his birth, eight Brahmins were called upon to predict the child’s future.  Seven Brahmins prophesised that the young prince would either be a great ruler, or renounce worldly pleasures and live the life of a holy man.  One however, was sure the child would be a holy man.  The King had great worldly ambitions for his son therefore kept the Prince within the confines of the royal palace.  At age 29 the prince escaped confinement and had several encounters with the outside world.  These encounters became known in scripture as the four sights.

When Siddartha saw an old man, a sick person, a corpse and an aesthetic who had renounced all worldly goods he resolved to embark on a spiritual quest.  This quest was to find a permanent end to the suffering he observed.  He studied with the best religious teachers but found they could not put a permanent end to suffering.  He next practised extreme aestheticism, believing that he could free the human spirit by denying the flesh.  Siddartha underwent prolonged fasting, breath-holding, exposure to pain and almost starved himself to death before he realised that this was not the way to put an end to human suffering.

Siddartha did not abandon his quest but decided to trust his own inner feelings and practice meditation.  He sat under a fig tree, known as the Bodhi tree, in the town of Bodh Gaya, India, and vowed not to rise before achieving enlightenment.  After a number of days he destroyed the restraints of his mind, liberating himself from the cycle of suffering and rebirth, thus becoming  a fully enlightened being.  It was through this meditation that Siddartha discovered what Buddhists call the Middle Way, a path of moderation between the extremes of self-indulgence and self-mortification.[2]  Shortly after enlightenment Buddha (the awakened one) previously known as Siddartha formed a monastic order and spent the rest of his life travelling and teaching the path to enlightenment.  The Buddha died at around 80 years of age in Kushinagar, India.[3]

This account is according to the Theravada school of thought and differs somewhat from other accounts.  The historical accuracy has also been called into question but according to author Michael Carrithers, “the outline of the life must be true: birth, maturity, renunciation, search, awakening and liberation, teaching, death”.[4]

Buddhism is divided into two main divisions and several sub divisions based on country and culture, however most traditions share a fundamental set of beliefs.  One fundamental belief of Buddhism is often referred to as reincarnation however this is not strictly correct.  The Buddhist belief is rebirth rather than reincarnation.  The internet site Religious Tolerance explains it in the following way.

“In reincarnation, the individual may recur repeatedly.  In rebirth, a person does not necessarily return to Earth as the same entity ever again.  He compares it to a leaf growing on a tree.  When the withering leaf falls off, a new leaf will eventually replace it.  It is similar to the old leaf, but it is not identical to the original leaf.”[5]

The way or path is known as the eightfold path  and consists of dṛṣṭi (ditthi): viewing reality as it is, not just as it appears to be, saṃkalpa (sankappa): intention of renunciation, freedom and harmlessness, vāc (vāca): speaking in a truthful and non-hurtful way, karman (kammanta): acting in a non-harmful way, ājīvana (ājīva): a non-harmful livelihood, vyāyāma (vāyāma): making an effort to improve, smṛti (sati): awareness to see things for what they are with clear consciousness, being aware of the present reality within oneself, without any craving or aversion, samādhi (samādhi): correct meditation or concentration.

The five precepts outline Buddhist ethics.  Do not kill, be kind to all creatures.  Do not steal, give rather than take.  Do not lie, be honest and open.  Do not misuse sex and do not consume alcohol or use recreational drugs.

Just as the Hindu and Buddhist explanations of reincarnation and rebirth differ so too does the use us the term nirvana.  In Hinduism it is union with the Supreme Being, to aesthetic holy men in various Indian religions including Jainism, Hinduism and Buddhism it is the state of being free from suffering and in Buddhism it takes on its literal meaning of “blowing out” or extinguishing the fires of hatred, greed and delusion.  Nirvana is also characterized by transcendental knowledge or bodhi a concept translated into English as ‘enlightenment’.  The Buddha himself never gave an exact definition of Nirvana.  However there is no God in Buddhism, rather, by breaking the cycle of rebirth and achieving enlightenment Buddhists believe that they will reach the state of Nirvana – eternal being, the end of suffering, a state where there are no desires and individual consciousness has come to an end.

In the next article we will delve a little deeper by discussing further the concept of God in Buddhism and comparing some of the basic Buddhist beliefs with Islamic teachings.