Concept of Gender Equality in Islam (part 1 of 2): Physiology

Description: To be treated equally, or justice, does not always mean that each is the same.  This article sheds some light on the differences between men and women found by modern science, and how these results reflect the way justice is met to each of the two sexes in various realms of modern day life. 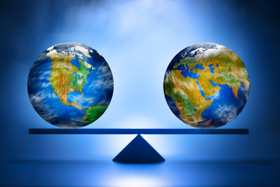 Before discussing the concept of equality and how it relates to men and women in Islam, we need to make an important distinction.  Many people who speak about equality presume that this should be reflected in treating two groups exactly the same.  However, this is manifestly not always the proper thing to do.  People’s needs, strengths, abilities and disabilities need to be accommodated and considered as opposed to subjecting all to a single standard that may only be suitable for a few.

When it comes to men and women, everyone recognizes that there are inherent indisputable differences between men and women.  They are not identical; men and women are naturally different in many ways.  As a result, it does not follow logically to neglect those differences and advocate a single standard in matters where they are not the same.  That may be procedural equality, but it is not substantive equality.  For example, it would be unjust for a husband to suggest that his wife work equally as hard as he does when she is pregnant.  Justice is served by recognizing the burden of pregnancy and the need for the husband to adjust accordingly.  There are obvious biological differences - men experience neither menstrual periods nor childbirth while women generally live longer and have less health problems at an elderly age.  The AARP Bulletin published[1]  an article on 8 health differences between men and women:

When it comes to health, differences between men and women extend well beyond their attitude toward getting annual checkups and needed treatment.  In case men need a few reasons to make a doctor’s appointment, they should consider the following:

·        Sleep apnea, a potentially serious disorder that causes breathing to stop and start repeatedly during sleep, is more common in men than women.

·        Four times as many men die by suicide, the number-eight cause of death among men.

In academics, women generally score higher than men in subjects such as languages and humanities while the opposite is true for mathematics and sciences.  Both genders have unique strengths and capabilities.  Concerning the psychological differences between men and women, an article entitled Men and Women Really Do Think Differently quotes a recent neurological study:

Psychology professor Richard Haier of the University of California, Irvine led the research along with colleagues from the University of New Mexico.  Their findings show that in general, men have nearly 6.5 times the amount of gray matter related to general intelligence compared with women, whereas women have nearly 10 times the amount of white matter related to intelligence compared to men.  [...]In human brains, gray matter represents information processing centers, whereas white matter works to network these processing centers.

The results from this study may help explain why men and women excel at different types of tasks, said co-author and neuropsychologist Rex Jung of the University of New Mexico.  For example, men tend to do better with tasks requiring more localized processing, such as mathematics, Jung said, while women are better at integrating and assimilating information from distributed gray-matter regions of the brain, which aids language skills.[3]

Another article published in Psychology Today describes the differences between men and women as ‘inescapable’:

When it comes to speaking and making hand movements that contribute to motor skill, the brain seems to be very focally organized in women compared with men.  This may relate to the fact that girls generally speak earlier, articulate better and also have better fine motor control of the hands.  Also, a larger proportion of women than men are right-handed, and unequivocally so.  But when it comes to certain, more-abstract tasks, such as defining words, women’s brains are more diffusely organized than men’s, although men and women don’t differ in overall vocabulary ability.

[...] Neuropsychologist Marian Diamond of the University of California at Berkeley, comparing cortical thickness in male and female rats, did find that the right cortex is thicker in males at most ages, while the left cortex is thicker in females but only at some ages (see “A Love Affair with the brain,” Psychology Today, November 1984).  [...]The fact seems inescapable that men and women do differ genetically, physiologically and in many important ways psychologically.[4]

Modern psychological research continues to unveil differences in men and women from the most obvious in behavioral patterns to those as trivial as picking out an angry face in a crowd.  In light of such manifest differences between the two genders, it is unsuitable for men and women to assume identical roles.  As mentioned in a New York Times article on Women’s health:

God created us with different but complementary strengths and capabilities.  A man does not need to become a woman nor vice versa in order to be successful.

Concept of Gender Equality in Islam (part 2 of 2): Substantive Equality of Men and Women

Description: Spiritual equality of men and women as mentioned in the Quran, and a glance at the differences between the genders in other aspects of life.

Islam recognizes that while men and women have some physical differences, spiritually they enjoy absolute equality before God.  The Quran and Sunnah are unequivocal in stating that one’s gender will have absolutely no bearing on their reward or punishment in the next life.

“I shall not lose sight of the labor of any of you who labors in My way, be it man or woman; you proceed one from another…” (Quran 3:195)

“If any do deeds of righteousness,- be they male or female - and have faith, they will enter Heaven, and not the least injustice will be done to them.” (Quran 4:124)

“Whoever works righteousness, man or woman, and has Faith, verily, to him will We give a new Life, a life that is good and pure, and We will bestow on such their reward according to the best of their actions.” (Quran 16:97)

“He that works evil will not be requited but by the like thereof: and he that works a righteous deed - whether man or woman - and is a Believer- such will enter the Garden (of Bliss): Therein will they have abundance without measure.” (Quran 40:40)

“O mankind!  We have created you from a male and a female, and made you into nations and tribes, that you may know one another.  Verily, the most honorable of you with God is the most pious.  Verily, God is All-Knowing, All-Aware.” (Quran 49:13)

Therefore, Islam openly declares that men and women have an equal status and value before God, and piety alone differentiates one individual from another.

In legal and practical aspects, the general rules are the same for men and women.  Both have the same acts of worships, the same Islamic etiquette and manners, and are subject to the same legal penalties.  But there are also many cases where the rulings are different.  Women are exempted from fasting and prayer during their period.  Men are prohibited from wearing gold and silk while women are allowed to, as it is women’s nature to beautify themselves.  Friday prayers are obligatory for men but optional for women.  Men must spend their money on the family but a woman’s money is entirely her own to spend as she chooses.  There are differences in clothing requirements as well, since the physical appearance of men and women is dissimilar.  All of this is reflective of the natural differences between men and women.  So in lesser jurisprudential matters, Islam treats men and women according to their inherent differences as per substantive equality and in the interest of justice.