Description: Alcohol and its adverse effects as understood by statistics across the world. 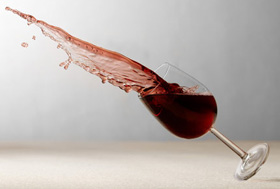 In the year 988 CE, Prince Vladimir, sovereign leader of Kievan Russia, opted for Orthodox Christianity as his state religion.  Legend says his ambassadors were much more impressed with the gold and grandeur of Byzantine’s cathedrals, especially Constantinople’s Church of Santa Sophia (now Istanbul’s Mosque of Haya Sofiya) than they were with the simple and austere décor of the Islamic houses of worship (i.e. the mosques) in nearby Volga Bulgaria.  But another, more telling reason for the Russian Prince’s favoring Christianity over Islam was, so the chroniclers tell us, the Russians’ love of alcohol.  The Muslims’ absolute abstention from liquor was a sacrifice too far for Vladimir’s countrymen to make.  Alas, it would appear that their insatiable thirst for a “good” drink, particularly vodka, has plagued the Russian nation ever since.

According to a report published in the year 2000[1], a staggering two thirds of Russian men die drunk and more than half of that number die in extreme stages of alcoholic intoxication.  At 57.4 years, Russian men have the lowest life expectancy in Europe.  Although heart disease, accidents and suicides account for nearly 75% of male deaths, they are seldom sober when they die.  Wrote the daily Kommersant newspaper in commentary of a three-year study of men aged between 20 and 55 in Moscow and Udmurita:

“Everyone is drunk: murderers and their victims, drowning victims, suicides, drivers and pedestrians killed in traffic accidents, victims of heart attacks and ulcers.”

Though they make for bleak reading, these statistics should not and do not suggest that alcoholism be taken as an ethnic marker for the Russian, nor indeed for any other tribe from the children of Adam.  As Mr. Cherniyenko, vice chairman of the National Organization of Russian Muslims, remarks:

“One can say that drinking vodka or wine is a significant aspect of Russian culture, yet I can be a good Russian while not drinking alcohol...  Most of the social problems in Russia are caused by alcohol consumption.  If we can introduce some Islamic social values to Russia, society and the country will become stronger.”

Looking much further west across the Atlantic (or east across the Bearing Straits) towards Russia’s great rival during the Cold War, the United States, we find that the American nation does not fair much better when it comes to drink-related death and injury.  According to a 1988 study by the American Medical Association, some 100,000 deaths and $85.8 billion are linked to the abuse of alcohol, with 25 to 40 percent of hospital beds being occupied by people being treated for alcohol-induced complications.  Alcohol is also the US’s leading cause of traffic accidents, with 17,126 people killed in alcohol-related crashes in 1996 alone, according to government statistics.  Alcohol is also the principle cause of family breakdown in the US.  And in another report published in 2006 by the U.S.  Center for Disease Control and Prevention, test results from suicide victims in 13 states showed that 33.3 per cent – one in three! - had alcohol in their blood.  But again, statistics aside, there is nothing intrinsic in the American physiology that consigns it to an alcoholic abyss.  Take the bottle away from the American, as happened in one particular Islamic setting, and a rather different result is recorded.

“Our sick call rate went down, our accident and injury rate went down, our incidents of indiscipline went down, and health of the force went up.  So there were some very therapeutic outcomes from the fact that no alcohol was available whatsoever in the kingdom (of Saudi Arabia).” (Gen. Norman Schwarzkopf, commander of allied forces in the Persian Gulf War, explaining to the US Congress how a scarcity of alcohol made for a better American soldier.  June 13, 1991)

Even the unborn are not safe from the dangers of alcohol.  Fetal alcohol syndrome is a rather nasty disease caused by exposure to alcohol in the womb.  The disease strikes one to two babies in every 1,000 births worldwide and results in chronic physical and neurological damage.  According to a 10-year German study[2], symptoms include long-lasting brain damage and temporary physical deformities including a smallness of the head and stunted growth.  To avoid fetal alcohol syndrome, not only are mothers recommended to completely avoid alcoholic drink during pregnancy, but doctors also recommend that men practice abstinence for several months prior to conception.

Suicide, homicide, domestic violence, grievous bodily harm, vandalism, self abuse and unborn-child abuse! – all evil consequences of alcohol consumption.  And yet, the disease of alcohol is easily and roundly avoided by the adherents to the religion of Islam, or by those who find themselves in areas where Islamic writ is observed.  For if alcohol is indeed a disease, no less the Devil’s deadly disease, then it is one from which the pious Muslim is immune, even though it be the only disease which

·        is advertised in newspapers, magazines, radios and television;

“O you who believe!  Intoxicants (all kinds of alcoholic drinks), gambling, idolatory and the divining of arrows are an abomination of Satan's handiwork.  So avoid (strictly all) that (abomination) in order that you may be successful.  Satan seeks only to cast amongst you enmity and hatred by means of strong drink and gambling, and hinder you from the remembrance of God and from his worship.  Will you then not abstain?” (Quran 5:90-91)

[3] This bulleted list was fist published by IPCI, Durban, in a pamphlet entitled: Fire in your bellies.