Description: A brief overview of Hinduism in a series of articles discussing it from a comparative religions perspective. 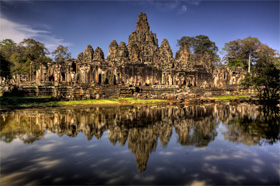 This is the first article in a series discussing Hinduism from a comparative religions perspective.  Although as Muslims we believe wholeheartedly that there is only One God and Mohammad is His messenger, and that Islam is the religion of those who are submitted to God, these articles are not intended to denigrate other religions or their followers. Our intention is, as the title suggests, to compare religions.

Hinduism[1]  is the religion of the majority of people residing in India and Nepal. There are also large numbers of adherents scattered across the globe. Hinduism is the third largest religion in the world with approximately 950 million followers behind Christianity and Islam. It is sometimes thought of as the oldest living religion with elements that stretch back thousands of years, many scholars suggesting that it began more than 4000 years before the Common Era.

Hinduism which derives its name from the Persian name for river, originated in the Indus river valley. It is a collection of practices and beliefs with no single founder, no single scripture and no single set of beliefs. Hinduism is also closely conceptually and historically associated with the other predominantly Indian religions Jainism, Buddhism and Sikhism.

Central to Hindu worship is the image, or icon, which is worshipped either at home or in a temple. Worship to them is primarily an individual act rather than a communal one, as it involves making personal offerings to the deity and chanting or repeating  the names of favourite gods and goddesses. Water, fruit, flowers and incense are  offered and pilgrimage to various stones, rivers, mountains and temples is thought to be seen by the particular deity being worshipped.

Hinduism is frequently described as a polytheistic religion due to the vast array of gods and deities, often based on needs or regions, and worship that almost always focuses on sculptures and images. However there are many who define Hinduism as monotheistic because of the belief in the supreme God – Brahman, whose qualities and forms are represented by the multitude of deities which emanate from him. Brahman is a Sanskrit word which refers to a transcendent power beyond the universe often translated as God whom it is said, can have unlimited forms and expressions.

There are also those who view Hinduism as Trinitarian because Brahman is simultaneously visualized as a triad. The triumvirate consists of three gods who are responsible for the creation, upkeep and destruction of the world.  They are Brahma,(who should not be confused with Brahman, the supreme god energy), Vishnu and Shiva. Brahma is responsible for the creation, Vishnu is the preserver of the universe, while Shiva's role is to destroy it in order to re-create.

Hinduism has many scriptures; the Vedas, the Upanishads, and the Bhagavad-Gita are considered the most important. Most Hindus believe the soul, or atman, is eternal, and goes through a cycle of birth, death, and rebirth (samsara) determined by one's positive or negative karma, or the consequences of one's actions. The goal of religious life is to learn to act so as to finally achieve liberation (moksha) of one's soul, escaping the rebirth cycle.

It is difficult to answer the question, is Hinduism polytheistic, pantheistic or monotheistic? We arrive at various answers from various sources, all equally correct according to each understanding of Hinduism. Hinduism worships multiple forms of the one God.[2]  According to the tenets of Hinduism, God is one as well as many.[3]  Hindus believe in monotheistic polytheism, rather than polytheism.[4]  Even though Hinduism is mistakenly regarded by many as a religion having many gods namely, polytheism, yet truly speaking Hinduism is a monotheistic religion.[5]

Religion Facts[6]  tries to make sense of the differing definitions by saying that, ‘Although "monotheism" literally means belief in the existence of one God, the term has come to denote belief in a God who created and is distinct from the universe. Pantheism is the view that God is essentially identical with the universe and totally immanent in the world: God is the universe and the universe is God. Thus pantheism seems to be the most accurate label for Hinduism. The "with polytheistic elements" qualifier is added because the Supreme Being of Hinduism is most often worshipped in the form of multiple deities. However, it must be noted that this is a generalization that does not describe the beliefs of all Hindus. Some regard the universe as created by and essentially distinct from God, and are therefore "monotheistic" in the traditional sense.’

In just a few short paragraphs we have attempted to sum up thousands of years of traditions that have come about via freedom of belief and practice.  There are ten basic human values inherent in Hinduism; however there are several entrenched practices that completely go against the tenants of Islam. These include the caste system and the devaluation of women. As mentioned above, Hinduism involves the belief in reincarnation and this too is unable to be reconciled with the teachings of Islam. Until recently Hinduism was considered the world’s most religiously tolerant faith. However mass conversions to other faiths has resulted in incidents of intolerance.

In part two we will discuss the status of women in Hinduism, the painful legacy left by the caste system, officially outlawed in India in 1949, and two glaring doctrinal differences between Hinduism and Islam, the worship of something other than God and the belief in reincarnation.

[1] Except for specific quotations the majority of the information about Hinduism is obtained from the following web sites. http://www.bbc.co.uk/religion/religions/hinduism/ataglance/glance.shtml & https://www.cia.gov/library/publications/the-world-factbook/fields/2122.html & http://www.religioustolerance.org/hinduism4.htm

Next: Hinduism (part 2 of 4): Idol worship and Reincarnation

Here is a comparison between Hinduism and Islam and could help see the differences between the two religions...

Assalam alaikum your articles are insiprational I had learned a lot from you thank you for being hear and teach us about our islam religion.

This is so helpful

The scripture is so useful...thanks a lot