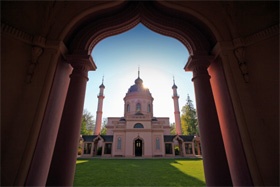 The most fundamental belief in Islam is that there is no true god (deity) but Allah.  He, the One, the Only, the First and the Last, has no partners, sons, daughters or intermediaries.  He is Alone in His Dominion and in His Omnipotence.  It is a very simple concept, it is simply the truth.  Nevertheless sometimes the pure belief in God can be overwhelming.  Often we are surprised when we call for God and He answers immediately.

The religion of Islam encompasses that simple concept – that God is One and wraps it in a package called submission.  Islam means, submission to the will of God. The root word of Islam (sa-la-ma) is the same that is shared with the Arabic word meaning peace and security. In essence, peace and security comes from living life according to God’s will.  Like a circle of life it always begins and ends in the same place – there is no god but Allah.  When we submit to the will of God, we are Muslims and to demonstrate our sincerity we testify that we are Muslim by saying, alone or in the company of other Muslims, La ilah illa Allah, Muhammad rasoolu Allah.  There is no true god (deity) but Allah and Muhammad, may the mercy and blessings of God be upon him, is His messenger.

Whenever any human being experiences and understands God’s mercy, Satan tries his best to harm that individual.  Satan does not want us to feel comfort and mercy; he wants us to feel anxious and depressed.  He wants us to make mistakes and commit sins.  Satan despairs of ever feeling God’s love therefore he wants to corrupt as many human beings as he can.

(Satan said)  “…surely I will sit in wait against them (human beings) on Your Straight Path.  Then I will come to them from before them and behind them, from their right and from their left…” (Quran 7:16-17)

Satan’s whispers try to  prevent us from converting to Islam.  These ideas should not stand in the way of a person connecting, or reconnecting with the Most Merciful God.  In this series or articles we will discusssome of the most prominent myths, lay them open to scrutiny and see that God is indeed Most Merciful.  He makes converting to Islam easy, not difficult.  No buts!

A person embracing Islam does not have to change his or her name.  Prophet Muhammad, may the mercy and blessings of God be upon him, said that everybody was entitled to a good name, a name that had meaning or character.  For the vast majority of people it is not an issue, however if you discover that your name has a bad meaning or an association with sinners or tyrants it is better to change it to something more acceptable.  If the person’s name is a name of an idol or reflects servitude to something or someone other than God, then it has to be changed.  Remember though that Islam is easy.  If changing your name officially would cause hardship, distress or harm, it would suffice to change it only among friends and family.

The religion of Islam was revealed for all people, in all places, at all times.  It is not a religion exclusively for Arabs or Arabic speakers.  In fact the majority of the world’s 1.4 billion Muslims are not from an Arab background.  A person can become Muslim without knowing a single word of Arabic; it does not affect his or her ability to accept Islam.  However, the language of Quran is Arabic and the daily prayers are performed in Arabic, so although it is not necessary to learn the whole language, after conversion it will be necessary to learn some Arabic words.

If a person is unable to learn enough Arabic to perform his prayers because of a speech defect or because he is not able to pronounce the Arabic, he must try as much as he can.  If learning at least some Arabic is not possible, then he is relieved of this obligation, because God does not burden people with more than they are able to bear.  However God also says that he has made learning Quran easy, therefore it is obligatory for a person to try his best.

“And We have indeed made the Quran easy to understand and remember” (Quran 54:17)

A man came to the Prophet and said: “O Messenger of God, teach me something of the Quran that will suffice me, for I cannot read.” He said, “Say: Subhaan-Allaah wa’l-hamdu Lillaah wa laa ilaaha ill-Allaah wa Allaahu akbar wa laa hawla wa la quwwata illa Billaah (Far removed is God from every imperfection, praise be to God, there is no god except Allah and God is Most great, there is no god except Allah and there is no power or strength except with God).”[1]

Entering the fold of Islam is easy.  It is a simple process, free of complications.  In part 2 we will discuss circumcision, the fact that Islam has no ethnic or race restrictions and becoming Muslim without knowing very much about Islam.

Next: I want to be a Muslim but... Myths about Converting to Islam (part 2 of 3)