Description: How the Mercy of God encompasses those who fall into sin. 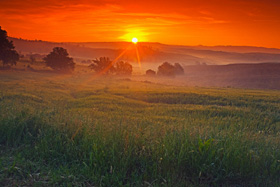 God’s mercy is intimately close to everyone of us, awaiting to embrace when we are ready.  Islam recognizes human propensity to sin, for God has created man weak.  The Prophet stated:

"All the children of Adam constantly err…"

At the same time, God lets us know He forgives sins.  Continuing the same hadeeth:

"Say, ‘O My servants, who have transgressed against their souls!  Despair not of the Mercy of God: for God forgives all sins, for He is Oft-Forgiving, Most-Merciful.’" (Quran 39:53)

Muhammad, the Prophet of Mercy, was charged to convey the good news to all people:

"Tell My servants that I am indeed the Oft-Forgiving, Most Merciful." (Quran 15:49)

Since ancient times, God’s saving mercy has rescued the faithful from pending doom:

"And so, when Our judgment came to pass, by Our mercy We saved Hud and those who shared his faith…." (Quran 11:58)

"And so, when Our judgment came to pass, by Our mercy We saved Shu’ayb and those who shared his faith…." (Quran 11:94)

Fullness of God’s compassion towards the sinner can be seen in the following:

"God does wish to turn to you, but the wish of those who follow their lusts is that you should turn away (from Him), -far, far away." (Quran 4:27)

"Know they not that God accepts repentance from His votaries, and receives their gifts of charity, and that God is indeed He, the Oft-Forgiving, Most-Merciful." (Quran 9:104)

"If mankind were not to commit sins, God would create other creatures who would commit sins, then He would forgive them, for He is Oft-Forgiving, Most-Merciful." (Al-Tirmidhi, Ibn Majah, Musnad Ahmed)

3.       God is Delighted When the Sinner Repents Because He Realizes He Has a Lord Who Forgives Sins!

"God is more delighted with the repentance of His slave when he repents, than any of you would be if (he found his) camel, which he had been riding in a barren desert, after it had escaped from him carrying his food and drink.  After he despaired of it, he came to a tree and laid down in its shade.  Then while he was despairing of it, the camel came and stood by his side, and he seized its reins and cried out in joy, ‘O God, You are my servant and I am your Lord!’ – making this mistake (in wording) out of his excessive joy." (Saheeh Muslim)

Divine mercy extends forgiveness every day and every night of the year.  The Prophet said:

5.       God Accepts Repentance Even If Sins Are Repeated

Repeatedly God shows His compassion to the sinner.  God’s loving-kindness to the Children of Israel can be seen before the sin of the golden calf had been committed, God dealt with Israel according to His compassion, even after their sinning, He dealt with them in mercy.  Ar-Rahman says:

"…and when We appointed for Moses forty nights [on Mount Sinai], and in his absence you took to worshipping the [golden] calf, and thus became evildoers: yet, even after that, We blotted out this your sin, so that you might have cause to be grateful." (Quran 2:51-52)

The Prophet has explained that accepting Islam wipes off all previous sins of the new Muslim, no matter how serious they were with one condition: the new Muslim accepts Islam purely for God.  Some people asked God’s Messenger, ‘O Messenger of God!  Will we be held responsible for what we did during the days of ignorance before accepting Islam?’  He replied:

"Whoever accepts Islam purely for God will not be held to account, but one who does so for some other reason will be accountable for the time before Islam and after." (Saheeh Al-Bukhari, Saheeh Muslim)

Although God’s mercy is sufficient to cover any sin, it does not free man from his responsibility to behave rightly.  Discipline and hard work is required along the path to salvation.  The Law of Salvation in Islam takes into account faith and keeping to the Law, not mere belief in God.  We are imperfect and weak and God created us this way.  When we fall short in keeping to the sacred Law, the Loving God is ready to forgive.  Forgiveness is received simply through confessing one’s sins to God alone and begging of His mercy, having a firm intention not to return to it..  But one should always remember that Paradise is not earned by virtue of one’s deeds alone, but is awarded by divine mercy.  The Prophet of Mercy made this fact clear:

"Not one of you will enter Paradise by his deeds alone.’  They asked, ‘Not even you, O Messenger of God?’  He said, ‘Not even me, unless God covers me with His grace and mercy." (Saheeh Muslim)

Belief in God, keeping to His Law, and good works, are considered the reason, not the price for admission into Paradise.

Previous: The Divine Mercy of God (part 2 of 3): Its Warm Embrace