Are we Alone? (part 3 of 3): Jinn exist amongst us but apart from us

Description: Where the jinn live and how to protect ourselves from them. 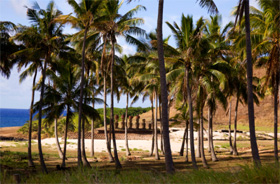 We are not alone!  This statement sounds a little like an ad for a science fiction movie.  It could be just that, but it is not.  We really are not alone here on earth.  We are God’s creatures but we are not God’s only creatures.  In the past two articles we have learned a great deal about the jinn.  We established that they were created by God, before the creation of humankind, from smokeless fire.  We also established that the jinn are both male and female, good and bad, believers and non believers.

Jinn exist in our world yet they are separate from it.  Shaytaan is from the jinn and his followers are from both the jinn and humankind.  Now that we understand that we are not alone, it becomes necessary to recognise signs indicating the presence of the jinn and know how to protect ourselves from their mischief and evil doing.

“And indeed, We created man from clay of altered mud.  And the jinn, We created aforetime from the smokeless flame of fire.” (Quran 15:26-27)

Because the jinn share this world with us we should know their dwelling places.  Jinn tend to gather together, sometimes in great numbers, in ruins and deserted places.  They tend to gather in places of filth, garbage dumps and graveyards.  Jinn at times congregate in places where it is easy for them to cause mischief and mayhem, such as market places.

In the traditions of Prophet Muhammad, may the mercy and blessings of God be upon him, we find that some of the companions advised people not to be the first to enter or the last to leave market places because they were the battle grounds for the devils and mischief makers.[1]

If a Shaytaan chooses a human dwelling as its own place of stay, we are given the “weapons” through which we can expel them from the homes. These include saying Bismillah (I begin with the name of God), remembering God frequently and reciting any words from the Quran but especially Chapters two and three.  The jinn also flee whenever they hear the call to prayer.

Prophet Muhammad explained that jinn congregate in great numbers and spread out as darkness falls.   He commanded us to keep our children inside at dusk for this reason.[2]  He also told us that the jinn have animals and that the food for their animals is the dung of our animals.

Sometimes, animals that belong to humankind are associated with the jinn.  For instance, many of the jinn are able to take on the form of snakes and Prophet Muhammad referred to black dogs as devils.  He also said, “Do not pray in camels’ pens for devils dwell therein.”[3]  He associated camels with jinn due to their aggressive nature.

There are many ways that we can protect ourselves and our families from the mischief caused by the jinn.  The most important is to turn to God and seek his protection; we do this by adhering to the words of Quran and the teachings of Prophet Muhammad.  Seeking refuge in God will protect us from the jinn and devils.  We should seek His protection when we enter the bathroom[4], when we become angry[5], before sexual intercourse[6], and resting on a journey or travelling into a valley[7].  It is also important to seek refuge with God when reading Quran.

“So when you want to recite the Quran, seek refuge with God from Shaytaan (Satan), the outcast (the cursed one).  Verily! He has no power over those who believe and put their trust only in their Lord.” (Quran 16:98-99)

Understanding the nature of the jinn makes it possible to understand some of the strange phenomena that occur in our world today.  People turn to fortune tellers and psychics to see into the future or the unknown.  Men and women on the television and internet claim to speak to dead people and relay secrets and mysterious information.   Islam teaches us that this is not possible.  Soothsayers and astrologists allege that they can predict the future and read personalities by the alignment of the stars and other heavenly bodies.  Islam teaches us that this too is not possible.

“And we have sought to reach the heaven; but found it filled with stern guards and flaming fires.  And verily, we used to sit there in stations, to (steal) a hearing, but any who listens now will find a flaming fire watching him in ambush.  And we know not whether evil is intended for those on earth, or whether their Lord intends for them a Right Path.” (Quran 72:8-10)

Prophet Muhammad explained the meaning of these verses.   “When God has ordained some affair in the Heaven, the angels beat with their wings in obedience to His statement, which sounds like a chain dragged over a rock. They (angels) say, ‘What was it that your Lord said? Some answer, ‘The truth, And He is the Most High, the Most Great.’ (Quran 34.23) Then those who gain a hearing by stealing (i.e.  devils or jinn) stand one over the other.  A flame may overtake and burn the eavesdropper before he conveys  the news to the one below him, or it may not overtake him till he has conveyed it to the one below him, who in his turn, conveys it to the one below him, and so on till they convey the news to the earth.[8]

The jinn are able to take a grain of truth and mix it with lies to confuse and confound people.  Strange phenomena though disconcerting and sometimes scary are nothing more than evil mischief making designed to tear people away from God.  Sometimes the jinn and human devils will team up to trick the believers into committing the sin of shirk –associating partners with God.

Sometimes in this strange and wonderful world we are confronted with trials and tribulations that often seem to weigh us down.  Dealing with the mischief making and evil intentions of the jinn seems to be an even bigger test.  However it is comforting to know that God is the source of all strength and power and that nothing happens without his permission.

Prophet Muhammad told us that the best words with which to seek God’s protection from the evil of mankind and jinn are the last three chapters of the Quran.  We may at times have to face the evil doing of the jinn but God is our safe haven, turning to Him is our rescue.  There is no protection except the protection of God, it is Him alone that we worship and it is to Him alone that we turn to for help.

This site has been a God send for me. As a Christian living in a Musslim country, this site has given me a greater understanding of Islam, the people and the lifestyle. To study it is a joy!!