Description: What are Jinn? 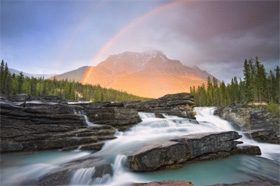 Throughout history humankind has been attracted to the supernatural.  Spirits, ghosts and many other strange creatures have filled our minds and captured our imaginations.  Strange and beguiling spectres have at times lead people to commit the greatest of all sins – Shirk.[1] So are these spirits real?  Are they more than just figments of our imagination, or shadows moulded from smoke and illusion? Well, according  to Muslims they are very real.   Spirits, ghosts, banshees, poltergeists and phantoms can all be explained when one understands the Islamic concept of spirits – the world of the Jinn.

Jinn, is a word not completely unheard of by English speakers. Notice the similarity between Jinn and Geni. TV and the movies have all played their part in depicting genies as playful creatures able to fulfill all of humankind’s wishes. The geni in the television series “I Dream of Jeanie” was a young woman who always managed to create playful mischief, and in Disney animated film “Aladdin”, the genie was depicted as loveable rouge. Despite this the jinn are not part of a harmless fairy story; they are very real and can pose a very real threat to humankind.

However God, the Most Wise, has not left us defenceless. He explained the nature of the jinn very clearly. We know their methods and motives because God has revealed these things to us in the Quran and in the traditions of Prophet Muhammad, may the mercy and blessings of God be upon him. He has given us the “weapons” to protect ourselves and the means to resist his persuasion. First however, we must be clear about just exactly what jinn are.

The Arabic word Jinn is from the verb ‘Janna’ and means to hide or conceal. The Jinn are so called because they conceal themselves from people’s sight. The words janeen (foetus) and mijann (shield) come from the same root.[2]  Jinn, as the name suggests, are normally invisible to humans. The jinn are part of God’s creation. They were created from fire before the creation of Adam and humankind.

And indeed, We created man from dried (sounding) clay of altered mud. And the jinn, We created aforetime from the smokeless flame of fire (Quran 15:26-27)

According to the traditions of Prophet Muhammad the angels were created from light, the jinn from fire and humankind from “what has been described to you”. (meaning clay)[3]  God created the angels, jinn and humankind for no other purpose then to worship Him.

Jinn exist in our world but they live on their own. Jinn have their own distinct nature and features and they generally remain hidden from humankind.  Jinn and humans do have some common traits, the most important of which is free will and with it the ability to choose between good and evil, right and wrong. The jinn eat and drink, they marry, have children and die.

Islamic scholar Ibn Abd al Barr said the jinn have several names and are of various types. In general, they are called jinn; a jinn who lives among people (a haunter or dweller) is called Aamir, and if it is the type of jinn that attaches itself to a child it is called Arwaah. An evil jinn is often called Shaytaan (devil), when they are more  than evil, demonic, they are called Maarid, and the most evil and strong jinn are called Ifreet (plural afaareet).[4]  In the traditions of Prophet Muhammad the jinn are divided into three classes; those who have wings and fly in the air, those who resemble snakes and dogs, and those who travel about endlessly.[5]

Among the jinn are those who believe in God and the message of all the Prophets of God and there are those who do not. There are also those who will abandon their evil ways and become true believers, faithful and patient.

“Say (O’ Muhammad): It has been revealed to me that a group of Jinn listened and said; ‘Indeed we have heard a marvelous Quran. It guides unto righteousness so we have believed in it, and we will never make partners with our Lord.” (Quran 72: 1-2)

The jinn are accountable to God and subject to His commands and prohibitions. They will be called to account and will enter either Paradise or Hell.  The jinn will be present with humankind on the Day of Resurrection and God will address them both.

“O you assembly of jinn and humankind! “Did not there come to you Messengers from amongst you, reciting unto you My Verses and warning you of the meeting of this Day of yours?” They will say, “We bear witness against ourselves.” (Quran 6:130)

So far we have learned that supernatural beings do exist. We are not alone. They are creatures that live with us, yet apart from us.  Their existence offers an explanation for many strange and unsettling occurrences. We know that jinn are both good and evil, although the mischief makers and evildoers far outnumber the believers.

The concept of Shaytaan being a fallen angel is from the doctrines of Christianity, but according to Islam Shaytaan is a jinn, not an angel.  God speaks about Shaytaan a great deal in the Quran. In part two we will discuss more about Satan himself and what caused him to be cast out from God’s mercy.

[1] Shirk – is the sin of idolatry or polytheism.  Islam teaches that there is One God, Alone, without partners, offspring or intermediaries.

Great article, but being a convert of nearly two years, I still have a little trouble understanding the concept of Jinn.