Description: How a mother of five children discovered Islam at the age of 67.  Part 3: Role of her son. 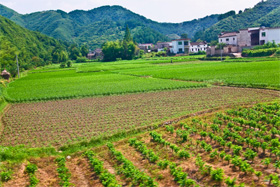 I visited my daughter in Saudi Arabia and fell in love with the country, the weather, and the people.  I didn’t want to leave after the 6 months so I requested an extension.  I would hear the athan (call to prayer) 5 times a day and would see the faithful ones close their shops and walk off to prayer.  Although that was very touching, I continued reading from my Bible every morning and evening and would constantly say the rosary.  Not once did my daughter or any other Muslim person ever speak to me about Islam or try to get me to convert.  They respected me and allowed me to practice my religion.

My son was coming to Saudi Arabia to visit me.  I was so happy—I had missed him so.  No sooner did he come was he again after me, talking religion and the Oneness of God.  I was angry.  I told him that I have been in Saudi Arabia for over one year and not once has anyone ever spoken about religion to me.  And he, on his second night here, is so quick to begin the preaching.  He apologized and again told me how much he wanted me to accept Islam.  I again told him that I would never leave Christianity.  He asked me about the Trinity and how could I believe in something that just did not make any logical sense.  He reminded me that even I had questions about this.  I told him that everything does not have to make sense—you just have to have faith.  He seemed like he accepted this answer and I was happy that I finally won a discussion on religion.  My son then told me to explain the miracle of Jesus to him.  Aha, I thought! I am finally getting somewhere.  I explained the miracle birth of Jesus, the Virgin Mary, Jesus dying for our sins, God breathing His Spirit in him, Jesus as God, Jesus as the Son of God.  He was quiet the entire time I was talking—no rebuttal—my son, quiet? He then quietly asked, “Mamma, if Jesus died for our sins on a Friday, and then as you say, he was resurrected three days later on a Sunday, then who ruled the world for those three days? Mamma, explain that to me?” I thought about the logic to this question and at that moment, I knew that it did not make any sense.

I said, “Jesus was the son of God.  Jesus and God are one and the same.  My son replied, “Cows have calves; little cows.  Cats have kittens; little cats.  Humans have children; little humans.  When God has a son, what is he?  A little God?  If so, then do you have two Gods?”  Then he asked, “Mama, can you ever become a God?”  What a ridiculous question I told him.  Humans can never be a God.  (Now, I was really getting angry) He then asked, “Was Jesus a human being?”  I replied, “Yes.”  He then said “Therefore, he could never be God.” The claim that God became man is also an absurdity.  It is not befitting of God to take on human characteristics because it means that the Creator has become His creation.  However, the creation is a product of the creative act of the Creator.  If the Creator became His creation, it would mean that the Creator created Himself, which is an obvious absurdity.  To be created, He would first have to not exist, and, if He did not exist, how could He then create? Furthermore, if He were created, it would mean that He had a beginning, which also contradicts His being eternal.  By definition creation is in need of a creator.  For created beings to exist they must have a creator to bring them into existence.  God cannot need a creator because God is the Creator.  Thus, there is an obvious contradiction in terms.  The claim that God became His creation implies that He would need a creator, which is a ludicrous concept.  It contradicts the fundamental concept of God being uncreated, needing no creator and being the Creator.   Knowing I did not have an answer to him, I replied, “Let me think about the answer.”

That evening, I thought long and hard about what my son said.  The idea that Jesus as the son of God did not make sense to me anymore.  I also could not accept the fact as Jesus and God being one in the same.   Before going to sleep that night, my son told me to pray to God before going to sleep and ask Him alone to guide me to the right path.  I promised my son that I would sincerely supplicate to God for the answer.  I went to my room and read from the book my son had given me.  Next, I opened the Holy Quran and began to read.  It was if something had been lifted from my heart.  I felt different.  I saw the truth in Islam.  What had I been fighting against all these years?

That night I prayed to God alone—not to Jesus, not to Mary, not to the angels or saints or Holy Spirit.  Just to God I cried and asked for guidance.  I prayed that if Islam was the right choice to please change my heart and mind.  I went to sleep and the next morning I woke up and announced to my son that I was ready to accept Islam.  He was astonished.  We both began to cry.  My daughter and granddaughter were called out and watched as I submitted, “There is no God except Allah and Muhammad is His Messenger and Last Prophet.” I felt a changed woman.  I was happy, as if someone had lifted a veil of darkness from my heart.  Everyone who knew me couldn’t believe that I had converted.  Sometimes I couldn’t even believe it! But Islam felt so right, so peaceful, so serene!

After my son left back to the states, I learned how to recite Surah-al-Fatiha in Arabic and have since learned how to perform the prayers.  I continued with life as before; except now I am a Muslim.  I always loved attending family gatherings with my daughter, and social events as well.  I would attend family and friends weddings, henna parties, baby showers (aqiqah) and the gatherings when someone died.  About 6 months after I had converted to Islam, I was at a funeral gathering that really touched my heart and reinforced what a beautiful religion Islam is.  A young boy had died from a sickness.  As my daughter was getting ready to leave for the condolences, I asked her if she knew the family well.  She answered that she did not.  “Then why go?” I asked.  “Because the family is grieving, and it is my duty in Islam to go and perhaps offer any support that I can.”

I decided to dress and go with her.  I went along with my daughter to pay condolences to the boy’s family and was overwhelmed at the number of people in attendance.  I was surprised and touched that so many people came to give the family support.  All I could think of as I saw the family grieving was what a beautiful religion Islam was that so many people felt it their responsibility to give their support.  And that one event, where Muslims were showing an outpour of sympathy is another moment that proved the beauty of Islam.

I have been a Muslim for three years now, Alhamdullilah (All praise is to God).  Since that time, I have performed Umrah twice with my son and daughter.  My son, daughter and I visited the Kabaah and the Holy Prophet’s Mosque in Madinah.  I have just turned seventy

Alhumdullilah.  Sometimes I think back to all the hardship and heartache that I must have caused my son, but my son was extremely happy to serve me by also being a means to bring me to Islam.  He then said, that the Prophet, may the mercy and blessings of God be upon him, told a person, “Paradise lies under the feet of mothers”.  The meaning of the Hadith is that you should serve your mother and take good care of her.  It is for sure by being at my feet that there was paradise for both of us.  I also wonder if my daughter would have applied a little pressure on me, I might have become a Muslim sooner.  But my son reminded me that God is the best of planners.  And it is only He that can give a person Hidaya (Guidance).

“Indeed it is not such that you can guide whomever you love, but God guides whomever He wills.” (Quran 28:56)

The best thing that God had honored me is by guiding me to the path of Islam and making me a Muslim, and inshAllah (God-willing) enter together with my son in Paradise.  Ameen

i am glad for the people that converted maa shaallah may Allah put all of us in jannah.

when reading this article it truely touched me as i am too trying to fit in and believe! however this story had me in tears throughout and also laughing too! FANTASTIC mashallah x

Subhanaallah...to you sister well done...your story is very emotional..I can relate because I was a catholic too before. I grow up in a very religious family but I'm confused with my religion I felt that I need more info.. I converted when i was 29 yrs old.. I'm now 34 alhamdulillah for the guidance to the right path....Islam is the answer..