Description: A typical day in the life of a Muslim in Ramadan. 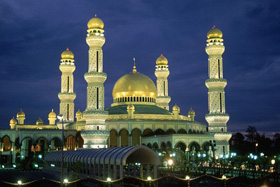 Ramadan is a very special month for the Muslims, as in it Muslims around the world perform various types of worship, the most important of them being fasting.  This fasting of Ramadan is one of the five pillars of Islam, mandatory upon all adolescents and adults who have the ability.  Ramadan is also the month in which the first revelation came to the Prophet Muhammad, and thus is called the “Month of the Quran”.  During this month, there is a noticeable change in people’s lives as well as societies.  This article will describe a typical day of a Muslim during this month of forgiveness.

“Eat a predawn meal, for indeed in it there is blessing.” (Saheeh Al-Bukhari) 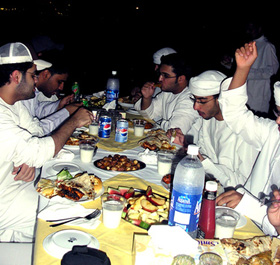 Although not obligatory, Muslims families throughout Ramadan rise early in the morning before the first traces of light and partake in a light meal in implementation of this Prophet teaching.  Usually, the day of a Muslim starts with the dawn prayer performed when the first traces of light appear in the sky, but since it is the time when one starts the fast by withholding from food or drink, the Prophet, may the mercy and blessings of God be upon him, encouraged Muslims to arise before that time and partake in a meal.

From this it is clear that the point of fasting is not that one feels hunger throughout the day, but rather that one changes their lifestyle in order for it to be more conducive to the worship of Allah, a fact which will become quite clear.  One who often misses the dawn prayer, the hardest of the five prayers to perform due to its stated time, in this blessed month arises early in order to partake in a meal.  Thus this person becomes accustomed to awakening at an early hour, ultimately helping him to perform the dawn prayer for the rest of the year.

The most beloved of the voluntary prayers is one called “Qiyaam –ul-Layl”, or the Night Prayer[1].  This prayer is performed before the dawn prayer in solitude.  It is so beloved that it is usually nicknamed “the Prayer of the Pious”, a prayer performed by the devout when the majority of people are still sleeping in their beds.  God described this prayer in the Quran, saying:

“Their sides forsake from (their) beds, calling upon their Lord in fear and in hope….” (Quran 32:16)

Waking in the early hours before dawn to eat a meal also encourage the believers to perform this blessed prayer, one which otherwise seem like an arduous task for some.

This predawn meal is to be eaten close to the time of dawn, and thus people continue to eat until they hear the mu’ezzin, or caller of prayer, call out the azaan from the local mosque, signaling that the first traces of light have appeared.  Thus, Muslims end their meal and prepare themselves to attend the congregational prayer at their local mosque, held five times a day throughout the year.

The Month of the Quran 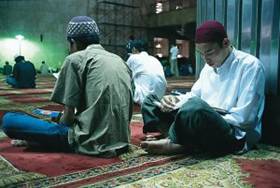 After attending the dawn prayer, many Muslims choose to sit in the mosque for a while and recite a selected portion of the Quran at this time.  Recitation of the Quran is recommended at all times, and due to it one’s faith increases in Islam:

“The believers are only those who, when Allah is mentioned, their hearts tremble with fear, and when His Verses are recited unto them, they (i.e. the Verses) increase their Faith; and they put their trust in their Lord (Alone).” (Quran 8:2)

Being the month in which the Quran was revealed, Muslims are even more zealous to recite its entirety, as this was also done by the Prophet.

“[The Prophet] would meet him (Gabriel) every night in Ramadan and they would recite the Quran to each other.” (Saheeh Al-Bukhari)

Quite often in Ramadan in the Muslim world, you will hardly find a mosque empty during any part of the day.  Muslims try to set aside time this month in order to complete the Quran and ponder its meanings.

Fasting of the Day

In most Muslim countries, workload and schedules are lightened in order to accommodate for the special features of this month.  Children go to school at a later time to accommodate for their early rise and the late night prayer, and the majority of businesses close well before dusk.  Many stores also remain open throughout the night.

During daylight hours until the sun sets below the horizon.  Muslim abstain all types of food and drink, as well as sexual intercourse with their spouses.  This creates a sense within the Muslims throughout the day that they are obeying the commands of God, as they leave things which are perfectly permissible at other times.  This created within the Muslims a conscience which encourages them to leave those deeds impermissible at all times.  Muslims, dry-mouthed from lack of water and abstaining from all types of food seen throughout the day, gain a sixth sense – God consciousness - and this is the goal of fasting the month of Ramadan.  God says in the Quran:

Fasting is a secret worship which a person offers to God.  He may very well eat and drink in privacy without anyone coming to know of it… but the trait which keeps the Muslim from doing so is this consciousness of His Lord.

For this reason, one sees that many sinful Muslims as well leave many of their sins during this blessed month, due to its sacredness, and one hopes that this will cause them to be more faithful throughout the remainder of the year.

The Prophet warned Muslims against certain sins they might easily fall into and thus ruin the goal of fasting.  The Prophet said:

“Whoever does not stop speaking falsehood and acting in accordance with it, God has no need of him giving up his food and drink.” (Saheeh Al-Bukhari)

He also warned against being provoked into behaving rudely.  He encouraged Muslims to respond to one who may provoke him by saying:

These Prophetic sayings are clear in that the main benefit of Ramadan is spiritual and moral rectitude.

Thus one finds in Muslim societies that a spirit of peace dwells in the hearts of Muslims throughout Ramadan, due to the extra worship and avoidance of all evilness and ill manners.  One finds that people are generally more easy to deal with and lighthearted, and when one lives in a society for one month in which most of the people are fasting, the sense of unity and brotherhood which results is unmatched by any other occasion, except maybe the Hajj. 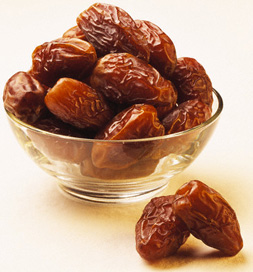 As the day ends, Muslims gather in their homes in wait for sunset.  Mothers and daughters are usually busy at this time preparing breakfast and dinner, while men usually return from their work and slip into more comfortable clothes, either taking time to recite the Quran or help out in the preparation for breakfast.  Before sunset, the family gathers at the dining table in wait for the mu’ezzin,  utilizing this time supplicating to Allah and asking Him for His Mercy.

“Indeed for each fasting person there is a prayer which is answered when they break their fast.” (Tuhfat-ul-Muhtaj)

Once the call to prayer is heard, Muslims hurry to break their fast with dates, in emulation of the Prophet, and offer words of gratitude taught by the Prophet.

“The Thirst has been quenched, and the veins have become moist and full, and the reward is certain, God willing.” (Abu Dawood)

“Oh Allah, indeed for You Alone I have fasted, and in You alone I have believed.  With your provisions I have broken my fast, and upon You I have trusted.”

Muslims then eat a light meal of various appetizers and drinks.  Many times, Muslims find themselves either invited or inviting others, whether they be members of the extended family, one’s friends, or the poor.  The majority of mosques also offer free food in order ease the sufferings for the poor.  May mosques hold iftar in order to strengthen community ties, common in countries in which Muslims are minorities.  Prophet Muhammad encouraged to feed others during this blessed month in his saying:

“Whoever gives food to a fasting person with which to break his fast, he will have a reward equal to his (the fasting person)…” (Al-Tirmidhi) 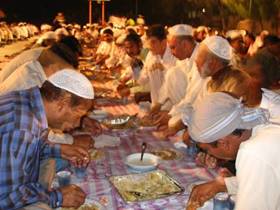 Special rations are also distributed to needy households in the beginning of the month by charitable organizations to meet the needs of the month.

The delight felt at breaking fast is one truly indescribable.  Never does the most meager of meals seem so tasty or bring so much joy to a believer.  Indeed the Prophet spoke the truth when he said:

“The fasting person will feel two moments of joy: one moment when he breaks his fast and another when he meets his Lord.” (Saheeh Al-Bukhari)

There is no time at that point to eat a large meal, as sunset is the time for another prescribed prayer.  Muslims prepare to attend the congregational prayer, mostly always at walking distance.  After attending the dusk prayer, some Muslims eat dinner, while others delay eating until the night prayer is finished, an event which is one of the main features of the night of Ramadan, another spiritual dimension of this blessed month of mercy and blessings.

[1] Literally, “The Standing of the Night” due to its lengthy recitation which is performed during standing in prayer.

Next: A Day and a Night in Ramadan (part 2 of 2): Worship of the Night

baraka alah fikom ! thanks it's interesting.

Alhamdulillah Rabil alameen thanks to Almighty Allah SWT for making me a Muslim. And appreciation goes to this organization. May Allah SWT reward you in abudant. Barakallahu laka wa baraka alaika wa jazakallahu kyrah aameen Ya Rabbal Alaameen