The Journey into the Hereafter (part 5 of 8): The Unbeliever in the Grave

Description: A description of the life in the grave between death and Judgment Day for the rejecting disbeliever. 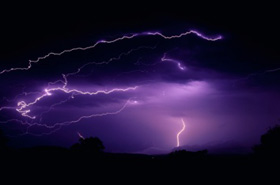 As death approaches the wicked disbeliever, he is made to feel something of the heat of the Hellfire.  This taste of what is to come causes him to plead for a second chance on earth to do the good he knew he should have done.  Alas!  His pleading will be in vain.

"Until, when death comes to one of them, he says: ‘O my Lord.  Send me back to life (on earth) in order that I may do good deeds in the things that I neglected.’  By no means!  It is only an utterance that he says.  And before them is a barrier (preventing them from returning: the life of the grave) until the Day (of Resurrection) they are ressurected." (Quran 23:99-100)

Divine wrath and punishment is conveyed to the wicked soul by hideously ugly, dark angels who sit far away from it:

The disbelieving soul will not look forward to meeting its Lord God, as the Prophet explained:

The Angel of Death sits at the head of the disbeliever in his grave and says: "Wicked soul, come out to the displeasure of Allah" as he snatches the soul out of the body.

"And if you could but see when the wrongdoers are in the overwhelming pangs of death while the angels extend their hands, saying, ‘Save yourselves!  Today you will be awarded the punishment of extreme humiliation for what you used to say against God other than the truth, and that you were, toward His verses, being arrogant." (Quran 6:93)

"And if you could not see when the angels take the souls of those who disbelieved… striking their faces and their backs and saying, ‘Taste the punishment of the Blazing Fire.’" (Quran 8:50)

The evil soul leaves the body with great difficulty, drawn out by the angels as a thronged skewer is dragged through wet wool.[1]  The Angel of Death then seizes the soul and puts it in a sack woven from hair which gives off a putrid stench, as foul and offensive as the most foul-smelling rotting corpse found on earth.  The angels then take the soul up past another company of angels who inquire: "Who is this wicked soul?"  to which they reply: "So and so, the son of so and so?" - using the very worst of names that he was ever called during his time on earth.  Then, when he is brought to the lowest heaven, a request is made that its gate be opened for him, but the request is denied.  Whilst the Prophet was describing these events, when he reached this point, he recited:

"The gates of heaven will not be opened for them and they will not enter paradise until a camel can pass through the eye of a needle." (Quran 7:40)

God will say: "Record his book in Sijjeen in the lowest earth."

…and his soul is cast down.  At this juncture, the Prophet, may the mercy and blessings of God be upon him, recited:

"He who assigns partners to Allah is as if he had fallen down from heaven and been snatched up by the birds, or made to fall by the wind in a place far distant." (Quran 22:31)

The wicked soul is then restored to its body and the two fearsome, dread-inspiring angels, Munkar and Nakeer, come to it for its interrogation.  After making him sit up, they ask:

Munkar and Nakeer: "Who is your Lord?"

Disbelieving soul: "Alas, alas, I do not know."

Munkar and Nakeer: "What is your religion?"

Disbelieving soul: "Alas, alas, I do not know."

Munkar and Nakeer: "What do you say about this man (Muhammad) sent to you?"

Disbelieving soul: "Alas, alas I do not know."

Having failed his test, the disbeliever’s head will be struck with an iron hammer with a force so violent that it would crumble a mountain.  The cry will be heard from heaven: "He has lied, so spread out carpets of Hell for him, and open for him a portal into Hell."[2]  The floor of his grave is thus set alight with some of Hell’s fierce fire, and his grave is made narrow and constricted to the extent that his ribs become intertwined as his body is crushed.[3]  Then, an incredibly ugly being, wearing ugly garments and giving off a foul and offensive odor comes to the disbelieving soul and says: "Be grieved with what displeases you, for this is your day which you have been promised."  The disbeliever will ask: "Who are you, with your face so ugly and bringing evil?"  The ugly one will reply: "l am your wicked deeds!"  The disbeliever is then made to taste bitter remorse as he is shown what would have been his abode in Paradise - had he lived a righteous life - before a portal is opened for him every morning and evening showing him his actual home in Hell.[4]  Allah mentions in His Book how the wicked people of Pharaoh are, at this very moment, suffering from such an exposure to Hell from within their graves:

"The Fire: they are exposed to it, morning and afternoon, and on the Day when the Hour will be established (it will be said to the angels): ‘(Now) cause Pharaoh’s people to enter the severest torment!’" (Quran 40:46)

The Companion, Zaid b. Thabit, narrated how, when the Prophet Muhammad and his Companions were once passing some graves of polytheists, the Prophet’s horse bolted and almost unseated him.  The Prophet, may the mercy and blessings of God be upon him, then said:

"These people are being tortured in their graves, and were it not that you would stop burying your dead, I would ask God to let you hear the punishment in the grave which I (and this horse) can hear." (Saheeh Muslim)

jazaakallahkhair........i hope each person who reads this article seeks forgiveness from ALLAH for all the sins he has committed till today and sincerely devote himself for the happiness of ALLAH.May ALLAH forgive us all and save us from going astray...........Aameen.

If a believer answers the three questions correctly, does he get any type of punishment