Dua (Supplication) (part 2 of 4): Praise God in the way He deserves to be praised

Description: The Etiquette of making Dua. 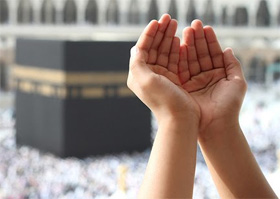 Dua is essentially submission to God and a sign of our need for God.  Dua has been called the weapon of the believer because it increases faith, gives hope and relief to the distressed and saves the supplicant from the despair and isolation.  And perhaps most importantly God loves to be asked and He encourages us to call on Him for all our needs, wants, and desires.

The renowned Islamic scholar Imam Ibn al-Qayyim described dua in the following way.  He said, “The Dua and prayers for seeking refuge with God are like a weapon, and a weapon is only as good as the person who is using it; it is not merely the matter of how sharp it is.  If the weapon is perfect and free of faults, and the arm of the person using it is strong, and there is nothing stopping him, then he can lay waste to the enemy.  But if any of these three features is lacking, then the effect will be lacking accordingly”.

It is incumbent upon us then, when we make our dua that we do so in the best possible way.  As a way of metaphorically sharpening our sword we should endeavour to call on God in the best way and with the best manners.  There is etiquette to making dua.  Following that etiquette is an indication that a person is sincere and is endeavouring to maximise his or her chances of having the dua accepted by God, who says that He will “I answer the prayer (dua) of the supplicant when he beseeches unto Me”.  (Quran 2:186)

A firm and unwavering belief in the Oneness of God is an essential ingredient for dua.  True sincerity and a willingness to accept that God Alone is able to change the course of events or grant requests is also necessary.  The supplicant should eagerly and urgently call on God, however he should remain humble and quiet without getting either exasperated or bored.  Prophet Muhammad, may the mercy and blessings of God be upon him, liked to say his dua three times and he also asked for forgiveness three times.[1]

Praising God in the way He deserves to be praised is the starting point for a person making dua.  Whilst Prophet Muhammad was sitting, a man came in and prayed and said, “O God, forgive me and have mercy on me.” Prophet Muhammad heard him and said, “You have been too hasty, O worshipper.  When you have prayed and are sitting, praise God as He deserves to be praised, and send blessings upon me, then call upon Him.”[2]  Prophet Muhammad also recommended raising one’s hands when making dua.  He said, “Your Lord, may He be blessed and exalted, is Kind and Most Generous, and He is too kind to let His slave, if he raises his hands to Him, to send them back empty”.[3]

Praising God the way he deserves to be praised essentially means recognising His Oneness.  He is the First, the Last, the Beginning and the End.  He Alone has the Power and the Strength.  Recognise this and send blessings on the Prophet Muhammad, before beseeching God

When the supplicant reaches out to God he should do so with humility.  God tells us in Quran that humility is a desirable quality and that a believer should call on his Lord with a mixture of hope and fear.  Hope that God will hear his dua and keep him safe from life’s trials and tribulations, and fear that his actions will displease his Lord.

“Invoke your Lord with humility and in secret. (Quran 7:55)

Verily, they used to hasten on to do good deeds, and they used to call on Us with hope and fear, and used to humble themselves before Us. (Quran 21:60)

And remember your Lord within yourself, humbly and with fear and without loudness in words in the mornings and in the afternoons.” (Quran 7:20)

The best times for making dua include just before Fajr (dawn prayer), in the last third of the night, during the last hour of Friday (i.e. the last hour before Maghreb prayer), when rain is falling, and between the call to prayer and iqamah (the call raised immediately before prayer begins).  Other excellent times to make dua are when the believer is in prostration.

The believer should endeavour to use the clearest and most concise words when offering his supplications.  The best duas are those used by the Prophets; however it is permissible to say other words according to the specific needs of the supplicant.  There are many wonderful collections of authentic duas and believers should take extra care to authenticate the duas they use to supplicate to God.

When making dua it is important to either say authentic duas found in the Quran or traditions of Prophet Muhammad, or the words that spontaneously come to mind when one is seeking the protection or forgiveness of God.  It is not permissible to set your own specific time, place or number of repetitions.  To do so would be an act of innovation in the religion of Islam and that is a very serious matter.

For instance when one turns to God in his darkest hour or in a moment of joy, he or she speaks from his heart with sincerity and love.  A person must never be afraid to converse with God, to pour out his heart, his longing, his love, fears and desires.   However, if one begins to make strange rituals, such as making a dua 30 times on Wednesday after Asr prayer, this is how trouble begins.  As a general rule dua must either be spontaneous or from the authentically narrated.  This is not complicated, Islam without manmade rituals and superstitions is pure devotion to God, and it is easy and comforting.