The Letter of the Prophet to the Emperor of Byzantium (part 3 of 3): Heraclius Invites His Subjects

Description: The acknowledgement that Muhammad was a prophet, the invitation made by Heraclius to his subjects, and their reaction to it.  A discussion of some legends concerning how the letter was handed down as an heirloom.

The Public Reading of the Letter 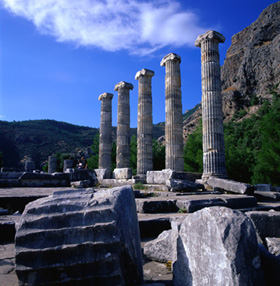 After Heraclius had confirmed that he believed Muhammad to be a prophet, he said:

“I knew that he was going to appear, but I did not know that he would be from among you.  If what you have said is true, he will rule the very the ground beneath my feet; if I knew I would definitely see him in person, I would undertake the journey to meet him; and if I were with him, I would wash his feet.”

This is in keeping with the placement of this story after the ibn al-Natur’s report of the attempt by Heraclius to foretell the future astrologically.  It is apparent that he ‘knew’, or at least suspected, that a powerful prophet had arisen among the Arab people.  It was at this stage that he asked for the letter he had received from the Messenger of God so as to read it aloud to the assembly.

“When Heraclius had finished his speech and had read the letter, there was a great hue and cry in the Royal Court, so the Meccans were ejected.  Abu Sufyan wondered aloud to his companions, “The affairs of ibn abi-Kabsha[1]  have become so prominent that even the King of the Bani-Asfar (the fair skinned ones) fears him.”

Abu Sufyan later told the narrator[2]  “I lay low, by God, and reserved, certain that the affairs of Muhammad would emerge triumphant, until God brought my heart to the point of embracing Islam.”

Meanwhile, according to ibn al-Natur’s narration, Heraclius had written a letter to a friend in Rome concerning the letter he had received[3]  whose knowledge he trusted as comparable to his own.  Then he left Jerusalem[4]  for Homs (Emesa in Roman times) in Syria, where he awaited the reply.

“When he received the reply from his friend, he saw that the man agreed that the signs portended the appearance of a new leader, and that the leader was the expected prophet.  On that, Heraclius invited all the Grandees of Byzantium to assemble in his palace at Homs.

“When his Grandees had assembled, he ordered that all the doors of his palace be closed.  Then he came out and said, “O Byzantines!  If success is your desire and if you seek right guidance and want your Empire to remain, then give a pledge of allegiance to the emerging Prophet!

“On hearing this invitation, the Grandees of the Church ran towards the gates of the palace like a herd of wild asses, but found the doors closed.  Heraclius, realizing their hatred towards Islam, lost hope that they would ever embrace Islam, and he ordered that they should be brought back to the audience room.  After they returned, he said, “What I have just said was simply to test the strength of your conviction, and I have seen it.

“The people prostrated before him and became pleased with him, and Heraclius turned away from faith.”

A legend has grown up around the events at Homs.  It is said that Heraclius first suggested that his bishops embrace Islam, but when they refused, he suggested that the Empire pay tribute to the Prophet of Islam.  When they refused this in turn, he suggested making peace with the Muslims and agreeing to a pact of non-belligerence.  When this too was refused, he left Syria for Byzantium, and gave up all interest in preserving the Empire south and east of Antioch – never taking the field against the Muslim advance in person, and sending incompetent generals as the defenders of his Middle Eastern lands.  What is certain is that he treated the letter and the claim to prophethood therein seriously, and he made every effort to sway his people before turning back.

The historian, al-Suhayli was the source of two more stories associated with the letter to Heraclius, both of which ibn Hajar included in the commentary on the stories above.[5]  He commented that al-Suhayli recalled hearing of a letter that was kept in a jeweled diamond case, which showed the high status of its owner, that had been left as an heirloom even until that day, and had reached the hands of the King of Franja.[6]  His descendants thought that it had come into his possession at the time of the conquest of Toledo,[7]  and the Commander of the Muslim Army, Abdul Malik ibn Saad came to know of it through one of these descendants[8]  in the 12th Century.  Some of Abdul Malik’s companions related that the Commander of the Muslim Army sat with the King of Franja[9], who took out the letter in its jeweled case.  When Abdul Malik saw the treasured scroll he realized it was very ancient, and asked if he could kiss the venerable antiquity.  However, the King of Franja refused to let him.

Al Suhayli further said that he had been told by more than one source that the jurist, Nuraddin ibn Saygh al-Dimashqi said that he had heard that Sayfuddin Flih al-Mansuri was sent with a gift by King al-Mansur Qalaun[10]  to the King of Morocco,[11]  who then sent the gift to the King of Franja[12]  in exchange for an unmentioned favor, which was granted.  The King of Franja invited the messenger to stay in his Kingdom for a while, but he turned the offer down.  Before he left, however, the King asked Sayfuddin if he would like to see a valuable object which may have been of interest to him (as a Muslim).  Then he had a chest brought out full of compartments, each compartment filled with treasures.

From one of the compartments he took out a long, thin diamond encrusted box (rather like a pencil case).  He opened it and took out a scroll.  The ancient paper of the scroll was damaged and the writing on it somewhat faded, but most of the body had been preserved by dint of sandwiching it between two silk cloths when rolling it for storage.  The King of Franja said: “This is the letter that my ancestor, Caesar, received from your Prophet, which has been handed down to me as an heirloom.  Our ancestor left behind a will that his descendents should keep this heirloom if they wished their rule of the Kingdom to last.  With it we are strongly protected as long as we respect the letter and keep it hidden.  So has the Kingdom come down to us.”[13]

Exactly how valid the claim that the Kingdom of Heraclius (who had officially been Caesar of the entire Roman Empire) had descended to him is questionable, as the Byzantine Empire still existed in the east, and would continue for a further 150 years.  However, Heraclius could have sent the letter to Rome, as mentioned earlier, and the letter could have been kept there and passed down into the Visigoth line of Emperors when Charlemagne was crowned Emperor in Rome by Pope Leo III in 800CE.

We cannot categorically say that the letter actually did survive the centuries, though these stories point to that possibility.  One of the Prophet’s letters still exists on its original parchment in Topkapi museum.

Many may think that Heraclius secretly became Muslim, for he sought to establish whether Muhammad’s prophetic claim was true by considering his background, motivations, and effects on his people; his character, accomplishments and message.  Judging from his reply to Abu Sufyan and the invitation to his pillars of society in Homs, he seems to have been convinced that Muhammad was genuine.  Perhaps his heart was swayed towards the monotheism expressed by Muhammad in his letter, and he certainly tried to follow his advice to avoid the sin of misguiding those he ruled.  His subjects, however, proved too strong in their rejection, and he capitulated to their pressure, unable to submit to this new faith because he feared the rebellion of the people.  For this reason, like the uncle of the Prophet, Abu Talib, who believed that Muhammad was a prophet and guarded him throughout his latter life until death but still did not submit to Islam due to the shame brought on by his peers, Heraclius died as a disbeliever in Islam and the Prophet of God..

[1] The Prophet Muhammad, may the mercy and blessings of God be upon him.

[3] It is possible he sent the actual letter from the Prophet with his request to assess it, though this is not made explicit in the narration.

[4] It is historically recorded that he in March 630CE restored the cross the Nestorians had removed from the Church of the Holy Sepulcher, which was several months after his meeting with Abu Sufyan.  He would have left for Homs soon after that.

[6] ‘Franja’ is the Spanish word used for the coastal kingdom(s) of the Iberian Peninsula. In this story the Kings of Franja are from the Jiminez and Burgundy dynasties of Asturias, Galicia, Leon and Castile (which split off from Leon). Leon came into existence when the Kingdom of Asturias was split three ways in 910.

[8] The Kings of Leon from the House of Burgundy

[9] Though not named, this would probably have been Alfonso VII ‘The Emperor’ or Ferdinand II of Castile and Leon.

[10] Possibly the Egyptian King from the Mamluk Dynasty, who ruled Egypt from 1278-90CE.

[11] Very probably Abu Yusuf Yaqub from the Merinid Dynasty, who reigned from 1259-86CE.

[13] Alfonso VII, his forefather, had been known as ‘The Emperor’ because traditionally the Kings of Leon and Asturias, being descendents of the Visigoth Holy Roman Empire, were known as pretenders to the Empire of Iberia.

Previous: The Letter of the Prophet to the Emperor of Byzantium (part 2 of 3): The Reception

if possible get a photo of that original letter from the meseum and attached it,I know it wont be easy..