The Letter of the Prophet to the Emperor of Byzantium (part 2 of 3): The Reception

Description: The portents and news of the Prophet of Islam that came to Heraclius and his checking of the author of the letter’s credentials. 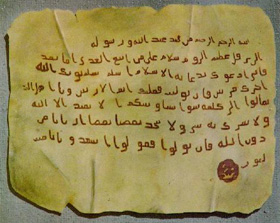 Ibn al-Natur was the Governor of Jerusalem for Heraclius, who was the head of the Christians of Greater Syria.  Ibn al-Natur narrates that once, while he was in Jerusalem:

Heraclius got up in the morning in a sad mood.  Some of the priests asked him why.

Being one who practiced astrology, Heraclius had been attempting to map out the future.

The priests replied, “Except the Jews nobody practices circumcision, and you needn’t be afraid of them; just issue orders to kill every Jew present in the country.”

While they were discussing it, a messenger sent by the King of Ghassan[1]  to convey the news of the Messenger of God to Heraclius was brought in.

(This news may have been the actual letter from the Prophet)

When he heard this, Heraclius said, “The reign of the Arabs has began and their kingdom is about to become manifest.”[2]

The following story is taken from the narratives by the companions of the Prophet.  The story was told by Abu Sufyan to Abdullah Ibn Abbas, who related it to others.[3]  Ibn Abbas was a very devoted student to Muhammad, may the mercy and blessings of God be upon him, and a well respected scholar of the Quran.

In 629CE, three years before the death of the Messenger of God, Heraclius re-conquered Jerusalem triumphantly bearing what was said to be the original cross venerated by the Christians, and which the Khosrau II had taken as booty 15 years previously.[4]  While resident there, the letter Muhammad had sent, perhaps a year earlier, came to his hand.  When he read it, he enquired about the presence of someone from the author’s people in the territory he controlled, and was told of Abu Sufyan’s trade caravan from Mecca, which was trading nearby.  He, with his companions, was summoned to the Emperor’s court in Jerusalem, appearing before Heraclius who had his Byzantine Grandees around him.

The Questions Posed by Heraclius and Their Answers

Heraclius called for his interpreter so as to question them, commanding him to ask who amongst them was the closest in kinship to the man who claimed to be a prophet.

Abu Sufyan replied, “I am the nearest relative to him (in this group).”

Heraclius asked, “And what is the relationship between you and him?”

Heraclius said, “Bring him closer!”  and had Abu Sufyan’s companions placed behind him, at his shoulders.  Then he ordered his interpreter, “Tell his companions that I am going to question him about the man who claims to be a prophet, so if he tells a lie, immediately repudiate it as a lie.”

“How is the lineage of this man among you?” the Roman Emperor continued.

“He is of noble descent.”  Abu Sufyan replied.

Heraclius further enquired, “Has anybody amongst you ever previously claimed the same as he does?”  “Was he prone to lying before he claimed what he has claimed?”  “Was anybody among his ancestors a king?”

To each question Abu Sufyan could only answer, “No.”

“Do the highborn or the humble among his people listen to him?”

Abu Sufyan replied, “The powerless, rather than the highborn, follow him.”

He said, “Are they increasing or decreasing in number?”

“They are increasing,” was the reply.

He then asked, “Does anybody amongst those who embrace his religion turn away discontent and renounce it after a while.”

Heraclius said, “Does he break his covenants?”

The caravan leader replied, “No.  We have a truce with him now, but we fear he may betray us.”

The questioning relentlessly continued: “Have you ever fought each other?”

“How do the battles turn out?”

“Sometimes he wins the battles and sometimes we win them.”

“What does he order you to do (when he preaches)?

“He tells us to worship God alone and not to worship anything along with Him, and to renounce the all the idols that our ancestors have taught us to worship.  He orders us to pray, give charity, be chaste, fulfill promises and discharge our trusts to kith and kin.”

Abu Sufyan was to later admit that he would have lied about the Prophet if he hadn’t been afraid of the shame of having his colleagues (listening behind him) spread reports that he was a liar.  So he answered as truthfully as he could.  He also mentioned the part that he had feared betrayal from Muhammad and those he led because it presented the best opportunity he had to slip in a negative statement against him.

The Emperor Assesses the Interrogation

After he had finished interrogating Abu Sufyan about the Prophet, Heraclius decided to tell him what he had learned from the interview.  His interpreter conveyed his analysis.

He said:  “I asked you about his lineage among you, and you stated that he was of sound lineage.  Indeed, all the Messengers of God come from sound lineages among their respective peoples.

“Then I asked if anybody had claimed what he claims before him among your tribe, and your reply was that none had.  If you had said others had made such a claim, I would have assumed he was following that which had been said before him.

“I further asked if you had found him a liar before he said what he said, and you said that you had not.  I know that a person who does not lie about other men would never lie about God.

“And I asked you if any of his ancestors had been a king.  If your reply had been an affirmative, I would have thought that the man was seeking to restore his ancestral kingdom.

“Then I enquired whether the highborn or the humble followed him, and you told me his followers were mainly humble people.  Indeed, they are invariably the followers of Messengers.

“Then I asked you whether his followers were increasing or decreasing, and you informed me that they were increasing.  And so it is with true faith until it is complete.

“I further asked you whether there was anybody who embraces the religion he teaches who turns away discontent and renounces it after a while.  Your reply was in the negative, which is how true faith is, when the delight of it mixes completely with their hearts.

“And I asked you whether you fought one another, to which you replied affirmatively, adding that the fortunes of war were sometimes in his favor and sometimes in yours.  So it is with all Messengers, but the final victory will be with him.

“I asked you whether he is ever treacherous, and you said he is not.  So it is with all the Messengers; they never act treacherously.

“Then I asked you what he enjoins upon you in the religion he preaches.  You stated that he orders you to worship God alone, and not associate any thing with Him, and not worship the idols of your ancestors.  And that he enjoins you to pray and give charity, to be chaste, fulfill covenants and discharge trusts.  And this is the description of what a prophet does.”

Thus did The Byzantine Caesar acknowledge the prophethood of the Messenger of God.

[1] Ghassan was vassal state of the Roman Empire in Greater Syria administered by an Arab king loyal to Byzantium.

[2] This aspect of the story will be continued in the next article.