The Letter of the Prophet to the Emperor of Byzantium (part 1 of 3): An Introduction

Description: The background and context in which the letter was written, the message it contained and how it was received.

Organization of the Article 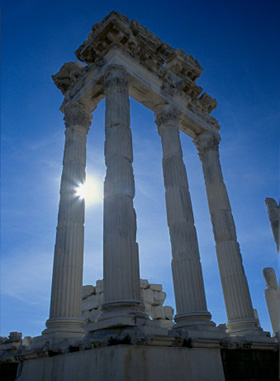 This article consists of a first part which is the background and context of the two stories that are told in the second and third part.  The main story is the narration of Abu Sufyan  ibn Harb to Abdullah ibn Abbas concerning his meeting with Heraclius in Jerusalem, recorded in the collection of Saheeh al-Bukhari.  Appended to this narration is another, whose source was the Governor of Jerusalem, ibn al-Natur.  From the events recorded in each story, it seems obvious that the invitation to Islam by Heraclius to his people in Homs happened at a later date than the meeting of Abu Sufyan with him in Jerusalem.  However, it also seems clear that Heraclius must have called for Abu Sufyan after he had heard news of the Prophet in Arabia.  Moreover, it is without doubt that when Abu Sufyan met Heraclius, the latter was in possession of the letter from the Prophet.  Thus I have split the narration of ibn al-Natur into two episodes which coincidentally occurred in two different locations.  The first episode took place in Jerusalem, before the meeting of Abu Sufyan with Heraclius there. while the second in Homs, after Heraclius left Jerusalem.  I have also placed the split narration before and after Abu Sufyan’s story.  Both stories were narrated by ibn Abbas.

Although Abu Sufyan was to eventually embrace Islam, for most of his career during the life of the Prophet, he was bitterly opposed to it.  He was the leader of the Umayyad clan of the Quraish tribe and was the chieftain of the entire Quraish tribe, making him one of the most powerful men in Mecca during the lifetime of Muhammad.  His great-grand father was Abdul Shams ibn Abd al-Manaf, whose brother was Hashim, the great-grandfather of Muhammad, so there was a distant cousin relationship between them.  It was Abu Sufyan’s position that made him an enemy of Muhammad, whom he viewed as a threat to his power and a blasphemer of the Quraish gods.  The enmity between the Quraish, of whom Abu Sufyan was a prominent leader, and the early Muslims reached such heights that many battles were fought between the two parties after the Muslims settled in Medina in which he participated, and it was he who led the army of Quraish in the Battle of Uhud in 625CE.  After the Treaty of Hudaybiyya in 628CE, he took a trading caravan to Greater Syria, and was called to Caesar in Jerusalem.  Meanwhile, the treaty with Muhammad was broken by allies of the Quraish while Abu Sufyan was on the way back to Mecca.  Knowing the Muslims were now free from the treaty made a year and a half earlier, he personally went to Medina to try and patch it up, but came away empty handed.  The Muslims subsequently attacked Mecca in 630CE.  Seeing the writing on the wall, Abu Sufyan fled the city, but later returned in order to embrace Islam.

The Prophet and the Emperor

The Prophet Muhammad and the Emperor Heraclius were contemporaries.  Born only 5 years apart, they both lived into their sixties.  The reign of Heraclius was marked by ups and downs in military success.  In 609CE, when he was 40, Muhammad received the first revelations that marked the beginning of his prophetic mission.  In 610CE Heraclius deposed Procus as Emperor and took his place, but the beginning of his reign was marked by the defeat of his armies in Palestine and Turkey between 614 and 619CE.[1]  These defeats, and the subsequent victory the Romans would enjoy, were mentioned in the Quran at the time:

“The Romans have been defeated in the nearer land; and they, after their defeat, will be victorious.  Within three to nine years.” (Quran 30:2-4)

The reconquest by the Romans of the lands ceded to Khosrau started in 625 and ended in triumph in 627CE.  The following year, Muhammad, may the mercy and blessings of God be upon him, sent the following letter to Heraclius by the hand of Dihya al-Kalbi, by way of the governor of Bostra al-Sham, in Syria.

The letter Muhammad sent is incorporated in the narration of Abu Sufyan, and I reproduce it below word for word as Heraclius read it out before all his Grandees.

In the name of God, the Beneficent, the Merciful.

This letter is from Muhammad the slave of God and His Messenger to Heraclius, the ruler of the Byzantines.

Peace be upon him who follows the right path.

I am writing this invitation to call you to Islam.[2]  If you become a Muslim you will be safe - and God will double your reward, but if you reject this invitation of Islam you will bear the sin of having misguided your subjects[3].  Thus do I urge you to heed the following:

“O People of the Scriptures!  Come to a word common to you and us that we worship none but Allah and that we associate nothing in worship with Him, and that none of us shall take others as Lords beside Allah.  Then if they turn away, say: Bear witness that we are Muslims.”

Muhammad, the Messenger of God[4]

In contrast to Khosrau II, who had been sent a similar letter earlier, the Byzantine Emperor Heraclius kept the letter and sought to find confirmation concerning what it contained.  This is quite different to the treatment accorded to his letter to Khosrau II of the Sassinid Empire.  According to Abdullah ibn Abbas, the latter was sent with Abdullah ibn Hudhafa al-Sahmi by way of the Governor of Bahrain.

“So, when Khosrau read the letter he tore it up.  Saeed ibn al-Musaiyab said, ‘The Prophet then invoked God to destroy and disperse Khosrau and his followers fully and with severity”. (Saheeh Al-Bukhari)

The Sassinid Empire was to utterly dissolve almost immediately, first through the defeat by the Romans, and then by the onslaught of the new Muslim nation.  The Byzantine Empire, too, while still under Heraclius, dissolved in Egypt, Palestine and Syria.  However, unlike the Sassinid Empire, the Byzantine Empire continued on in various forms for another 800 years until Constantinople finally fell, and this may be because of the contrast in the way each of the letters was received.

[2] That none has right to worship but God, and Muhammad is His Messenger.

[4] This letter is preserved in some history books, and a plate of the original letter was included in Khan, Dr. Majid Ali (1998). Muhammad The Final Messenger. Islamic Book Service, New Delhi, 110002 (India). One of his letters to Christian rulers is preserved in Topkapi Museum, Istanbul.

Next: The Letter of the Prophet to the Emperor of Byzantium (part 2 of 3): The Reception

congratulation for honest effort to present the story facts without editing, thus giving us the coutsey of utilizing the gift of REASON for ourselves without robbed of by your DIRECTIONAL COMMENTARY. many many thanks. sharif