Description: The weapon of the believer. 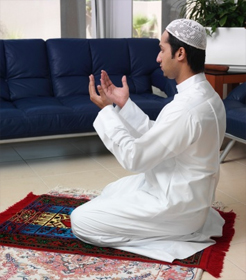 Dua – an Arabic word written here in English letters. Three small letters that make up a word and a subject that is large and breathtaking.  This word ‘dua’ could be roughly translated to mean supplication or invocation.  Although neither word adequately define dua.  Supplication, which means communicating with a deity, comes closer than invocation which is known to sometimes imply summoning spirits or devils.

In Islamic terminology dua is the act of supplication.  It is calling out to God; it is a conversation with God, our Creator, our Lord, the All Knowing, and the All Powerful. In fact the word is derived from the Arabic root meaning to call out or to summon.  Dua is uplifting, empowering, liberating and transforming and it is one of the most powerful and effective act of worship a human being can engage in.  Dua has been called the weapon of the believer. It affirms a person’s belief in One God and it shuns all forms of idolatry or polytheism. Dua is essentially submission to God and a manifestation of a person’s need for God.

Prophet Muhammad, may the mercy and blessings of God be upon him, said, “A slave becomes nearest to his Lord when he is in prostration. So increase supplications in prostrations.’’[1]  “The supplication of every one of you will be granted if he does not get impatient and say, `I supplicated my Lord but my prayer has not been granted’.’’[2]

At this point in understanding exactly what dua is, it would be easy for someone from a Christian background to think that dua is prayer. Dua certainly holds certain similarities to the prayer of Christians, however it should not be confused with what Muslims call prayer. Prayer or in Arabic-Salat, is one of the pillars of Islam, and in performing the five daily prayers a Muslim actually engages in a physical form of Dua asking God to grant them Heaven through their actions. Throughout the prayer one also supplicates to God directly.

For Muslims prayer is a set of ritual movements and words performed at fixed times, five times per day.  God says in Quran, “Verily, the prayer is enjoined on the believers at fixed hours”.  (Quran 4:103)  Muslims pray in the early morning before sunrise, in the middle of the day, in the afternoon, at sunset and at night. Prayer is an act of worship, in which a Muslim reaffirms his belief in One God and demonstrates his gratefulness. It is a direct connection between God and the believer and it is an obligation.

Dua on the other hand is a Muslims way of feeling that connection to God at anytime, in any place. Muslims call on God frequently throughout the day and night.  They raise their hands in supplication and ask for His help, mercy, and forgiveness. Dua incorporates praise, thanksgiving, hope, and calling on God to assist the one in need and grant his or her requests.

Dua can be made for the individual, their family, friends, strangers, those in dire circumstances, for the believers, and even for the whole of humanity. When making the dua it is acceptable to ask for good in this worldly life and in the hereafter. A person making dua should not hold back, but ask God to grant both the largest and smallest requests.

Prophet Muhammad, may the mercy and blessings of God be upon him, encouraged the believers to make dua.  He said, “The dua of a Muslim for his brother in his absence is readily accepted. An angel is appointed to his side. Whenever he makes a beneficial dua for his brother the appointed angel says, Ameen. And may you also be blessed with the same’”.[3]

Although making dua is not an obligation, there are many benefits to making dua to God frequently and with full submission. Feeling the closeness to God that comes with sincere dua, it increases faith, gives hope and relief to the distressed and saves the supplicant from the despair and isolation. Throughout the Quran, God encourages the believer to call on Him, He asks us to lay our dreams, hopes, fears and uncertainties before Him and to be sure that He hears every word.

And your Lord says, Call on Me; I will answer your (prayer). But those who are too arrogant to worship Me will surely find themselves in Hell, in humiliation. (Quran 40:60)

Say, O My slaves who have transgressed against their souls; despair not of the Mercy of Allah: For Allah forgives all sins; for He is oft Forgiving, most Merciful. (Quran 39:53)

Say, Call upon Allah, or call upon ArRahman (The Most Beneficient): By whatever name you call upon Him, (it is well): For to Him belong the Most Beautiful Names. (Quran 17:110)

And when My slaves ask you (O Muhammad) concerning Me, then (answer them), I am indeed near (to them by My Knowledge). I respond to the supplications of the supplicant when he calls on Me (without any mediator or intercessor). So let them obey Me and believe in Me, so that they may be led aright. (Quran 2:186)

Prophet Muhammad, may the mercy and blessings of God be upon him, called dua the essence of worship.[4]  He also  suggested that the believer  be humble, yet firm when making dua and said, “When one of you supplicates, he should not say, ‘O God, forgive me if You will,’ but be firm in asking and make the desire great, for what God gives is nothing great for Him.”[5]

When we make dua, when we call upon God in our hour of need, or express our gratefulness, or for any other reason including simply to feel the comfort of being close to God, we must remember to examine our sincerity and to check our intention. Dua must be addressed to God Alone, who has no partners, sons, daughters or intermediaries. Our intention when making the dua must be to please God, obey Him and trust Him completely.

When a person makes dua God may give him what he asked for or He may divert a harm that is greater than the thing he asked for, or He  may store up what he has asked for, for the Hereafter. God has commanded us to call upon Him and He has promised to respond to our call. In the next article we will examine the etiquette of making dua and discuss why some duas seemingly go unanswered.

Next: Dua (Supplication) (part 2 of 4): Praise God in the way He deserves to be praised

I need that duaa of your so much

So far, this is the best page I ever read may Allah bless the people who made this page for surely Allah has given people awesome knowledge

Allah normally helps those who truly worship Him alone

Yes Dua is very important for Muslim and du3a.org is the prefect website and application for dua in twitter. Regards,