The Family in Islam (part 3 of 3): Parenting

Description: A short trip through the comprehensive guide on good parenting as taught by God and His Prophet, briefly explored here, with reasons why Muslims follow such guidance. 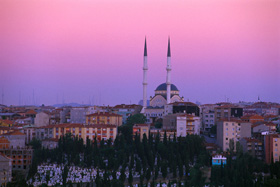 One of the reasons that the Islamic family works is because of its clearly defined structure, where each member of the household knows his or her role.  The Prophet Muhammad, may the mercy and blessings of God be upon him, said:

“Each of you is a shepherd, and all of you are responsible for your flocks.” (Saheeh Al-Bukhari, Saheeh Muslim)

The father is the shepherd over his family, protecting them, providing for them, and striving to be their role model and guide in his capacity as head of the household.  The mother is the shepherd over the house, guarding it and engendering in it the wholesome, loving environment that is necessary for a happy and healthy family life.  She is also the one who is primarily responsible for the children’s guidance and education.  Were it not for the fact that one of the parents assumed the leadership role, then inevitably there would be perpetual disputation and fighting, leading to family breakdown – just as there would be in any organization which lacked any single hierarchical authority.

“God puts forth a similitude: a (servant) man belonging to many partners, disputing with one another, and a man belonging entirely to one master.  Are those two equal in comparison?  All the praises and thanks be to God!  But most of them know not.” (Quran 39:29)

It is only logical that the one who is naturally the physically and emotionally stronger of the two parents is made head of the household: the male.

“…And they (women) have rights (over their husbands) similar (to the rights of their husbands) over them - according to what is equitable.  But men have a degree (of responsibility, etc.) over them…” (Quran 2:228)

As for the children, the fruits of their parents love, Islam lays down comprehensive morals enjoining parental responsibility and the child’s reciprocal dutifulness to its parents.

“And treat your parents with kindness.  If one or both of them attain old age in your care, never say to them a word (suggesting) disgust, nor reproach them, but address them with reverent speech.  And humble yourself out of mercy before them, and pray:  ‘My Lord!  Be merciful to them for having cared for me in my childhood.’” (Quran 17:23-4)

Obviously, if the parents fail to inculcate the fear of God within their children from an early age because they are themselves heedless, then they cannot expect to see righteous gratitude returned to them.  Hence, God’s severe warning in His Book:

“O you who believe!  Ward off from yourselves and your families a Fire (Hell) whose fuel is men and stones.” (Quran 66:6)

If the parents do indeed strive to raise their children upon righteousness, then, as the Prophet said:

“When the son of Adam dies, all his actions have ceased except [three, a continuing charity, beneficial knowledge and]  a righteous child who prays for their parent.” (Saheeh Al-Bukhari, Saheeh Muslim)

Regardless of how the parents raise their children, and irrespective of their own religion (or lack, thereof), the obedience and reverence that a Muslim son or daughter is required to show them is second only to the obedience due to the Creator Himself.  Thus His reminder:

“And (remember) when We took a covenant from the Children of Israel, (saying): ‘Worship none but God and be dutiful and good to parents, and to kindred, and to orphans and to the poor, and speak good to people, and perform the prayer, and give the alms.’” (Quran 2:83)

In fact, it is quite common to hear of elderly non-Muslims converting to Islam as a result of the increased care and dutifulness their children gave them following their (i.e. the children’s) becoming Muslims.

“Say (O Muhammad): ‘Come, I will recite what your Lord has prohibited you from: Join not anything in worship with Him; be good and dutiful to your parents; kill not your children because of poverty - We provide sustenance for you and for them…’” (Quran 6:151)

“And We have enjoined on man to be dutiful and kind to his parents.  His mother bears him with hardship and she brings him forth with hardship, and the bearing of him, and the weaning of him is thirty (30) months, till when he attains full strength and reaches forty years, he says: ‘My Lord!  Grant me the power and ability that I may be grateful for Your Favor which You have bestowed upon me and upon my parents, and that I may do righteous good deeds, such as please You, and make my off-spring good.  Truly, I have turned to You in repentance, and truly, I am one of the Muslims (submitting to Your Will).’” (Quran 46:15)

There exists in Islam a general principle that states that what is good for one is good for another.  Or, in the words of the Prophet:

As could be expected, this principle finds its greatest expression in a Muslim family, the nucleus of the Islamic society.  Nevertheless, the dutifulness of the child to its parents is, in truth, extended to all the elders of the community.  The mercy and concern that the parents have for their children is likewise extended to all the young ones.  Actually, it is not as if the Muslim has a choice in such matters.  After all, the Prophet did say:

“He who does not show compassion to our young, nor honor our elders, is not from us.” (Abu Dawood, Al-Tirmidhi)

Is it any wonder, then, that so many people, raised as non-Muslims, find what they are looking for, what they have always believed to have been good and true, in the religion of Islam?  A religion where they are immediately and warmly welcomed as members of one loving family.

“Righteousness is not that you turn your faces to the east and the west.  But righteous is the one who believes in God, the Last Day, the Angels, the Scripture and the Prophets; who gives his wealth, in spite of love for it, to kinsfolk, orphans, the poor, the wayfarer, to those who ask, and to set slaves free.  And (righteous are) those who pray, pay alms, honor their agreements, and are patient in (times of) poverty, ailment and during conflict.  Such are the people of truth.  And they are the God-Fearing.” (Quran 2:177)

Previous: The Family in Islam (part 2 of 3): Marriage