Prophecies of the Quran Addressed to Muhammad

Description: There are various prophecies mentioned in the Quran which specifically addressed Prophet Muhammad.  The fulfillment of these prophecies has been well documented in the books of seerah, or the biography of the Prophet as recorded by his disciples. 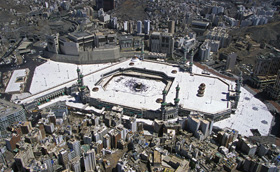 In the sixth year after the Prophet was forced to migrate from Mecca to Medina, he saw himself visiting Mecca and performing pilgrimage in a vision mentioned in the Quran:

"Certainly has God showed to His Messenger the vision (i.e. dream) in truth.  You will surely enter al-Haram mosque, if God wills, in safety, with your heads shaved and [hair] shortened[1], not fearing [anyone].  He knew what you did not know and has arranged before that a conquest near [at hand]." (Quran 48:27)

(a)  Muhammad would enter into Mecca’s Grand Mosque.

(b)  Muhammad would enter in a state of security.

(c)  Muhammad and his companions would get to perform pilgrimage and fulfill its rituals.

Ignoring the hostility of Meccans, Prophet Muhammad gathered his companions and embarked on a peaceful journey to Mecca.  But the Meccans continued to be hostile and he was forced to return to Medina.  The vision remained unfulfilled; however, an important treaty was signed between the Prophet and the Meccans, which would prove of great significance.  It is due to this treaty that Muhammad performed a peaceful pilgrimage with his companions the very next year.  The vision had found its fulfillment.[2]

The Quranic Prophecy; ‘The Unbelievers Will Lose’

Muslims were subject to severe persecution in Mecca at the hand of pagans.  At one time they were boycotted for three years, and the perpetual shortage of food sometimes bordered on famine.[3]  Any talk of victory was unimaginable.  Despite all odds, God prophesized in Mecca:

The Arabic verb yuhzamu is preceded by sa (an Arabic prefix denoting the future tense), making it a distinct prophecy awaiting fulfillment in future.  And so it was in the holy month of Ramadan, two years after the Prophet’s migration from Mecca to Medina that the Meccans were defeated in the Battle of Badr and forced to retreat.[4]  Umar, the second caliph of the Muslims after the Prophet, used to say that they did not know how the Quranic prophecy would be fulfilled until they themselves witnessed it coming true at the famous battle of Badr! (Saheeh Al-Bukhari)

The Quranic Prophecy; ‘Believers Will Get Political Authority’

Despite severe oppression at the hands of Meccans, Muslims were given good news from God:

How such a promise from Almighty God would be fulfilled to the oppressed, brutalized Muslims in Mecca was impossible to imagine at the time it was made.  It was  fulfilled, nevertheless.  Indeed, God made Muslims secure and gave them political sway in a matter of years.

"And Our word [decree] has already preceded for Our slaves, the messengers, [that] indeed, they would be those given victory." (Quran 37:171-172)

At first, the Muslims established their own state, by the invitation of the people of Medina, when God commanded they migrate there from Mecca.  Then, within the lifetime of the Prophet, that state expanded to hold sway over the whole of the Arabian Peninsula, from the Gulf of Aqaba and the Arabian Gulf to the Arabian Sea in the south, including the place from whence the Muslims had been driven out (Mecca itself).  This decree was ongoing, for the expansion of the Muslim political and religious dominion did not stop at the Arabian Peninsula.  History gives a living testimony that the Muslims addressed by these verses ruled the lands of the former Persian and Roman empires, an expansion that amazed and won admiration of world historians.  In the words of Encyclopedia Britannica:

"Within 12 years after Muhammad’s death, the armies of Islam took possession of Syria, Iraq, Persia, Armenia, Egypt, and Cyrenaica (in modern Libya)."[5]

"Have you not observed how those who are hypocrites, tell their brothers (i.e. associates) among the People of the Scripture who disbelieved, ‘If you are expelled, we will surely also leave with you, and we will never anyone against you; and if you are attacked (i.e. by the Muslim militia), we will surely aid you.’  But God bears witness that they are liars.  If they (i.e. the Jews) are expelled, they (i.e. the hypocrites) will not leave with them, and if they are fought, they will not aid them.  And [even] if they were to aid them, they will surely turn their backs; then they will not be aided." (Quran 59:11-12)

The prophecy was fulfilled when the Banu Nadhir were expelled in August 625 CE from Medina; the hypocrites did not accompany them or come to their aid.[6]

"And if those (Meccans) who disbelieve were to fight you, they would certainly turn their backs (i.e., flee).  Then they would not find a protector or a helper." (Quran 48:22)

Historically, after these verses were revealed, the unbelievers in the Arabian Peninsula were never able to withstand the Muslims again.[7]

We see from the prophecies discussed in these articles that the claim many detractors of Muhammad’s Prophethood are utterly unfounded.  They have based their criticism on the challenge to show that what Muhammad, may the mercy and blessings of God be upon him, foretold, if anything, and what came true of his foretelling.[8]  Demonstrably, he did prophesize, with God’s guidance, and demonstrably, what he was directed to tell us did actually occur.  Therefore, by the criterion of the detractors, Muhammad was the Messenger of God, and the last of the prophets to be sent, by both his statements in the Sunnah (narrations from his life) and the word of the Quran.

[8] You may say in your heart, ‘How will we know the word which the Lord has not spoken?’  When a prophet speaks in the name of the Lord, if the thing does not come about or come true, that is the thing which the Lord has not spoken.  The prophet has spoken it presumptuously; you shall not be afraid of him. (The Bible, New American Standard Version, Deuteronomy 18:21-22)