A Description of Hellfire (part 4 of 5): The Horrors of Hell I

Description: The first part of graphic suffering, horror, and punishments of Hell as detailed in Islamic religious sources. 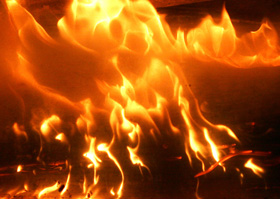 The intensity of the fire of Hell will be such that people will be willing to give up their dearest possessions to escape it:

"Indeed, those who disbelieve and die while they are disbelievers – never would the (whole) capacity of the earth in gold be accepted from one of them if he would (seek to) ransom himself with it.  For those there will be a painful punishment, and they will have no helpers." (Quran 3:91)

"One of the people of Hell who found most pleasure in the life of this world will be brought forth on the Day of Resurrection and will be dipped into the Fire of Hell.  Then he will be asked, ‘O son of Adam, have you ever seen anything good?’  Have you ever enjoyed any pleasure?’  He will say, ‘No, by God, O Lord."[1]

Few moments in Hell and the person will forget all the good times they had.  The Prophet of Islam informs us:

"On the Day of Resurrection, God will ask the one whose punishment in the Fire is lightest, ‘If you had whatsoever you wanted on earth, would you give it to save yourself?’  He will say, ‘Yes.’  God will say, ‘I wanted less than that from you when you were still in the loins of Adam, I asked you not to associate anything in worship with Me, but you insisted on associating others in worship with Me.’"[2]

The horror and intensity of the Fire is enough to make a man lose his mind.  He would be willing to give up everything he holds dear to saved from it, but he never will be.  God says:

"The criminal will wish that he could be ransomed from the punishment of that Day by his children, and his wife and his brother, and his nearest kindred who shelter him, and all – all that is on earth – so it could save him.  No!  Indeed, it is the Flame (of Hell), plucking out (his being) tight to the skull!" (Quran 70:11-16)

The punishments of Hell will vary in degree.  The torment of some levels of Hell will be greater than others.  People will be put in a level according to their deeds.  The Prophet of Islam said:

He spoke of the lightest punishment in Hell:

"The person who will receive the least punishment among the people of Hell on the Day Resurrection will be a man, a smoldering ember will be placed under the arch of his foot.  His brains will boil because of it."[4]

This person will think no one else is being punished more severely than himself, even though he will be the one receiving the lightest punishment.[5]

Many verses of the Quran speak of various levels of punishment for the people of Hell:

"and on the Day that Judgment will be established (it will be said to the angels): Cast the people of Pharaoh into the severest penalty!" (Quran 40:46)

The Fire kindled by God will burn the skin of the people of Hell.  The skin is the largest organ of the body and the site of sensation where the pain of burning is felt.  God will replace the burnt skin with a new one to be burnt again, and this will keep on repeating:

"Indeed, those who disbelieve in Our verses – We will drive them into a Fire.  Every time their skins are roasted through We will replace them with other skins so they may taste the punishment.  Indeed, God is ever Exalted in Might and Wise." (Quran 4:56)

Another punishment of Hell is melting.  When super-heated water will be poured on their heads, it will melt away the internals:

"…poured upon their heads will be scalding water by which is melted that within their bellies and (their) skins." (Quran 22:19-20)

"Super-heated water will be poured onto their heads and will dissolve through it until it cuts up their innards, expelling them; until it comes out of their feet, and everything is melted.  Then they will be restored as they were."[6]

One of the ways God will humiliate the sinful in Hell is by gathering them on Judgment Day on their faces, blind, deaf, and dumb.

"and We will gather them on the Day of Resurrection (fallen) on their faces – blind, dumb and deaf.  Their refuge is Hell; every time it subsides We increase them in blazing fire." (Quran 17:97)

"And brings an evil deed — such will be flung down on their faces into the Fire, (and it will be said), ‘Are you recompensed for anything but what you used to do?’" (Quran 27:90)

"The Fire will burn their faces and they will grin therein, their lips displaced." (Quran 23:104)

"The Day their faces will be turned over in the Fire, they will say, ‘How we wish we had obeyed God and obeyed the Messenger.’" (Quran 33:66)

Another painful punishment of unbelievers will be getting dragged on their faces into Hell.  God says:

"Indeed, the criminals are in error and madness.  The Day they are dragged into the Fire on their faces (it will be said), ‘Taste the touch of Hell.’" (Quran 54:47-48)

They will be dragged on their faces while they are tied in chains and fettered:

"Those who deny the Book (the Quran) and that with which We sent Our messengers – they are going to know, when the shackles are around their necks and the chains; they will be dragged in boiling water; then in the Fire they will be filled (with flame)." (Quran 40:70-72)