Description: Justice as a basic objective of Islam and a moral virtue, and the standard of justice envisaged by the Quran.

The Meaning of Justice 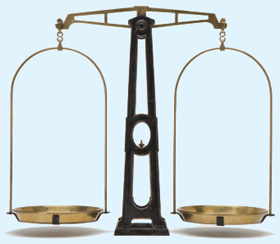 In the Islamic worldview, justice denotes placing things in their rightful place.  It also means giving others equal treatment.  In Islam, justice is also a moral virtue and an attribute of human personality, as it is in the Western tradition.  Justice is close to equality in the sense that it creates a state of equilibrium in the distribution of rights and duties, but they are not identical.  Sometimes, justice is achieved through inequality, like in unequal distribution of wealth.  The Prophet of Islam declared:

“There are seven categories of people whom God will shelter under His shade on the Day when there will be no shade except His.  [One is] the just leader.”(Saheeh Muslim)

God spoke to His Messenger in this manner:

“O My slaves, I have forbidden injustice for Myself and forbade it also for you.  So avoid being unjust to one another.” (Saheeh Muslim)

Thus, justice represents moral rectitude and fairness, since it means things should be where they belong.

The Importance of Justice

The Quran, the sacred scripture of Islam, considers justice to be a supreme virtue.  It is a basic objective of Islam to the degree that it stands next in order of priority to belief in God’s exclusive right to worship (Tawheed) and the truth of Muhammad’s prophethood.  God declares in the Quran:

And in another passage:

Therefore, one may conclude that justice is an obligation of Islam and injustice is forbidden.  The centrality of justice to the Quranic value system is displayed by the following verse:

“We sent Our Messengers with clear signs and sent down with them the Book and the Measure in order to establish justice among the people…” (Quran 57:25)

The phrase ‘Our Messengers’ shows that justice has been the goal of all revelation and scriptures sent to humanity.  The verse also shows that justice must be measured and implemented by the standards and guidelines set by revelation.  Islam’s approach to justice is comprehensive and all-embracing.  Any path that leads to justice is deemed to be in harmony with Islamic Law.  God has demanded justice and, although He has not prescribed a specific route, has provided general guidelines, on how to achieve it.  He has neither prescribed  a fixed means by which it can be obtained, nor has He declared invalid any particular means or methods that can lead to justice.  Therefore, all means, procedures, and methods that facilitate, refine, and advance the cause of justice, and do not violate the Islamic Law are valid.[1]

The Quranic standards of justice transcend considerations of race, religion, color, and creed, as Muslims are commanded to be just to their friends and foes alike, and to be just at all levels, as the Quran puts it:

“O you who believe!  Stand out firmly for justice, as witnesses to Allah, even if it be against yourselves, your parents, and your relatives, or whether it is against the rich or the poor...” (Quran 4:135)

According to another Quranic passage:

“Let not the hatred of a people swerve you away from justice.  Be just, for this is closest to righteousness…” (Quran 5:8)

With regards to relations with non-Muslims, the Quran further states:

“God does not forbid you from doing good and being just to those who have neither fought you over your faith nor evicted you from your homes...” (Quran 60:8)

The scholars of the Quran have concluded that these rulings apply to all nations, followers of all faiths, as a matter of fact to all humanity.[2]   In the view of the Quran, justice is an obligation.  That is why the Prophet was told:

“We have revealed to you the scripture with the truth that you may judge between people by what God has taught you.” (Quran 4:105)

Furthermore, the Prophet was sent as a judge between peoples, and told:

“…Say: I believe in the Scripture, which God has sent down, and I am commanded to judge justly between you...” (Quran 42:15)

The Quran views itself as a scripture devoted mainly to laying down the principles of faith and justice.  The Quran demands that justice be met for all, and that it is an inherent right of all human beings under Islamic Law.[3]  The timeless commitment of the Quran to the basic standards of justice is found in its declaration:

“And the Word of your Lord has been fulfilled in truth and in justice. None can change His Words.” (Quran 6:115)

To render justice is a trust that God has conferred on the human being and, like all other trusts, its fulfillment must be guided by a sense of responsibility beyond mere conformity to set rules.  Thus, the Quran states:

“God commands you to render trusts to whom they are due, and when you judge between people, judge with justice…” (Quran 4:58)

The reference to justice which immediately follows a reference to fulfillment of  trusts indicates that it is one of the most important of all trusts.[4]

Justice and the Self

The Quranic concept of justice also extends justice to being a personal virtue, and one of the standards of moral excellence that a believer is encouraged to attain as part of his God-consciousness.  God says:

The Prophet himself instructed:

“Be conscious of God and be just to your children.”[5]

The Quran tells the believers:

Specific Examples of Justice Encouraged in the Quran

The Quran also refers to particular instances and contexts of justice.  One such instance is the requirement of just treatment of orphans.  God says:

Fair dealings in measurements and weights, as mentioned in the above verse, is also mentioned in other passages where justice in the buying, selling, and by extension, to business transactions in general, is emphasized.  There is an entire chapter of the Quran, Surah al-Mutaffifeen (‘The Detractors in Giving Weights,’ 83) where fraudulent dealers are threatened with divine wrath.

References to justice also occur in the context to polygamy.  The Quran demands equitable treatment of all wives.  The verse of polygamy begins by reference to orphaned girls who may be exposed to depravation and injustice.  When they reach marriageable age, they should be married off, even if it be into a polygamous relationship, especially when there is inequality in the number of men and women, as was the case after the Battle of Uhud when this verse was revealed.  But, as the Quran states:

In conclusion, ‘to render justice’, in the words of Sarkhasi, a noted classical Islamic jurist, ‘ranks as the most noble of acts of devotion next to belief in God.  It is the greatest of all the duties entrusted to the prophets…and it is the strongest justification for man’s stewardship of earth.’[6]

It is good for Muslims and comprehensive

thanking you for improving our knowledge may you get reward in both lives.

Thank you for this article. I've long believed that justice is central to Islam. You've given me the facts. Now I can ask Muslims, "What are you doing to promote justice?" Islam asks lots more than just observing the five pillars.

plz shere another examples of justice

After some tempering of the waves, the pebbles become more beautiful and smooth