The Miracles of Jesus

Description: A look at some of the miracles of Jesus mentioned in the Quran, with a brief comparison with Christian sources. 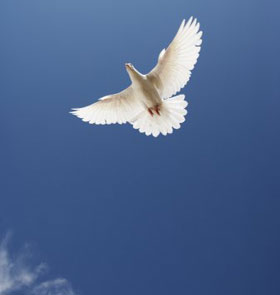 Jesus in the Quran holds one of the highest statures amongst the Prophets.  Unlike other Prophets who performed miracles, Jesus himself was a miracle, as he was born of a virgin mother, and God describes him and his mother Mary as such:

Nonetheless, in the Quran, Jesus is described as having many miracles not bestowed upon other prophets.  God says:

The following is a brief description of the miracles performed by Jesus mentioned in the Quran.

In the fifth chapter of the Quran, "The Table Laden with Food" – named after this miracle of Jesus, God narrates how the disciples of Jesus requested him to ask God to send down a table laden with food, and for it to be a special day of commemoration for them in the future.

"When the disciples said: O Jesus, son of Mary!  Is your Lord able to send down for us a table spread with food from heaven?  He said: Observe your duty to God, if ye are true believers.  They said: We desire to eat of it and our hearts be at rest, and that We may know that you have spoken truth to us, and that We may be witnesses thereof.  Jesus, son of Mary, said: 'O God, our Lord, send down for us a Table laden with food out of heaven, that shall be for us a recurring festival, the first and last of us, and a miracle from You.  And provide us our sustenance, for You are the best of providers!" (Quran 5:112-114)

Since the occasion was to be "for us a recurring festival," it is likely the Last Supper,[1]  also called the Lord's Supper, Breaking of Bread, Eucharist, or Communion.  The Eucharist has always been at the center of Christian worship.  Encyclopedia Britannica says:

"Eucharist is a Christian sacrament commemorating the action of Jesus at his Last Supper with his disciples … The letters of Paul and the Acts of the Apostles make it clear that early Christianity believed that this institution included a mandate to continue the celebration… The Eucharist has formed a central rite of Christian worship."[2]

One of the miracles mentioned in the Quran, although not mentioned in the Bible, is that fact that Jesus, while still in the cradle, spoke out to protect his mother Mary from any accusations people may have placed on her due to having a child without a father.  When she was approached about this strange incident after her childbirth, Mary merely pointed to Jesus, and he miraculously spoke, just as God had promised her upon annunciation.

"He shall speak to people while still in the cradle, and in manhood, and he shall be from the righteous." (Quran 3:46)

Jesus said to the people:

"I am indeed a slave of God.  He has given me the Book and made me a Prophet, and He has made me blessed wherever I may be.  And He has enjoined upon me prayers, and to pay the alms, as long as I live and (He has made me) kind to my mother, and He has not made me insolent, unblessed.  And may Peace be upon me the day I was born, and the day I die, and on the Day I shall be raised to life." (Quran 19:30-33)

"I create for you out of clay the likeness of a bird, then I breathe into it and it becomes a bird with God’s permission." (Quran 3:49)

This miracle is not found in the New Testament, but it is found in the non-canonical ‘Infancy Gospel of Thomas,’  "When this boy, Jesus, was five years old, he was playing at the ford of a rushing stream… he then made soft clay and shaped it into twelve sparrows… but Jesus simply clapped his hands and shouted to the sparrows: "Be off, fly away, and remember me, you who are now alive!"  And the sparrows took off and flew away noisily." (Infancy Gospel of Thomas:2)

Similar to the New Testament[3], The Quran also mentions Jesus to a have healed the blind and lepers.

The Jews during the time of Jesus were quite advanced in the science of medicine and were quite proud of their achievements.  For this reason, miracles of this nature were given by God to Jesus, ones which the Jews could well understand that no force in nature could perform its like.

6.      The Provisions of Today and Tomorrow

Jesus was given the miracle of knowing what people had just eaten, as well as what they had in store for the coming days.  God says.

"I inform you too of what things you eat, and what you store up in your houses.  Surely in that is a sign for you, if you are believers." (Quran 3:49)

A Demonstration of Truth

Similar to other prophets, Jesus performed miracles to convince skeptics of his truthfulness, not to demonstrate his divinity.  The Quran says:

These miracles were performed only by the Will of God, had he not willed them to occur, they could never come to be.  God explicitly states this in the Quran, saying that they were:

Although Muslims can not confirm it, the Bible, through certain narrations, states that Jesus at times failed to perform miracles.  Once when Jesus tried to heal a blind man, he was not healed after the first attempt, and Jesus had to try a second time (Mark 8: 22-26).  In another instance, "He could not do any miracles there, except lay his hands on a few sick people and heal them."(Mark 6:5)

The fact remains that indeed it was not through his own will that Jesus or any other prophet performed miracles.  Rather, they were performed only by Will of God Almighty - a fact also explicitly stated in the Bible:

"A man attested to you by God with miracles and wonders and signs which God performed through him in your midst." (Acts 2:22)

Alhamdulillah, May Salutate to prophet Muhammad (SAW). i read all the above Islamic narration on prophet is ibn Maryam Alaihi salam, and of of couse i got more knowledge on history of prophet Isa may Allah bless every one that made his contribution to this website. thank you

Islam is good to us