Description: The scene is set, and the child is born. 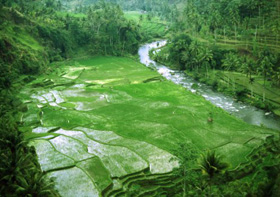 In both Judaism and Christianity Moses is a central figure.  He is the man from the Old Testament most mentioned in the New Testament, he led the Israelites out of bondage in Egypt, communicated with God and received the Ten Commandments.  Moses is known as both a religious leader and a lawgiver.

In Islam, Moses is loved and respected; he is both a Prophet and a Messenger.  God mentions him more than 120 times, and his story ranges across several chapters.  It is the longest and most detailed story of a prophet in the Quran and is discussed in elaborate detail.

The word Prophet (Nabi in Arabic) is derived from the word Naba, meaning news.  God’s message is revealed and the Prophet spreads the news amongst his people.  A Messenger, on the other hand, comes with a specific mission, usually to convey a new ordainment from God.  Every Messenger is a Prophet, but not every Prophet, is a Messenger.

Islam teaches that all prophets came to their people with the same proclamation, “O my people, worship God, you have no other God but Him”.  (Quran 11:50).  Moses called the children of Israel to worship God alone and he laid down the laws prescribed in the Torah.

“Verily, We did send down the Torah to Moses, therein was guidance and light, by which the Prophets, who submitted themselves to God's Will, judged the Jews.  And the rabbis and the priests too judged the Jews by the Torah for to them was entrusted the protection of God's Book, and they were witnesses thereto.” (Quran 5:44)

Quran is a book of guidance for all of humankind.  It is not a history book; however, it does contain historical information.  God asks us to reflect and contemplate on the stories of the Prophets in order that we may learn from their trials, tribulations, and triumphs.  Moses’ story contains many lessons for humankind.  God says that the account of Moses and Pharaoh in Quran is the truth.  It is a story of political intrigue and of oppression that knew no bounds.

“We recite to you some of the news of Moses and Pharaoh in truth, for a people who believe.  Verily, Pharaoh exalted himself in the land and made its people sects, weakening (oppressing) a group (i.e. Children of Israel) among them; killing their sons, and letting their females live.  Verily, he was of those who commit great sins and crimes, oppressors, tyrant.” (Quran 28:3&4)

Moses was born into one of the most politically charged times in history.  The Pharaoh of Egypt was the dominant power figure in the land.  He was so incredibly powerful that he referred to himself as a god and nobody was inclined or able to dispute this.  He said, “I am your lord, most high”, (Quran 79:24)

Pharaoh effortlessly exerted his authority and influence over all the people in Egypt.  He used the strategy of divide and conquer.  He set up class distinctions, divided the people into groups and tribes, and set them against one another.  The Jews, the children of Israel, were put at the lowest level of Egyptian society.  They were the slaves and servants.  Moses’ family was from amongst the children of Israel.

Egypt at the time was the known world’s superpower.  The ultimate power rested in the hands of very few.  Pharaoh and his trusted ministers directed matters as if lives of the population were of little or no consequence.  The political situation was in some ways similar to the political world of the 21st century.  In a time when the young people of the world are used as cannon fodder for the political and military games of the most powerful, the story of Moses is particularly pertinent.

According to Islamic scholar Ibn Kathir the children of Israel talked vaguely about one of their nation’s sons arsing to wrest the throne of Egypt from Pharaoh.  Perhaps it was just a persistent daydream from an oppressed people, or even an ancient prophecy but the story of Moses begins here.  A yearning for freedom coupled with a tyrannical king’s dream.

Pharaoh becomes so fanatical he sends spies or security agents to seek out pregnant women.  If any woman gives birth to a male child, he is immediately put to death.  When Moses’ mother becomes pregnant with the child destined to lead the children of Israel out of bondage, she conceals her pregnancy.  However, God wished to do a favour to those who were weak and oppressed, and pharaoh’s plans are thwarted.

The scene is set, and the child is born.  The winds of change begin to blow and God demonstrates that humans may plan and scheme but He Alone is the best of planners.