The Kaba – the Sacred House of God

Description: What is the Kaba? 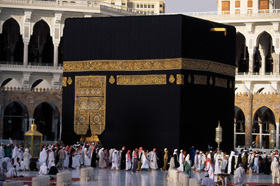 The Kaba[1]  is the sacred House of God situated in the middle of the Holy mosque in the city of Mecca, in Saudi Arabia.  The black cube shaped box is familiar to people of all faiths due to the images that come out of Saudi Arabia every year at pilgrimage time.  Usually when people see these images, their attention is focused on the black box being circled by hundreds if not thousands of worshippers.  This box is the Kaba.

The Kaba is the holiest site in Islam, and it is the qibla, the direction Muslims face when praying.  It is called the Kaba because of its shape; cube in the Arabic language is ka’b.  Sometimes the Kaba is called Al Bait Al Atiq, or the emancipated house, Prophet Muhammad, may the mercy and blessings of God be upon him, said that this name was used due to the fact that God has protected the Kaba from coming under the control of tyrants.[2]

The Kaba is made from granite taken from the hills near Mecca, and stands 15 meters (49 feet) high, the sides measure 10.5 m (34') by 12 m (39').  Today the Kaba is covered by a black silk cloth decorated with gold-embroidered calligraphy known as the kiswah.

On the southwest side of the Kaba is a semi-circular wall, this represents the border, or al hatim.  Entrance to the Kaba is gained through a door, 2.13 metres of the ground, on the north-eastern wall.  Inside, the floor is made from marble and the walls are clad with marble up to the halfway point between the floor and the ceiling.

Amongst the traditions of Prophet Muhammad we learn that his beloved wife Aisha asked about the wall and the door. She says, “I asked the Messenger of God about the wall and whether it was part of the House [the Kaba]. He said, ‘Yes.’ I asked, ‘So why is it not incorporated into the House?’ He said, ‘Your people ran out of money.’  I asked, ‘What about the door? Why is it high up?’ He said, ‘Your people did that so they could let in whomever they wanted and keep out whomever they wanted. If it were not for the fact that your people are still new [in Islam] and too close to their time of ignorance , I would incorporate the wall into the House and bring the door down to ground level.’”[3]

Verses from the Quran are written on tablets inset in the marble and the upper part of the interior wall is clad with green cloth decorated with gold embroided verses.  Lamps hang from a cross beam; there is also a small table for incense burners.  Caretakers perfume the marble cladding with scented oil, the same oil used to anoint the Black Stone outside.

The Black Stone, an ancient sacred stone, is embedded in the eastern corner of the Kaba, one and a half meters above the ground.  Prophet Muhammad, may the mercy and blessings of God be upon him, said , “The black stone came down from paradise and it was whiter than milk, but the sins of the sons of Adam turned it black”[4]

The scholars of Islam have differed on who built the Kaba. Some say that it was built by the angels.  Others say the father of humankind, Adam built the Kaba but over many centuries it fell into disrepair and was lost in the mists of time, to be rebuilt  by Prophet Abraham and his son Ishmael.  All agree that the Kaba was either built or rebuilt by Prophet Abraham.

“And (remember) when Abraham and (his son) Ishmael were raising the foundations of the House (the Kaba at Mecca), (saying), ‘Our Lord! Accept (this service) from us. Verily, You are the All-Hearer, the All-Knower’” (Quran 2:127)

Since then the kaba has been rebuilt several times.  By the Amalekites, the tribe of Jurham, Qusayy ibn Kilaab, the tribe of Quraish and several times after the advent of Islam.  Shortly before prophet Muhammad’s mission began the Kaba was built from stones, without mortar and it was not much higher than the height of a man, people had stolen treasure from the Kaba so the Quraish decided to rebuild it and add a roof.

Each tribe collected building materials and worked cooperatively until it came time to replace the black stone. Because of the prestige involved with placing the stone arguments broke out. Abu Umaiyah ibn al Mughirah one of the most senior men said, “O Quraish come to an agreement over that which you are disputing. Let the first man who enters through the gate decide the matter for you”.

The first man, was Muhammad, at that time known as al amin (the trustworthy one).  He suggested that they carry the black stone to its place in a cloak, each tribe holding an edge so that the prestige was distributed equally. The black stone reached the Kaba in this manner and Muhammad then placed the stone in its place The Kaba consists of four corners.  Finally, it is important to understand that Muslims do not worship the kaba or its surroundings.  It is simply the qibla, the direction in which Muslims face to pray,  therefore it serves as a focal point.

am reverted to islam and since 2 years am reading about islam...i am glad to open this website and this page..some days back i was reading a book of abu ameenah bilal philips on islamic syudies...it was written that in the seventh aasman there is kaba which is similar to this one and angels do tawaf all the time there ...kaba of seventh asmaan is just right above the kaba of earth...when our nabi pbuh. goes to miraj he sees many angels doing tawaf...am do not know the exact reference ....please forgive me if there is any mistake alhamdulillah