Environmental Protection in Islam (part 3 of 7): The Conservation of Basic Natural Elements - Water

Description: The role of water in the environment and the Islamic injunction for conservation of this vital element fundamental to the preservation and continuation of life. 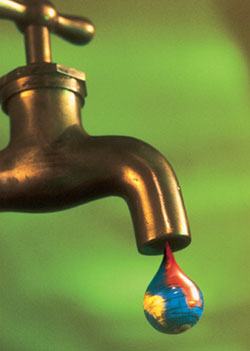 God has made water the basis and origin of life.  God says:

Plants, animals, and man all depend on water for their existence and for the continuation of their lives.  God has said:

“Verily... in the rain that God sends down from heaven, thereby giving life to the earth after its death...” (Quran 2:164)

“It is He Who sends down water from the sky; and thereby We have brought forth the plants of every kind…” (Quran 6:99)

“And you see the earth barren and lifeless, but when We pour down rain upon it, it stirs and swells, and puts forth growth of every resplendent kind.” (Quran 22:5)

“And We send down pure water from the sky, thereby to bring to life a dead land and slake the thirst of that which We have created-cattle and men in multitudes.” (Quran 25:48-49)

God has called on man to appreciate the value of this so essential source of life:

“Have you seen the water which you drink?  Was it you who sent it down from the rain cloud, or did We send it?  Were it Our will, We could have made it bitter; why then do you not give thanks?” (Quran 56:68-70)

“Say: Have you considered, if your water were one morning to have seeped away, who then could bring you clear-flowing water?” (Quran 67:30)

In addition to this vital function, water has another socio-religious function to perform which is the purification of the body and clothing from all dirt, impurities and defilement so that man may encounter God clean and pure.  God has said in the Glorious Quran:

“And He caused rain to descend on you from heaven to cleanse you therewith…” (Quran 8:11)

God has also shown us other functions of lake, sea, and ocean water.  He has made it the habitat of many created beings which play vital roles in the perpetuation of life and the development of this world.  God has said:

“It is He Who has made the sea of service, that you may eat thereof flesh that is fresh and tender, and that you may bring forth from it ornaments to wear, and you see the ships therein that plough the waves, that you may seek of His bounty.” (Quran 16:14)

“Lawful to you is the pursuit of water-game and its use for food a provision for you, and for those who travel…” (Quran 5:96)

There is no doubt that conservation of this vital element is fundamental to the preservation and continuation of life in its various forms, plant, animal, and human.  It is also obligatory, for, in Islamic law, whatever is indispensable to fulfill the imperative obligation of preserving life is therefore itself obligatory.  Any action that obstructs or impairs the biological and social functions of this element, whether by destroying it or by polluting it with any substance that would make it an unsuitable environment for living things or otherwise impair its function as the basis of life; any such action necessarily leads to the impairment or ruin of life itself and the juristic principle is, “What leads to the prohibited is itself prohibited.”

Owing to the importance of water as the basis of life, God has made its use the common right of all living beings and all human beings.  All are entitled to use it without monopoly, usurpation, despoilment, wastage, or abuse.  God commanded with regard to the people of Thamud and their camel,

“And tell them that the water shall be shared between them…” (Quran 54:28)

and the Prophet said:

“Muslims are to share in these three things: water, pasture, and fire.”[1]

Extravagance in using water is forbidden; this applies to private use as well as public, and whether the water is scarce or abundant.  It is related that the Prophet passed by his companion Sa’d, who was washing for prayer, and said:

“Is there wastage even in washing for prayer?”  asked Sa’ d;

The long experience of Muslim jurists in the allocation of water rights in arid lands has given rise to an outstanding example of the sustainable use of a scarce resource; an example which is of increasing relevance in a world where resources which were once abundant are becoming progressively more scarce.