Description: The first of a three-part article discussing the Islamic concept of Jesus: Part 1: His birth and miracles. 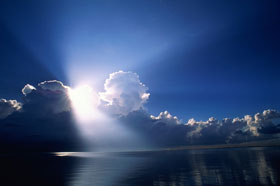 The Islamic view of Jesus lies between two extremes.  The Jews, who rejected Jesus as a prophet, called him an imposter, while the Christians, on the other hand, considered him to be the son of God and worship him as such.  Islam considers Jesus to be one of the greatest and most forbearing of prophets, in addition to Noah, Abraham, Moses and Muhammad, peace be upon them. Jesus is also considered to be the Messiah as well.  This is in conformity with the Islamic view of the Oneness of God, the Oneness of Divine guidance, and the complementary role of the subsequent mission of God’s messengers.

The message of God to humanity, which is to worship God and God alone and to live according to His instruction, was revealed to Adam (peace be upon him), who passed it on to his children.  All the subsequent revelations to Noah, Abraham, Moses, Jesus, and, finally, Muhammad are in conformity with that message.  Thus, Islam views any contradictions among revealed religions as man-made elements introduced into these religions.  The position of Jesus in the three major creeds- Judaism, Christianity, and Islam- is not an exception.

Although the Quran does not present a detailed life-story of Jesus, it highlights the important aspects of his birth, his mission, his ascension to heaven. It also passes judgment on the Christian and Jewish beliefs concerning him.  We will look at some of the truths which God revealed about Jesus in the Quran.

Born of a Virgin Mother

Like Christians, Muslims believe that Mary, Maria in Spanish, or Maryam as she is called in Arabic, was a chaste, virgin woman, who miraculously gave birth to Jesus.  Jesus’ birth in itself was a miracle in that he had no father.  God describes his birth in the Quran as follows:

“And mention in the Book (the Quran), Mary, when she withdrew in seclusion from her family to a place facing east.  She placed a screen (to screen herself) from them; then We sent to her a spirit from Us, (the angel Gabriel), and he appeared before her in the form of a man in all respects.  She said: ‘Verily, I seek refuge with the Most Gracious (God) from you, if you do fear God.’  (The angel) said: ‘I am only a messenger from your Lord, (to announce) to you the gift of a righteous son.’  She said: ‘How can I have a son, when no man hath touched me, nor am I unchaste?’  He said: ‘So (it will be), your Lord said That is easy for Me (God): And (We wish) to appoint him as a sign to mankind and a mercy from Us (God), and it is a matter (already) decreed (by God).’” (Quran 19:16-21)

This fact, however, does not necessitate that Jesus is divine in essence or spirit, nor is he worthy of worship, for Adam’s existence was more miraculous than that of Jesus.  If his miraculous birth were a proof that Jesus was God incarnate or His son, then Adam would have more right over this divinity than him.  Rather, both are prophets who were inspired with revelation from God Almighty, and both were servants to Him living according to His commandments.

Muslims, like Christians believe that Jesus performed miracles.  These miracles were performed by the will and permission of God, Who has power and control over all things.

“Then will God say: ‘O Jesus the son of Mary!  Recount My favor to you and to your mother.  Behold!  I strengthened you with the Holy Spirit (the angel Gabriel) so that you did speak to the people in childhood and in maturity.  Behold!  I taught you the Book and Wisdom, the Torah and the Gospel.  And behold: you make out of clay, as it were, the figure of a bird, by My leave, and you breathe into it, and it becomes a bird by My leave, and you heal those born blind, and the lepers by My leave.  And behold!  You bring forth the dead by My leave.  And behold!  I did restrain the Children of Israel from (violence to you) when you did show them the Clear Signs, and the unbelievers among them said: ‘This is nothing but evident magic.’” (Quran 5:110)

God sent all prophets with miracles specific to the nation to whom they were sent to prove the veracity of their message.  These miracles were not performed of their own accord; rather, they were only manifest in their hands by God's will.  The miracles performed by Jesus were no different.  The Jews were well advanced in the field of medicine, and the miracles which Jesus brought were of this nature, proving the truth of His message and in order to convince the Jews.