Description: The religious and social roles of every creature in the universe creates a balance and equilibrium which demand their preservation. 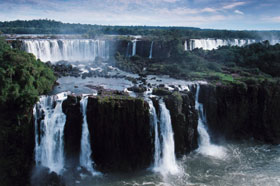 Throughout the universe, the divine care for all things and all-pervading wisdom in the elements of creation may be perceived, attesting to the All-Wise Creator.  The Glorious Quran has made it clear that each thing and every creature in the universe, whether known to man or not, performs two major functions: a religious function in so far as it evidences the Maker’s presence and infinite wisdom, power, and grace; and a social function in the service of man and other created beings.

God’s wisdom has ordained that His creatures shall be of service to one another.  The divinely appointed measurement and distribution of all elements and creatures, each performing its ordained role and all of them valuable, makes up the dynamic balance by which the creation is maintained.  Over exploitation, abuse, misuse, destruction, and pollution of natural resources are all transgressions against the divine scheme.  Because narrow-sighted self-interest is always likely to tempt men to disrupt the dynamic equilibrium set by God, the protection of all natural resources from abuse is a mandatory duty.

In the divine scheme by which all creatures are made to be of service to one another, God’s wisdom has made all things of service to mankind.  But nowhere has God indicated that they are created only to serve human beings.  On the contrary, Muslim legal scholars have maintained that the service of man is not the only purpose for which they have been created. With regard to God’s saying:

…and similar verses in which God declares that He created His creations for the children of Adam; it is well known that God in His great wisdom has exalted purposes in them other than the service of man, and greater than the service of man.  However, He makes clear to the children of Adam what benefits there are in these creatures and what bounty He has bestowed upon mankind.”[1]

Even though the societal functions of all things are vitally important, the primary function of all created beings as signs of their Creator constitutes the soundest legal basis for conservation of the environment.  It is not possible to base the protection of our environment on our need for its services alone, since these services are only of supporting value and reason.

Because we cannot be aware of all the beneficial functions of all things, to base our efforts at conservation solely on the environmental benefits to man would lead inevitably to the distortion of the dynamic equilibrium set by God and the misuse of His creation, thereby impairing these same environmental benefits.  However, when we base the conservation and protection of the environment on its value as the sign of its Creator, we cannot omit any thing from it.  Every element and species has its individual and unique role to play in glorifying God, and in bringing man to know and understand his Creator by showing him, through their being and uses, God’s infinite power, wisdom, and mercy.  It is impossible to countenance the willful ruin and loss of any of the basic elements and species of the creation, or to think that the continued existence of the remainder is sufficient to lead us to contemplate the glory, wisdom, and might of God in all the aspects that are intended.  Indeed, because species differ in their special qualities, and each evidences God’s glory in ways unique to it alone.

Furthermore, all human beings and, indeed, livestock and wildlife as well, enjoy the right to share in the resources of the earth.  Man’s abuse of any resource, such as water, air, land, and soil as well as other living creatures such as plants and animals is forbidden, and the best use of all resources, both living and lifeless, is prescribed.