The Story of Abraham (part 5 of 7): The Gifting of Hagar and Her Plight

Description: Some accounts of Abraham’s journey to Egypt, the birth of Ishmael, and Hagar’s  venture in Paran. 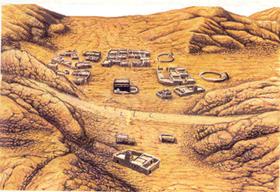 Abraham stayed in Canaan for several years going from city to city preaching and inviting people to God until a famine forced him and Sarah to migrate to Egypt.  In Egypt was a despotic Pharaoh who had the passionate desire to take possession of married women.[1]  This Islamic account is strikingly different than Judeo-Christian traditions, which say that Abraham claimed that Sarah[2]  was his sister in order to save himself from the Pharaoh[3].  The Pharaoh took Sarah into his harem and honored Abraham for it, but when his house was stricken with severe plagues, he came to know that she was the wife of Abraham and chastised him for not telling him so, thus banishing him from Egypt.[4]

Abraham had known that Sarah would catch his attention, so he told her that if the Pharaoh asked her, that she should say that she is the sister of Abraham. When they entered his kingdom, as expected, the Pharaoh asked about his relationship with Sarah, and Abraham replied that she was his sister.  Although the answer did alleviate some of his passion, he still took her captive.  But the protection of the Almighty saved her from his evil plot.  When Pharaoh summoned Sarah to act on his demented passions, Sarah turned to God in prayer.  The moment Pharaoh reached for Sarah, his upper body stiffened.  He cried to Sarah in distress, promising to release her if she would pray for his cure!  She prayed for his release.  But only after a failed third attempt did he finally desist.  Realizing their special nature, he let her go and returned her to her supposed brother.

Sarah returned while Abraham was praying, accompanied by gifts from the Pharaoh, as he had realized their special nature, along with his own daughter Hagar as well, according to Judeo-Christian traditions, as a handmaiden[5].  She had delivered a powerful message to the Pharaoh and the pagan Egyptians.

After they had returned to Palestine,  Sarah and Abraham continued to be childless, despite divine promises that he would be granted a child.  As the gifting of a handmaid by a barren woman to her husband in order to produce offspring seems to be a common practice of that day[6], Sarah suggested to Abraham that he take Hagar as his concubine.  Some Christian scholars say of this event that he actually took her as his wife[7].  Whichever case it may be, in Jewish and Babylonian tradition, any offspring born to a concubine would be claimed by the concubine’s former mistress and be treated exactly the same as a child born to her[8], including matters of inheritance.  While in Palestine, Hagar bore him a son, Ishmael.

When Ishmael was still nursing, God yet again chose to test the faith of his beloved Abraham and commanded him to take Hagar and Ishmael to a barren valley of Bakka 700 miles southeast of Hebron.  In later times it would be called Mecca.  Indeed it was a great test, for he and his family had longed for such a time for offspring, and when their eyes were filled with the joy of an heir, the commandment was enacted to take him to a distant land, one known for its barrenness and hardship.

While the Quran affirms that this was yet another test for Abraham while Ishmael was still a baby, the Bible and Judeo-Christian traditions assert that it was a result of the rage of Sarah, who requested Abraham to banish Hagar and her son when she saw Ishmael "mocking"[9]  at Isaac[10]  after he was weaned.  Since the typical age for weaning, at least in Jewish tradition, was 3 years[11], this suggests that Ishmael was approximately 17 years of age[12] when this event occurred.  It seems logically impossible, that Hagar would be able to carry a young man on her shoulders and take him hundreds of miles until she had reached Paran, only then laying him, as the Bible says, down under a bush[13].  In these verses Ishmael is referred to by a different word than the one used describing his banishment.  This word indicates that he was a very young boy, possibly a baby, rather than a youth.

So Abraham, after having sojourned with Hagar and Ishmael, left them there with a skin of water and leather bag full of dates.  As Abraham began walking away leaving them behind, Hagar became anxious as to what was happening.  Abraham did not look back.  Hagar chased him, ‘O Abraham, where are you going, leaving us in this valley where there is no person whose company we can enjoy, nor is there anything here?’

Abraham hurried his pace.  Finally, Hagar asked, ‘Has God asked you to do so?’

Feeling a degree of comfort in this answer, Hagar asked, ‘O Abraham, to whom are you leaving us?’

‘I am leaving you to God’s care,’ Abraham replied.

Hagar submitted to her Lord, ‘I am satisfied to be with God!’[14]

While she traced her way back to little Ishmael, Abraham proceeded until he reached a narrow pass in the mountain where they would not be able to see him.  He stopped there and invoked God in prayer:

"Our Lord! I have settled some of my offspring in a valley barren from any cultivation, by you Sacred House, our Lord, so they may establish the prayer.  So make the hearts of people yearn towards them, and provide them with all types of fruits that they may be grateful." (Quran 14:37)

Soon, the water and dates were gone and Hagar’s desperation increased.  Unable to quench her thirst or to breastfeed her little baby, Hagar began searching for water.  Leaving Ishmael under a tree, she began climbing the rocky incline of a nearby hill.  ‘Maybe there is a caravan passing by,’ she thought to herself.  She ran between the two hills of Safa and Marwa seven times looking for signs of water or help, later personified by all Muslims in Hajj.  Fatigued and distraught, she heard a voice, but could not locate its source.  Then, looking down in the valley, she saw an angel, who is identified as Gabriel in Islamic sources[15], standing next to Ishmael.  The angel dug into the ground with his heel next to the baby, and water came gushing out.  It was a miracle!  Hagar tried to make a basin around it to keep it from flowing out, and filled her skin.[16]  ‘Do not be afraid of being neglected,’ the angel said, ‘for this is the House of God which will be built by this boy and his father, and God never neglects his people.’[17]  This well, called Zamzam, is flowing to this day in the city if Mecca in the Arabian Peninsula.

It was not long afterwards that the tribe of Jurham, moving from southern Arabia, stopped by the valley of Mecca after seeing the unusual sight of a bird flying in its direction, which could only mean the presence of water.  They eventually settled in Mecca and Ishmael grew up among them.

A similar account of this well is given in the Bible in Genesis 21.  In this account,  the reason for moving away from the babe was to avoid seeing him die rather than a search for help.  Then, after the baby had begun wailing with thirst, she asked God to relieve her of seeing him die.  The appearance of the well was said to be in response to the crying of Ishmael, rather than her supplication, and no effort from Hagar to find help is reported there.  Also, the Bible tells that the well was in the wilderness of Paran, where they dwelt afterwards.  Judeo-Christian scholars often mention that Paran is somewhere north of the Sinai Peninsula, due to the mention of Mt. Sinai in Deuteronomy 33:2.  Modern biblical archaeologists, however, say that Mt. Sinai is actually in modern day Saudi Arabia, which necessitates that Paran be there as well.[18]

[2] Although Sarah was his half sister according to Genesis 20:12, making his marriage incestual,  Islamic sources such as al-Bukhari, assert that this was one of the three times in which Abraham had made a deceptive statement, as Sarah was his sister in faith and humanity, in order to ward off a greater evil.

[3] In addition to traditions, a less detailed story is also mentioned in the Bible, Genesis.12.11-20.

[16] A similar account is mentioned in the Bible, although its details are quite different. See Genesis 21:16-19